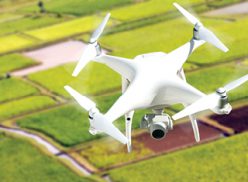 Innovative tools are increasingly being used to support the drive for improved quality and greater agricultural productivity and profitability. Locally, grape producers are literally taking to the skies to get the bigger picture of what’s happening in their vineyards.

While some producers swear by tried-and-tested vineyard sampling and observation techniques, such as physically picking grapes, taking soil samples and studying vines themselves, others are embracing distance observation. Considering the high input cost of establishing a vineyard (about R225 000/ha), you can understand why some producers are eager to explore additional means to protect their considerable investment. This article explores various methods of distance observation of vineyards and their benefits and limitations.

“Bigger producers can’t do the same amount of vineyard footwork as their smaller counterparts and need to manage their diverse growing areas from an office by using specific software,” Heinrich Schloms of VinPro says. “Distance observation and variable rate technology allow producers to address variability in the vineyard. One example of the elimination of variability is the variable application of ameliorants and fertilisers.”

For the more hands-on producers, standard soil and vineyard sampling methods can be combined with more advanced tools. One such tool is the Dassie. This vineyard robot is the flagship project of the Institute for Grape and Wine Sciences. “The robot is being developed to navigate autonomously through a vineyard and gather up-to-date high-resolution information thanks to the cameras, sensors and software it carries,” Professor Melane Vivier of the department of viticulture and oenology at Stellenbosch University says.

Unlike a drone the Dassie has the ability to survey the area underneath a vineyard canopy and its use is not hampered by legislation. Another earthbound device is the EM38 which can be attached to a quad bike and dragged behind it. This device measures soil conductivity and provides information about the water, clay, salt and sand content of soil.

Producers who are looking skywards for answers, have several vineyard management options. Unmanned aerial vehicles (UAVs), commonly known as drones, are strictly regulated in South Africa but have several advantages over satellites and manned aircraft, Dr Albert Strever of the department of viticulture and oenology at Stellenbosch University says. These include lower operating costs, the fast acquisition of high-resolution imagery and practicality, especially in smaller vineyards. Drones can fly lower, which means resolution can be as detailed as 1 cm/pixel.

Drones are also used extensively in viticulture research, Dr Strever says. “Traditionally, one or two aerial photographs are taken per season per vineyard. However this is not sufficient to detect the subtle but important changes in a vineyard. A drone allows for more flexibility, more regular images and better image resolution.

“We’ll soon be able to test and research new hyperspectral/thermal imaging technology in real time. The versatility of the UAV system will enhance viticultural research immeasurably.”

Because of financial constraints in the wine industry, many producers are unwilling to take risks with new technology, Dr Strever says. Future possibilities for drone application could include vineyard spraying and sterile insect release. For now the most important focus for innovation should be continual improvement in data and image processing.

Space system engineer and cofounder of Vine Scan Robert Pinkerton has a long history of working with various airborne observation vehicles. “Two of the satellite programmes I worked on, Magellan and LandSat 8, have direct application to the work I’m doing now. Magellan is an imager that was used to create a topographical map of the planet Venus and LandSat 8 creates photographic and infrared images of the Earth. We’re applying the same technology used on LandSat 8 to vineyards.”

Vine Scan (see www.vinescan.com) helps estates such as Vergelegen and Château de Berne in the Var region of France to apply cutting-edge technology in their vineyards. His work with drones at Vergelegen has a research and development aspect, Robert says.

“Vergelegen is an excellent site as it has a broad range of cultivars and terrains. Being a well-established winery, it has a wealth of data on each block of the vineyard. The excellent management techniques employed at Vergelegen provide us with a stable and well-documented environment from which to perform our research and development activities. This consistency gives us confidence in the imagery products we’re producing.” 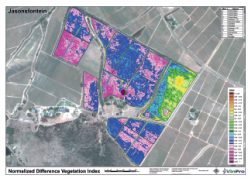 Robert agrees with Dr Strever about the need for improved data and image processing, but says an understanding of how it works is vital. “If you don’t understand precisely what’s going on in the image processing and ensure you’re producing quality imagery your results won’t have any value. It’s a complex system and just because you can fly a drone with a camera and upload the photos to a website it doesn’t mean you’re producing good data.”

If you gaze beyond the earth’s atmosphere, satellites come into play. One of the obvious advantages of satellite imagery is the huge scale, which means large areas ranging from Lutzville in the north to the Hemel en Aarde Valley in the south and Robertson to the east for instance can be imaged every single day. But higher scale means lower resolution. Depending on the satellite and resolution type you choose, the resolution can range from 1.2 to 80 m (multispectral) or 30 cm to 15 m (panchromatic). A fixed-wing aircraft allows about 5 to 10 cm and drones can yield images with resolution as high as 0.5 cm. Go to http://ow.ly/haWe309XtrJ for detailed information about various satellites, their imaging capabilities and pricing options.

A functional satellite orbiting the earth is a celebration of science and innovation. Fruitlook, which started as a research project in 2007, is an example of how this innovation can be used in practice. This free service, which is funded by the Western Cape department of agriculture, allows producers, including wine grape producers, to farm more productively by observing water usage of crops. This is done by placing images obtained through distance observation on a web platform in an accessible format.

The Normalised Difference Vegetation Index (NDVI) is used to form pictures of vineyards. By observing and capturing vineyards through multispectral imaging sensors, various aspects such as vegetative growth, disease presence and nitrogen can be studied and problems remedied. The agricultural area in the Western Cape that utilises Fruitlook has increased from 4 300 ha in 2011/2012 to 21 554 ha in 2015/2016, testimony to the fact that our producers are embracing new technology.

If producers have requirements not provided by Fruitlook, there are other options such as the Pleiades satellite, Heinrich says. “An example of the cost of imaging from a Pleiades satellite is R40 000/4 000 ha. This works out to R10 per hectare, which is surprisingly affordable. But a minimum of 2 000 ha needs to be imaged and this is where scale comes in. For a cooperative cellar, satellite imaging of 2 000 ha or more makes financial sense when compared with drones and other aircraft.” Generally speaking, imaging areas larger than 2 000 ha requires a satellite. A fixed-wing aircraft is required for areas from 200 to 2 000 ha and a drone for areas smaller than 200 ha.

Heinrich emphasises the importance of variation, most notably soil type, in vineyards. “Satellite imaging is a great tool to apply in vineyards, where variation is a given. One of the biggest causes of variation comes from soil type. To remedy this, producers can vary fertilisation, clonal and rootstock selection, irrigation and canopy management.”

Vineyard management technology is constantly advancing and numerous grape producers could use distance observation technology in a sensible way. In some cases drastic vineyard management changes might be called for, but change isn’t always easy. “Technology that highlights variation is of no use if the producer doesn’t respond with varying practices,” Heinrich says.

As the saying goes, you can bring a horse to the water but you can’t make it do backstroke. 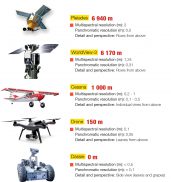