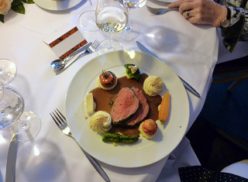 Trevor Boyd, executive chef at The Michelangelo Hotel, has been appointed as the manager of the Culinary Team South Africa for the 2020 Culinary Olympics.

Boyd’s involvement with the Culinary Olympics goes back to his first entry all the way back in 2000, and being appointed the manager of Team South Africa is the culmination of a long time dream. The team is currently preparing to the Culinary World Cup 2017 to be held in Luxembourg, where the team will get a chance to once again test their mettle.

“It was a proud moment for me to named the manager of the Culinary Team South Africa. The team has already won bronze, silver and gold medals in the past, and I’ve always been a proud member of the squad myself. Being called on to now head up the team is much the same as being called on to captain the Springboks,” Boyd says.

Boyd has served as executive chef at The Michelangelo Hotel in Sandton for the past two years, however, his passion for good food goes right back to his childhood, where he would spend hours in the kitchen with his mother, helping with food preparation. After being a chef in the army, Boyd went on to study his National Diploma in Catering Management at Wits Technikon Hotel School (now University of Johannesburg School of Tourism & Hospitality).

“I’ve clocked thousands of hours in the kitchen and so have the chefs who will be joining us on the South African team. We will spend about two years working on and refining our menus for the Culinary Olympics. When the time comes, our team needs to function like a well-oiled machine, like one entity,” Boyd explains.

Time will indeed be of the essence as the team will have just six hours to prepare a three course meal for 110 people in the hot kitchen section. Not just that, but there is a cold kitchen section where food is judged on its artistry and display. International judges will select the winners, and there is a lot at stake when it comes to winning the gold.