For the Greater Good: Everything you ever wanted to know about wine levies

The South African wine industry is well structured with four business units that provide specific services for various activities. But how is this funded? And is it sustainable? Anton Pretorius finds out. 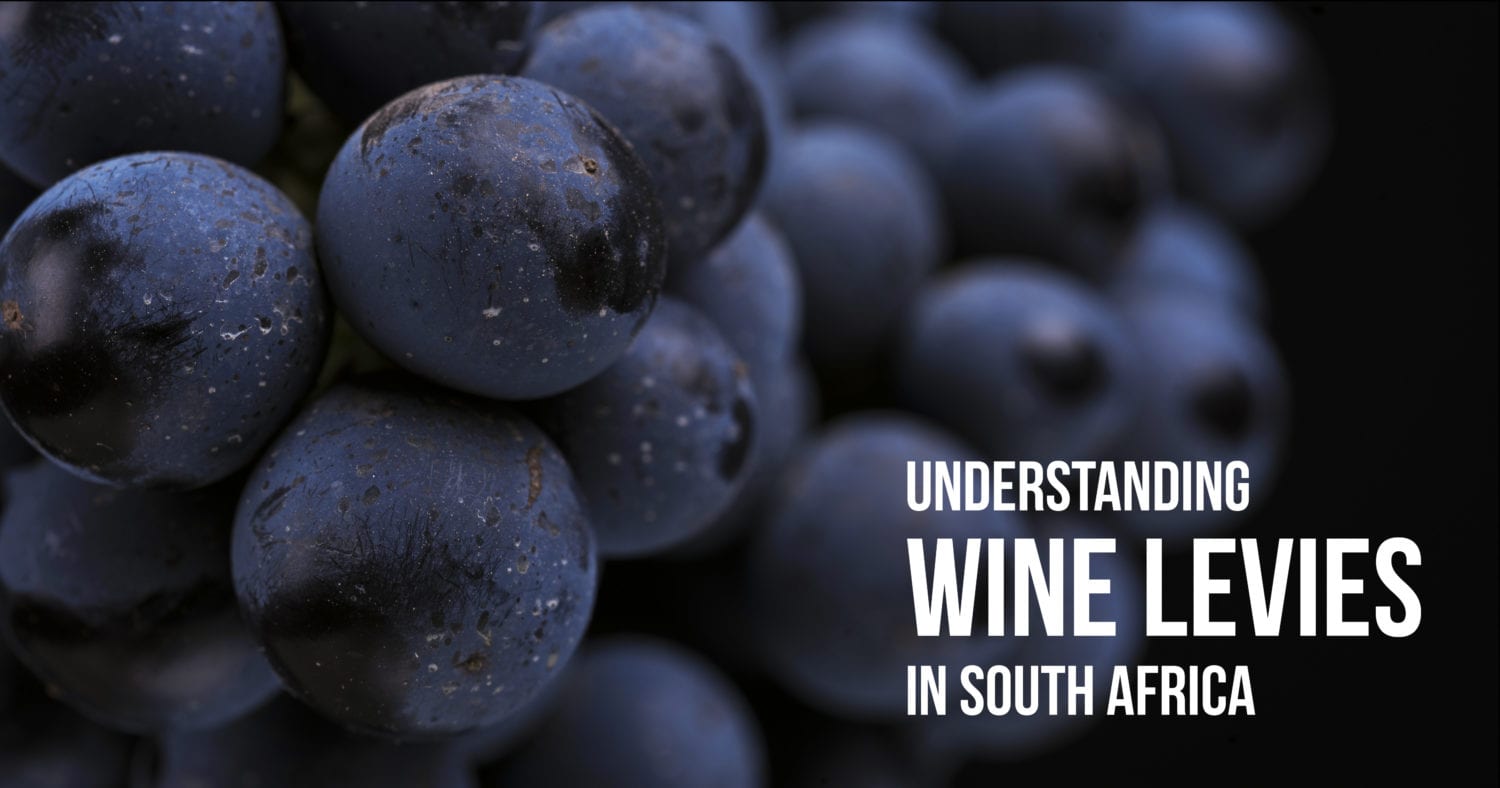 With the 2019 wine grape harvest being the smallest in 14 years, wine and grape producers grumble at the thought of paying statutory levies imposed by the National Agriculture Marketing Council (NAMC).

With margins being razor-thin, levies are usually the first expense to be scrutinised, especially when producers feel they’re not seeing a return in value.

But knowing where the money goes and what it’s used for will help producers understand that it’s not simply a case of ‘filling the coffers’, but rather to build a sustainable wine industry for future generations to come.

Firstly, it’s important to remember that statutory levies fund the long-term goals and objectives of the Wine Industry Strategic Exercise (Wise) – the official roadmap aimed at ensuring a sustainable future for a robust, adaptable and competitive industry.

A smaller harvest presents tough challenges as levies are largely volume based. The South African harvest has decreased by 16.4% over the past two years. This essentially means that there is now 16.4% less income available to make an impact or deliver on Wise’s objective.

Furthermore, South Africa’s wine export figure has decreased by 12% for the period May 2018 to April 2019 compared to the same period the year before. For Wines of South Africa (WoSA), this is a staggering 12% decrease (nearly R4.8 million) in income, thus making it hard for the organisation to fulfil its mandate.

The entire wine industry receives roughly R100 million* through statutory leviers. WoSA receives R50 million*, Winetech R32 million* and Sawis R18 million*. An estimated 20% of each business unit’s total funds is paid towards the Transformation Unit. This is over and above the estimated R3 million* of the transformation levy that’s paid to the TU.

Rico Basson, managing director of Vinpro, says every business unit funded by the levies are measured by key performance indicators (KPIs) as agreed upon and approved by the principal bodies. “This means there’s governance. This never existed before. We only started enforcing it two years ago.”

He also stresses the point that Vinpro does not benefit from statutory levies nor does it receive any financial support from government. “The industry funds itself,” he says.

“One of Wise’s objectives is to match funding from government rand for rand,” says Rico. “But other mechanisms that would be equally valuable are things like market access and trade agreements”

Despite several complaints that the imposed statutory levies are too high, the reality is that more money is required in order for the industry to remain sustainable.

“If you look at the Wise strategy holistically, the total amount is still not enough,” says Rico. “One of the current strategic actions of Wise is to obtain further funding from government or the European Union.”

Yvette van der Merwe, executive manager at the SA Wine Industry Information and Systems (Sawis) says levies are not imposed randomly and aimlessly, but that the Marketing of Agricultural Products Act provides strict guidelines with which these statutory levies must comply.

So, how does it work? Yvette explains that each wine industry business unit (Winetech, WoSA, Sawis and TU) composes a business plan, which is submitted to the respective boards of each business unit. After approval (a consultative process), the plan is submitted to Vinpro and Salba for final approval.

“At this stage, the submission focuses on the total industry impact and the contribution of each strategic program to the required levy amount. If more details are required on any particular program, enquiries are directed to the particular business unit. Vinpro and Salba need to be in agreement on the final submission to the NAMC before the application is submitted to the Minister of Agriculture.”

“The industry bodies of the wine industry won’t simply implement levies willy-nilly. Much deliberation and reasoning – with approval from both industry governing bodies (Vinpro and Salba) including the units’ respective boards – goes into determining statutory levies,” she says.

“Apart from approval from the Minster of Agriculture, the overwhelming majority of the industry through its governing bodies must also support the proposed levy.

“Nothing is done in isolation. The industry must decide and agree on the proposed implementation of levies.”

In the application to the Department of Agriculture, Forestry and Fisheries (DAFF) for the continuation of statutory measures for the wine industry by governing bodies Salba (South African Liquor Brand owners Association) and Vinpro, the objectives of the Marketing Act is clearly stipulated:

“As set out hereunder, it is submitted that the continuation of the statutory measures in question will further the objectives of the Act; will not prejudice such objectives and will not be detrimental to food security, the number of employment opportunities within the economy or to fair labour practices. In fact, it is aimed at growing the competitiveness and capacity of the industry.”

Yvette points out another important restriction. Whenever the industry applies for new levy cycles (every four years) at the NAMC, guideline prices must be declared and published in the Government Gazette. The sum of the levies may never exceed 5% of the proposed guideline price (or average wine price per litre). “Currently, we’re well below the guideline price,” she says.

According to Yvette’s calculations, 1.8% of total producer’s income is dedicated to paying statutory levies.

“A product is levied once only per levy. For example, if grapes intended for the production of wine was levied for the information levy, it cannot be levied again in another format (such as wine) for a levy.”

She also says levies are calculated per litre. Producers pay levies based on the amount of litres of wine sold and 100% of drinkable wine is subject to levy.

Non-alcoholic products are not subject to levies and with distilled wine products, only the research and development levy is applicable.

“Asking for a levy is all good and well, but ensuring that each unit executes its mandate properly (for which the levies are applied) should be the real focal point,” Yvette stresses.

According to her, this is why all of the governing bodies (like Vinpro and Salba) serve on the different units’ boards to ensure that each unit follows its mandate. The NAMC is also represented on these boards, by either a seat or as an observer.

Another important fact to mention is that 20% of each unit (Winetech, WoSA and Sawis)’s total levies are paid towards transformation in the industry. These units may also not spend more than 10% of its levy income on administration costs.

Yvette says while she understands the frustration surrounding levies, producers “must see the bigger picture.” “Levies are intended for the greater good of the industry. While several segments and individuals might not always feel they see the full value in paying levies, the view must be holistic.” 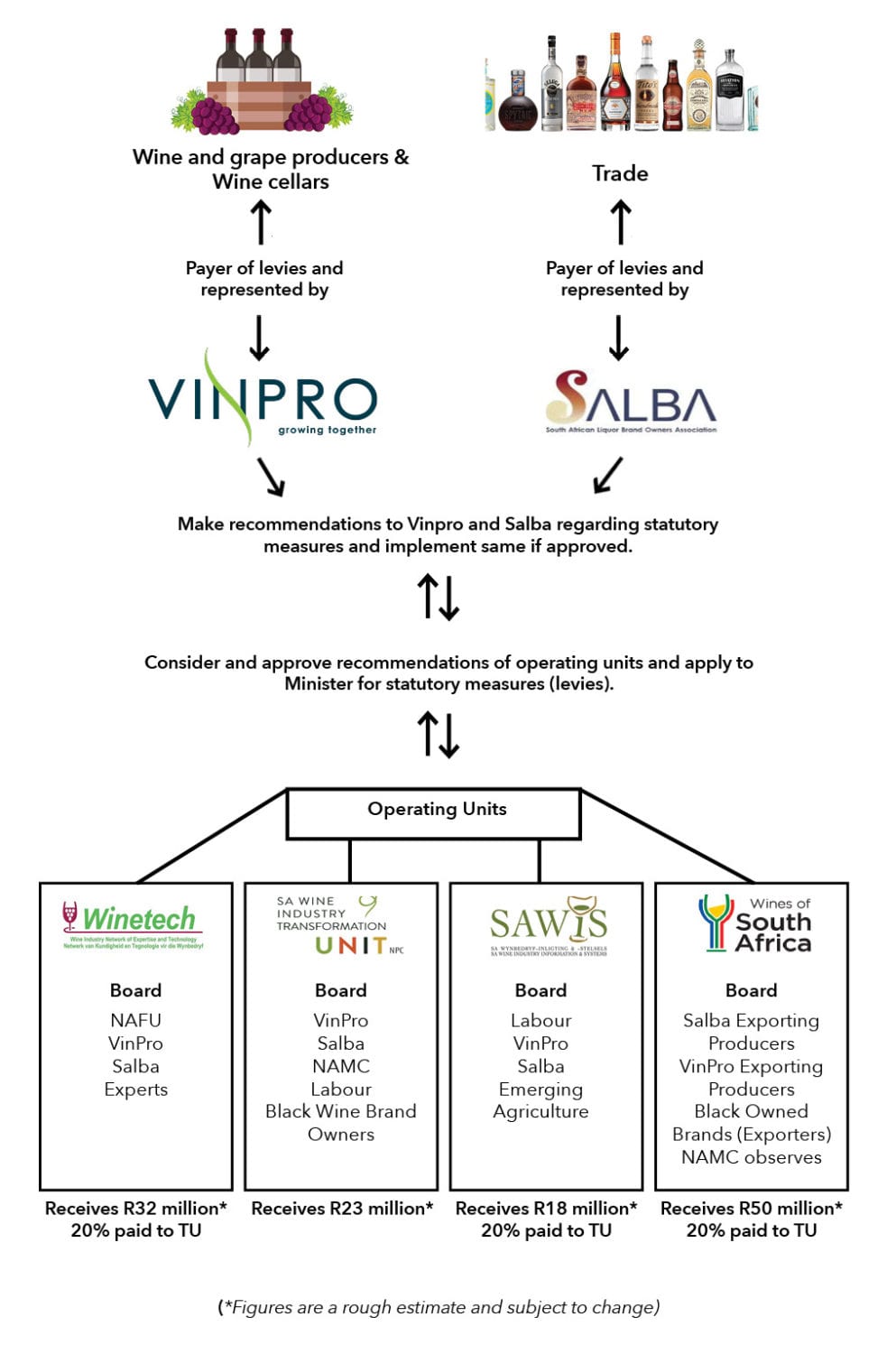 Who are the designated business units, how do they justify each levy and how does the levy benefit the industry?

Information Levy: The information levy is used to cover the expenses of Sawis in its continued implementation, administration and enforcement of the statutory measure relating to registration and records and returns and in its processing, auditing, verification and dissemination of information.

Anel Andrag, manager at Winetech, says for any industry to be sustainable, research and innovation needs to be done continuously. “Our industry is not very large and every producer or cellar cannot fund or conduct its own research. The research funded by Winetech, which is made possible by the levy, is therefore, done for everyone.”

“New technology is non-negotiable. If research is not done, the problems and issues within the industry cannot be solved. The industry must remain relevant and adopt new technology in order to be successful and competitive.”

Anel highlights some of the success stories at Winetech made possible by the research and development levy, the pioneering leafroll research that’s been adopted by several other countries, including New Zealand.

“The levy has helped fund the development of the LMS system, a software application for the administration, documentation, monitoring, reporting and presenting of training within the wine industry.”

Export Levy: The export levy is used by WoSA to generically promote SA wines in selected export markets and to improve the efficiency of the export process. WoSA’s vision for South Africa is to be recognised globally as a producer of premium quality, interesting and distinctive wines supported by the fact that we do this in the world’s most beautiful and diverse winelands, but also in an environmentally sensitive and ethically responsible manner.

According to WoSA CEO Siobhan Thompson, the export levy benefits both the producer who exports to countries where WoSA is active in terms of building Brand SA’s wine as well as importers of various SA brands.

“The only way we will get this done is to create a generic platform. This will assist brands who do not individually have the funds to do this job. By jointly contributing to a levy, a platform is created which can benefit all and will allow brands the space to start building their own brands instead of just focussing on the ‘Brand South Africa’ job, which needs to be done upfront.”

Transformation Levy: The transformation levy is used to pay the administration costs of the South African Wine Industry Transformation Unit (TU), but also to effect the priorities as highlighted. According to Wendy Petersen, operations manager at the TU, the unit’s mandate requires funding for enterprise development, skills development and training, socio-development including ownership and land reform initiatives. 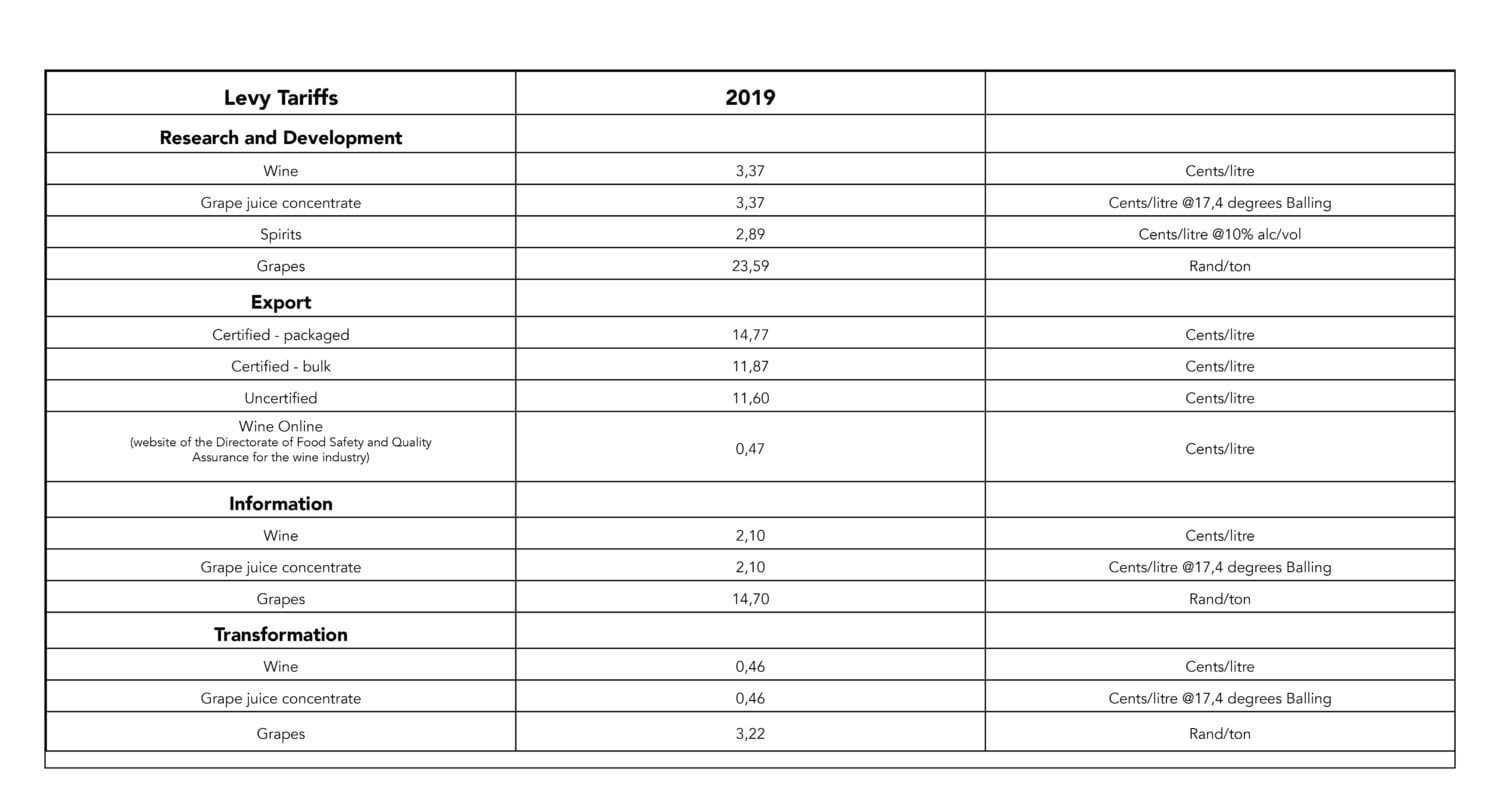 (*Amounts are rough estimates and subject to change)