With the fourth industrial revolution upon us, driven by large-scale automation, emergent technologies, big data and artificial intelligence, and superpowers retreating to their corners, the global marketplace resembles a boxing ring where more than only punches are being traded. 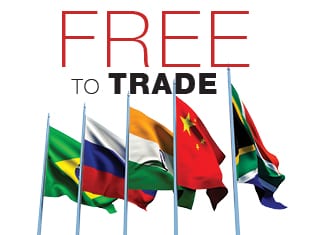 THE FIRST DOMINO
The Cobden-Chevalier Treaty is regarded as the first modern trade agreement. Negotiated in secret by British merchant-politician Richard Cobden and French economist Michel Chevalier in late 1859, it was publicly announced in a letter by French emperor Napoléon III (who initiated the Bordeaux Wine Official Classification system) on 5 January 1860. In the treaty Britain and France agreed to mutually lower trade tariffs. More importantly, it contained a most-favoured nation (MFN) clause, granting preferential access to trade.

Originally more like exclusive clubs, modern-day MFNs ensure fair competition and equitable trade among members. The World Trade Organisation (WTO), which deals with the global rules of trade between 164 member nations, states: “Every time a country lowers a trade barrier or opens up a market, it has to do so for the same goods or services from all its trading partners – whether rich or poor, weak or strong.”

PLAYING FAVOURITES
Trade agreements can be unilateral, extended by one country to others, or reciprocal arrangements that apply to all members. For instance, the African Growth and Opportunity Act (Agoa) is a unilateral trade agreement under which America provides sub-Saharan countries duty-free access to its market, with a list of products (the generalised system of preferences or GSP) singled out for privileged access.

Reciprocal free trade agreements (FTAs) are the nuclear bombs of trade agreements, effectively wiping out trade barriers and eliminating tariffs. But under WTO rules they must apply to “substantially all the trade” or at least 80% of it. An FTA can’t cover only one sector such as agriculture.

WHAT’S YOUR PREFERENCE?
Preferential trade agreements (PTAs) are more limited than FTAs and may contain a so-called “enabling clause” that relaxes MFN requirements in some circumstances. This clause allows developed countries to give more favourable treatment to developing members and forms the legal basis of GSPs such as the one included in Agoa.

The distinction between “developed” and “developing” countries is left to each country to decide. South Africa has self-identified as a developed nation since the ’90s. The WTO also recognises a list of least-developed countries as designated by the UN.

BANDS OF BROTHERS
The 2004 Southern African Customs Union (Sacu), comprising Botswana, Lesotho, Namibia, South Africa, and Swaziland, stipulates all FTAs must be negotiated as a single bloc. This means South Africa can’t initiate new FTAs on its own. Sacu is the oldest customs union in the world and part of a systemic regional integration plan that aims to improve market integration and industrial and infrastructure development among its members.

President Cyril Ramaphosa signed the African Continental Free Trade Area (AfCFTA) agreement with the African Union in July. Through the Southern African Development Community (SADC), South Africa has an FTA with 14 other African countries. International FTAs with Europe exist through the SADC-EU economic partnership agreement, which allows 98.7% of South Africa’s exports to enter the EU duty free, and Sacu-EFTA (European Free Trade Association, comprising Switzerland, Norway, Lichtenstein and Iceland). Negotiations for a tripartite FTA with two other African economic unions, the Common Market for Eastern and Southern Africa or Comesa and the East African Community or EAC, are close to being concluded. (For more info, go to sacu.int.)

The Sacu-Mercosur (Common Market of South America) PTA came into effect on 1 April 2016. It includes preferential access for specific products, with the exclusion of wine, to Argentina, Brazil, Paraguay and Uruguay, and was the first trade agreement concluded by Sacu as a single entity. Another promising PTA in the works since 2006 is with India. As South Africa’s sixth largest trade partner, this developing market represents 4.9% of SA’s imports and 4.1% of exports over the past year. But what about America, China and the UK?

ON THE ROPES
An attempt was made to establish an FTA between SA and America in 2003, but negotiations collapsed in 2006, says Michael Mokhoro, stakeholder relationship manager for the wine and brandy industry. The two countries enjoy a good trade relationship and are investigating a more reciprocal deal once Agoa expires in 2025. That said, the current trade war between America and China could still have adverse consequences unless cooler heads prevail.

The reasons South Africa doesn’t have a free trade deal with China are complex. There are many interests to consider and even an otherwise beneficial agreement might lead to unacceptable losses in politically sensitive sectors, such as telecommunications, clothing and textiles. The risks may balance out in the long term, but voters and trade union members may be loath to see the bigger picture if their jobs are on the line. Meanwhile the Brics countries, comprising Brazil, Russia, India, China and South Africa, maintain a powerful platform for cooperation.

South Africa’s duty-free benefits from the SADC-EU EPA are secure while Brexit unfolds. But this is not a time to be complacent. A study last year by Western Cape agricultural economist Andrew Partridge found the real danger lies in allowing tariffs to revert to MFN rates, which are much higher. A new Sacu-UK FTA is by far the preferred outcome after the implementation period ends in 2020. In the meantime the focus should be on negotiating favourable quotas and protecting geographic indicators. Australia is for instance campaigning to preserve its burgeoning prosecco industry in a post-Brexit FTA with the EU.

STAYING ON OUR FEET
Needless to say, comprehensive trade agreements can have a massive impact on a country’s economy. Wine writer and journalist Joanne Gibson contends it was the double setback of Britain’s termination of preferential import duties for Cape wines, immediately followed by Cobden-Chevalier in 1860 that ensured the demise of South Africa’s first branded wine export, Vin de Constance. The phylloxera epidemic came years later and simply finished the job.

Apart from tariffs and duties, there are also non-tariff barriers that determine how goods make the journey through customs. Memorandums of agreement allow countries to cooperate on specific issues. Although they can’t provide preferential market access, they can grease the wheels and pave a way forward.

South African trade and industry minister Rob Davies suggested just such an approach ahead of the 2016 Brics meeting in Goa. He said the bloc should “adopt a practical and gradual approach of identifying opportunities in important sectors to create value chains in the five emerging economies” rather than aim for an ambitious FTA.

While the world’s economic giants are jockeying for position, SADC countries have an opportunity to negotiate a flexible policy space so they can reap the benefits of the fourth industrial revolution.