A French affair in Africa

One of France’s leading wine producers regards South Africa as the next big thing and is putting its money where its mouth is. 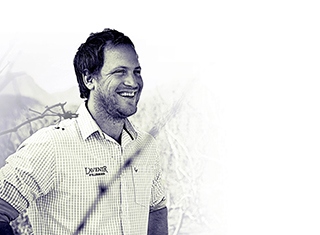 French wine company AdVini recently added the former Distell estate, Le Bonheur, to its growing list of South African properties, which includes L’Avenir and a majority share in Ken Forrester. In an exclusive interview with WineLand, AdVini’s director of its South African operations, Naretha Ricome, explains why the Western Cape is such a lucrative global wine investment.

“AdVini South Africa’s objective is to be an industry leader and this entails investment ahead of the curve,” says South African-born Ricome, who effortlessly switches from French to Afrikaans. “The same thing happened in Lanquedoc in the south of France. For decades it was written off as a region for substandard, entry level wine. Yet now it’s probably one of the most exciting regions in France to do business.”

She argues that it’s easier to wake up a South African giant than to develop a property in the established environment of the French wine industry. Advini subsequently followed opportunity to the Southern tip of Africa. Ricome emphasises that the SA investment is first and foremost about realising the promise of growth. “Make no mistake, we considered other regions. In fact AdVini already has Chilean interests and considered Australia and Argentina. We’re fully committed to playing a role in social development, but this was not a philanthropic decision – it’s about wine and business.”

Several winemaking trends in South Africa appealed to the French. L’Avenir was the guinea pig, Ricome quips. It not only 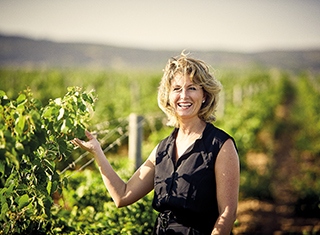 revealed potential for growth, but also the prospect of South African Pinotage and Chenin Blanc becoming world-beaters. AdVini is motivated by leadership and becoming the leaders of premium Chenin Blanc and Pinotage is part and parcel of AdVini’s commitments in South Africa, she says.

“My French colleagues were especially impressed by the growing focus on terroir and the way that South African winemakers are open to sharing information, winemaking tips and even wine – which is not always the case in many French regions,” she says.

AdVini’s strategy involves identifying “the right wine people”, ownership and managing the value chain. “This approach applies in all our operations,” Ricome says. “South Africans will still play the lead role in making and selling the wine, but AdVini’s influence kick in when it comes to a global network, distribution, expertise and influence.”

While AdVini is aware of the social and political challenges in South Africa, the opportunities still outweigh the risks, Ricome says. European vineyards are shrinking, which has also prompted AdVini’s global expansion efforts. The weak rand and relative affordability of top properties in Stellenbosch also played a crucial role. The French cherish culture so the importance of overlaps in values, wine culture, rugby and French heritage is not be discounted. “The properties in which we invested were no coincidence,” Ricome says. “It’s all about terroir, people and, of course, emotion! You can imagine how alluring names like L’Avenir [the future] and Le Bonheur [happiness] in Africa can be to the French!” she says with a laugh.

First L’Avenir, then Ken Forrester and now Le Bonheur. “What’s next?” I can’t help asking. This is only the beginning, Ricome says, adding that AdVini wants to send a clear message to South Africa that it’s investing in its wine industry and people.

“We’re building an enticing South African portfolio, with L’Avenir and its clear focus on Pinotage and Chenin Blanc as the pinnacle. This suits L’Avenir’s winemaker, Dirk Coetzee, who loves making creative and appealing wines, and slots in perfectly with the company’s pillar of emotion and creativity.”

AdVini was a pioneer in the production of biodynamic wine in Roussillon, France, and the process of switching L’Avenir to biodynamic production has already begun. Coetzee’s challenge is clear: To become the leader in premium Stellenbosch Pinotage and Chenin Blanc.

As part of creating an attractive South African portfolio, it’s important that the various local offerings are not in direct competition with one another. Several properties were considered, but after comprehensive analyses and consideration, Le Bonheur’s terroir sealed the deal.

“A lot of investment will follow, particularly in the vineyards,” Ricome says. “The opportunity to take Le Bonheur to the next level – especially in terms of Sauvignon Blanc, Cabernet Sauvignon and the increasingly popular Cabernet Franc – is palpable. Improvements in the vineyard have already commenced. We’re in it for the long haul and believe Le Bonheur could again become a Stellenbosch great.”

Ken Forrester Vinyards’ allure was its strong brand, which also comprises products with significant scale and established markets. The Ken Forrester brand will be distributed across Europe and Asia by AdVini, while Ken and his team will maintain growth in their current North American and English markets. Ken also stays on as chief executive officer to manage this business.

AdVini has registered Maison du Cap as the smart solutions leg of its South African operations. Innovation has been a hallmark of AdVini’s success and will offer the flexibility, facilities and resources to create new concepts, brands and other initiatives, Ricome says.

“This is probably one of the most exciting aspects of AdVini’s full-on expansion of its South African business. It not only brings the expertise, networks and resources of a business that’s 120 years old, but a business model which enables synergy and creativity – concepts that naturally bode well for South Africa.”