Frost damage in 2017 in the Breede River valley

This article is not intended to be a comprehensive discussion of the various forms of frost, but rather how to manage a vineyard following frost damage.

In recent years the Breede River valley has been severely afflicted by spring frost in the vineyards. The lower lying areas alongside the Breede River are especially vulnerable. Over the past 21 years severe frost damage occurred in 1997, 2016 and again in 2017.

The current drought conditions gave rise to increased frost hazard. Producers differ about the type of frost that occurred this year. In many instances frost occurred in the traditional areas, in other words in the valley and in low-lying vineyards. Physically white ice crystals could be observed, thus indicating white frost. But in many instances there were no ice crystals, consequently it was black frost that occurred. It seems as though a combination of white and black frost caused extensive damage this year.

The entire region was on frost alert. With the devastating frost of 5 October, especially, producers had been warned in advance. Methods to thwart frost included amongst others making fires (smoke reduces heat radiation thereby offsetting frost), irrigation of vineyards, spraying of water using mechanical sprayers and flattening of weeds or cover crops in anticipation of the event.

How to handle vineyards that had been subjected to frost damage

The big question is: What should a producer do in vineyards that had been subjected to frost damage? The required action can only be determined following a visit and evaluation of the damage. The most important viticultural consideration is to ensure that there will be a properly ripened and fertile bearer for pruning purposes the following winter. The producer tries to save as much as possible of the crop or even to obtain more bunches for the current season. Once again there are no clear cut answers. On a farm in the Aan de Doorns area a trial was conducted on Chardonnay following the 2016 frost. Three treatments were applied, namely (1) did nothing, (2) suckered all the shoots and (3) pruned back the green spurs to one (green) bud. At the time of harvest the grapes were picked and weighed per section. The results were as follows:

The results of this trial appear to be cultivar bound. Chenin blanc and Colombar blocks that were subjected to frost this year did not react in the same way at all and preliminary visual observation indicates less grapes. A block of Pinotage in which all canes were broken last year, produced a crop of about 7 t/ha.

Strategy for the prevention of spring frost 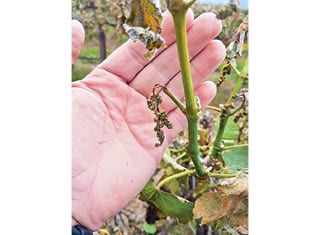 Cane with flower clusters that succumbed to frost. 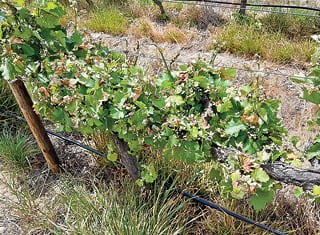 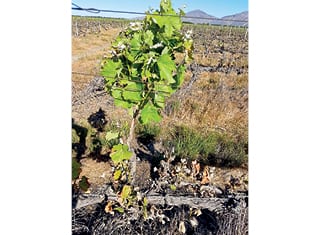 Cazenave shoot that was not damaged and indicates the height of the frost. 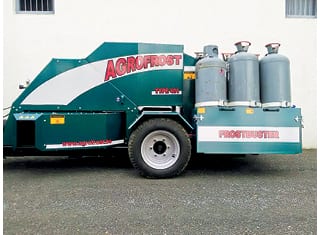