Future legends in the making 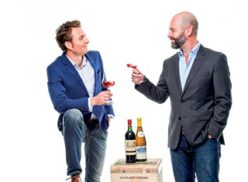 Discovering new talent and a passion for the Young Guns platform and SA’s winemaking evolution are among the things Wine Cellar director Roland Peens and South African Portfolio manager James Pietersen have in common. We asked them what it takes to become a Young Gun.

What is Young Guns?

Roland: It’s a platform for emerging winemaking talent in SA. Our annual Young Guns event takes place in Cape Town and Johannesburg and has become one of the most anticipated wine tastings of the year. We try to make the event as entertaining as possible with plenty of interaction, live Twitter feeds, music and candid stories from the young winemakers. For this year’s tasting, titled Back to Basics, we want to showcase cool new wines and winemakers without all the snobbery.

Who are these Young Guns?

James: They’re winemakers who produce wines for themselves and are all personally invested in their projects. Most importantly, they’re not constrained by vineyards, marketing managers, market demands or formulaic winemaking. They’re pushing the boundaries of fine wine in South Africa and we believe producing some of the most dynamic and exciting wines in the world today. They produce interesting grape varieties such as Grenache, Carignan and Sémillon – you won’t find any Sauvignon Blanc and Merlot among their offerings. Their stick to basic, traditional winemaking techniques that are often different to what’s taught at university. Young Guns typically produce small volumes so their wines are limited and not freely available, except from winecellar.co.za of course.

What are this year’s Young Guns about?

James: Most of the nine dynamic winemakers we’ve selected this year have full-time day jobs, so their wines are a personal side project. Starting small they’ll slowly grow their volumes and then go full time.

Initially all the Young Guns came from the Swartland, which has been a breeding ground for more daring winemaking. No doubt their enthusiasm has been ignited by revolutionary figures such as Eben Sadie, Adi Badenhorst and the Mullineuxs. This year, most are Stellenbosch-based, showing that the status quo is changing in the most traditional of wine regions.

The 14 wines on show vary from Pinot Noir from Villiersdorp, Chenin from Stellenbosch, Sémillon from Elgin and many in-between. We’re excited to showcase a host of new labels, styles and personalities who are pushing the boundaries and are future legends in the making.

James: It all started in 2011 when we realised there was no platform for young winemakers who were bucking the trend and making interesting wines. We never thought that each year since would produce a new crop of young guns looking to make a name for themselves. We’re proud to say Young Guns is now a high point on the wine industry’s calendar and a departure from the often-snobby traditional format of many wine-tasting events. We were the first to feature wines from the likes of Craig Hawkins, Chris Alheit, Peter-Alan Finlayson, Donovan Rall and a host of other winemakers who are now among SA’s winemaking elite.

Young Guns has grown from strength to strength over the years. How did the idea for Young Guns first arise and what was your motivation behind creating this platform?

Roland: The wine industry is small and most of South Africa’s finest and most exciting wines find their way to Wine Cellar. In fact, we’re often the starting point for many new releases and new brands. Over the past
17 years we’ve gained a unique insight into the industry and built fantastic relationships. It’s our job to keep up to date.

James and I taste over 4 000 wines a year and we keep our palates close to the ground, so to speak. Showcasing these new wines that were so different from the norm, we were able to educate the consumer about different styles, varieties and evidently, experiences. Seven years later there’s now a demand for off-the-beaten-track wines and it’s an honour to be a Young Gun.

And 2011 seemed like the right year for this endeavour?

Roland: There’s been a huge change in the South African wine industry over the past five to eight years. The shackles of boring varieties, conservative styles and formulaic winemaking seem to have been thrown off. This is probably due to winemaking stars such as Eben Sadie becoming highly successful and gaining international recognition. These new-wave producers often don’t own any vineyards or even their own cellar. Unlike wine estates who are constrained by vineyards and capital costs, they’re able to scour the Cape to find interesting vineyards and produce interesting wines. The South African wine revolution is firmly on track.