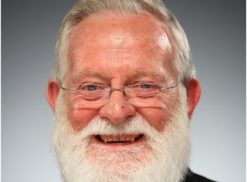 Benevolence is defined as a desire to do good and to be filled with kindness towards others. Synonyms for the word include charity, philanthropy, goodwill, kindness, altruism, humanity, compassion, social conscience and consideration.

All of these words could be applied to Dave Hughes, a man who has been in the news recently because of tribute being paid to him for the unstinting work he’s done for the South African wine industry over the years. It’s well known that Hughes was a prime mover behind the Nederburg Auction as well as the establishment of the Cape Wine Academy. He served on international judging panels when South Africa was a pariah nation – even going so far as to travel on his brother’s – “borrowed” – Irish passport! (But with those glasses and that beard is it any wonder he was able to clear immigration unhindered?!) And he served the industry locally in refining the processes at Veritas, being a proponent of Pinotage and assisting enthusiastically in the brandy industry too.

But he’s always been involved in other things too – organising the annual St Vincent’s Mass and blessing of the harvest and the Jan Kriel wine auction, an event held every year which raises much needed funds for the Jan Kriel school in Kuilsrivier which does a remarkable job as a centre of excellence for the education of learners with special needs.

“Over the years Dave has helped to raise millions of rands for the children of Jan Kriel,” said Dr Fanie Herholdt, director of the Jan Kriel Institute and chief fundraiser.

“He and the wine industry are unbelievable. I’ve never known an industry like it,” he said. “Some of the wine farmers who backed us from day one – Neil Ellis and Jan Boland Coetzee – still support Jan Kriel. All the wine farms give so generously and their assistance is amazing.”

Benevolence cuts both ways – and Herholdt was delighted that Jan Kriel had the opportunity to give back, taking a table at the first of two Dave Hughes Tribute dinners a few months ago. Furthermore, they bid successfully on a special lot donated by Ellis and Coetzee which involved large format special bottlings as well as a lunch for multiple guests and time, one-on-one, with the two wise men of South African wine.

A month later that same lot was added to the line-up of the Kriel auction and the lot was knocked down for R33 000. That money was again donated to the Hughes Tribute.

“As a NG Kerk dominee, I’ve been involved in a lot of events in my time,” said Herholdt – or Doc Fanie as he’s known around the school. “Yes, people are generous, donating a few sheep or a cow for the annual kerkbasaar, but I’ve never encountered the level of generosity which exists in the wine industry. Jan Kriel is just one entity – and I know, because after all the years of visiting the various farms many of them have become friends – that they donate a lot to charity.

“I want to say a massive and heartfelt thank you to all of those in the wine industry for doing what they do. And to Dave Hughes who for years was our auctioneer for his generosity of spirit, his kindness and goodwill.”

At a time when criticism, cyber-bullying and malicious comments are quick to be posted on social media, it’s fantastic that the wine industry as a whole, and Dave Hughes in particular, comes in for some praise.

Benevolence: a spirit of goodwill to others.

* Fiona McDonald is the regional chair for South Africa at the Decanter World Wine Awards, a Platter Guide taster, the current editor of CHEERS magazine for TOPS at SPAR and the former editor of Wine magazine.