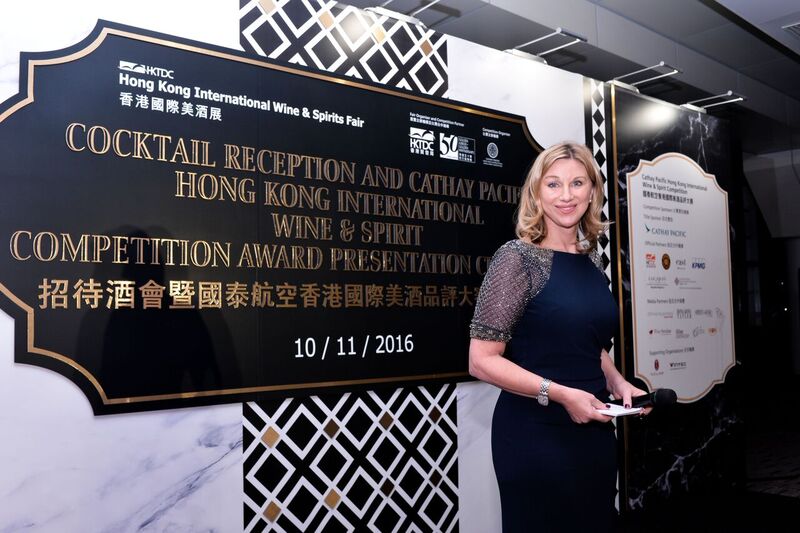 It was heels, boots and bow ties while New World wines almost made a clean sweep of the Best Grape Variety trophies at the 2016 Cathay Pacific Hong Kong International Wine & Spirit Competition (HKIWSC). By Wanda Augustyn

Hosted by founding directors of the HKIWSC Debra Meiburg, MW and Allen Gibbons, CEO of IWSC Group, the awards ceremony drew a full house of media, local wine and spirits importers and dignitaries all catching a

glimpse of this year’s hottest wines and spirits for Asia.

South Africa only scored one regional trophy with the Asara Vineyard Collection Chenin Blanc 2015. Two other SA beauties however were recognised with an Asian Food & Wine Pairing Trophy. The Mulderbosch Faithful Hound Red 2014 from Stellenbosch received the 2016 Best Wine with Smoked Pigeon with Oolong Tea Leaves and the Val du Charron Black Countess 2013 from Wellington received the Best Wine with Murg Makani (Butter Chicken).
The competition attracted wine entries from 31 countries with spirits from 27 countries. Australia led with the biggest trophy haul of 10 followed by New Zealand with six.

It is clear that spirits is a growing trend in Asia with gin attracting 41% more entries than the previous year. The overall competition had an 11% rise in entry numbers, as well as several new country entrants: Brazil, England, Israel, Mexico,

aking their debut. Spirit wise Barbados, Georgia, Hong Kong, New Zealand, the Philippines and the Republic of Ireland exhibited their goods for the first time ever.

“Trophies and medals offer major credibility in this market, and we are so pleased to see a fresh batch of winners this year,” Meiburg said. “This competition continues to attract the a
ttention of the international wine community and local importers. More  and more, people are recognising the intricacies and differences in the taste and consumption preferences of the Asian community from other major markets where wine competitions are traditionally based.”