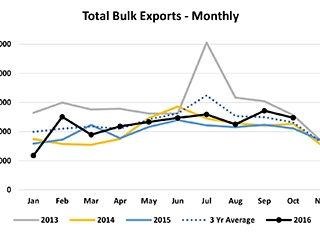 The last year’s wine exports were very stable and we didn’t see much growth in the volume of exports on either bulk or packaged product. Contrary to this, the local market saw four exceptionally good years with the local market growing in 2013 by 4%, 2014 – 8%, 2015 – 9% and for the last 12 months from Sept 2015-Aug 2016, still growing at 8% in volume. This gives us a total of approximately 80 000 to 100 000 million litres more wine sold in the local market per year than four years ago.

On the packaged side of the market the volumes were down, but it was still very positive to see that the value went up by 18.8% per litre. However, on the bulk side there was only a 2% growth in value per litre.

There was thus exceptional volume growth in the bulk market at a slightly higher price, whereas in the packaged market the volumes were down but with a significant increase in value.