Grape berries harbour a complex microbial community comprising yeasts, bacteria and filamentous fungi that inhabit the skin surface and endosphere of the berry. The filamentous fungi are not known to contribute to wine quality and therefore receive less attention from the research community. In contrast, yeasts and bacteria play a crucial role and have a direct influence on wine quality(1). The microbial population is spatially distributed over the grape berries and grape bunches and display temporal fluctuations over the course of the grape berry development(2). Indeed, several studies have shown that after veraíson the yeast community associated with undamaged/healthy berries closely resembles that of plant leaves, which is dominated by basidiomycetous yeast species of the genera Cryptococcus, Rhodotorula, Sporobolomyces and Rhodosporidium, as well as the ascomycetous yeast-like fungus, Aureobasidium pullulans. At full ripeness, the fermentative yeasts of the genera Candida, Hanseniaspora, Lachancea, Torulaspora, Pichia and Saccharomyces (albeit at a relatively lower level) become more abundant(2, 3). Yeasts are the main drivers of the primary fermentation and are the main producers of the organic acids, esters and higher alcohols which are the main compounds that form the fermentation bouquet.

Several studies have shown that the microbial community structure associated with grape berries responds to biotic and abiotic factors including pesticides. A concerted shift from high chemical inputs on vineyards in the past two decades has stimulated interest in understanding the effect of farming practices on the vineyard ecosystem, most importantly the microbial community structure. Studies comparing organic farming with integrated pest management, conventional farming generally report higher microbial diversity on organic farms(4, 5). However, only a few of such studies have been performed and the research findings are not always consistent across the different studies due to differences in sampling strategies.

Our study evaluated the fungal diversity in three adjacent vineyards situated in the Polkadraai area in Stellenbosch. The aim was to assess the influence of farming practices on the grape mycobiota on grape berry surfaces and in grape must. We employed culture-dependent and culture-independent techniques for an in-depth analysis of the entire fungal community.

TABLE 1. Spray programme for the biodynamic, conventional and integrated vineyard from leaf-fall until full bloom. 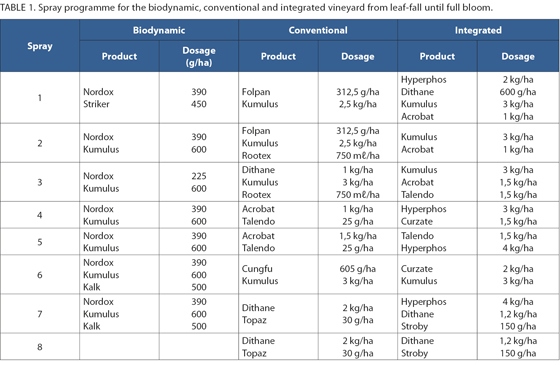 Wallerstein Laboratory (WL) Nutrient agar supplemented with appropriate antibiotics was used to isolate and enumerate yeast species by direct plating of serially diluted grape must samples. Molecular identification of the yeast isolates involved extracting the genomic DNA (gDNA) from isolates, PCR amplification of the internal transcribed spacer (ITS1-5.8S-ITS2 rRNA) region, digesting the PCR amplicons with restriction enzymes (CfoI, HaeIII and HinfI) in order to group isolates based on their respective banding patterns and sequencing of the representative PCR amplicons from each group.

For in-depth metagenomics analysis, microbial cells were collected from freshly crushed grape must by centrifugation and community genomic DNA was extracted by mechanical lysis in conjunction with an SDS-based lysis buffer. The ITS1-5.8S rRNA-ITS2 genes were amplified and sequenced using the Illumina MiSeq High throughput sequencing platform. The sequences obtained were processed using the Illumina pipeline on the MetaGenomics Rapid Annotation using Subsystems Technology server to assess quality and compare the sequences with those present in different sequence databases in order to identify the fungi they represented.

Analysis of the yeast community present on the surfaces of sound ripe grapes that had seemingly not been in contact with over-ripe or damaged grapes showed that oxidative basidiomycetous yeasts, as well as the yeast-like fungus Aureobasidium pullulans are dominant on the berry surface. The grapes from the biodynamic vineyard were also found to carry unique yeasts such as Meira geulakonigii (known to have antagonistic activities against mites), Pseudozyma fusiformata (which produces anti-fungal glycolipids), as well as Exophiala sp. and Ustilago sp. This suggests that farming systems that do not regularly apply chemical pesticides promote the development of diverse microbial communities that may include natural pests of potential grapevine pathogens(6). This suggests to some extent that the reduction in pesticide application creates conducive conditions that support the establishment of balanced ecosystems. 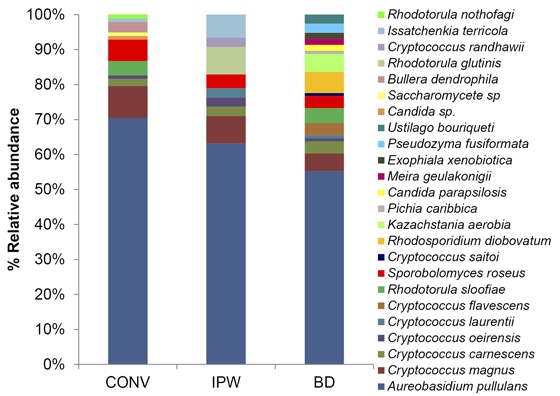 Analysis of the yeast diversity in grape must revealed a community mainly comprising oxidative and fermentative ascomycetous yeasts. These included common yeasts such as Metschnikowia pulcherrima, Hanseniaspora uvarum, Lachancea thermotolerans, Starmerella bacillaris, Torulaspora delbrueckii, as well as Saccharomyces cerevisiae. In addition, uncommon yeasts such as Kazachstania aerobia were detected in the must from the biodynamic vineyard(7). Overall, the yeast community in the must varied from year to year, however, A. pullulans, H. uvarum, M. pulcherrima and Issatchenkia terricola were frequently encountered (Figure 2). Our data showed that although there are common yeasts present in the three vineyards, only H. uvarum and A. pullulans were isolated in all three of them in consecutive years, while other species were encountered fortuitously in years and samples where they were present in higher concentrations. 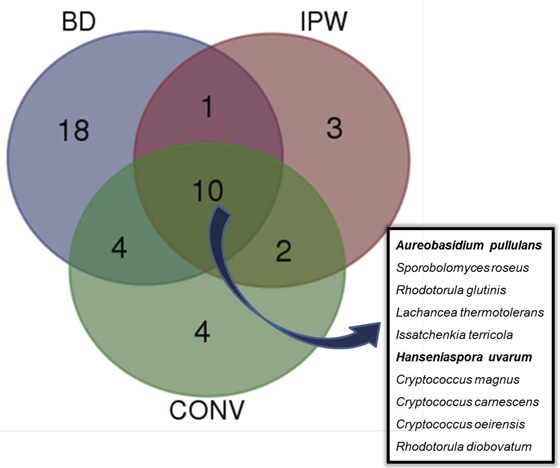 FIGURE 2. A Venn diagram showing the distribution of yeasts associated with Cabernet Sauvignon grapes and grape must from the biodynamic (BD), integrated (IPW) and conventional (CONV) vineyard.

An in-depth analysis of the entire fungal community using high-throughput sequencing of the ITS1-5.8S rRNA-ITS2 gene pool derived directly from the grape must without prior cultivation of the microorganisms, revealed more fungal diversity in the three vineyards including yeasts and filamentous fungi (Figure 3). Similar to the culture-based method, the data showed that the whole fungal community structure associated with grapes and grape must responded to farming practices since there were obvious differences in the diversity and abundances of the fungal species in the three vineyards. 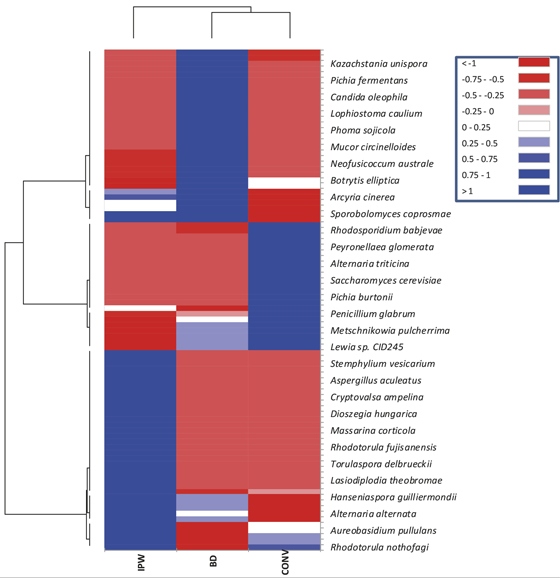 FIGURE 3. A heat map showing the presence and abundance of yeasts and filamentous fungi in the grape must derived from the integrated (IPW), biodynamic (BD) and conventional (CONV) vineyard as detected through direct sequencing of the ITS1-5.8S rRNA-ITS2 genes.

Overall, our data showed that the three vineyards that employ different agronomic practices harboured different fungal communities. Similar to other studies performed on organic and conventional vineyards, the grapes derived from the vineyard which applies less chemical pesticides (i.e. the biodynamic vineyard) was found to have more fungal diversity(4, 8). Furthermore, our study also showed that there was contribution of the vineyard fauna and flora to the grape fungal diversity. For instance, our metagenomic data revealed fungi such as Aschochyta spp. which are known to be associated with turf grasses, wheat, barley, rye and oats; plants commonly used as cover crops in the vineyard. A comparison of the fungal diversity in the three South African vineyards to those derived from different vineyards and different grape cultivars across California in the United States of America revealed very low similarity(9). This suggests that South African winemakers should harness the natural biodiversity and apply methods that would promote the persistence of indigenous yeasts in fermentation in order to drive unique chemical signatures that would distinguish wines on the bases of their origin.

Our study showed that South African vineyards harbour unique diverse fungal communities which are significantly distinct from vineyards on other continents. This diversity is strongly affected by farming practices including pesticide applications, as well as the types of cover crops used. A better understanding of these influences may help winemakers employ strategies that will harness the natural biodiversity and most importantly promote the establishment of desirable microbiota.

This study was supported by Winetech (grant IWBT-MG-11/01) and the National Research Foundation – Technology and Human Resources for Industry Programme (grant TP2011060600013).

The opinions expressed and conclusions arrived at, are those of the authors and are not necessarily to be attributed to the funding agencies.