Ever heard the expression, “it’s so crazy, it might just work”? A group of eccentric Italian viticulturists, or ‘master pruners’, have introduced an unconventional pruning technique that could possibly breathe new life into old vines.

During a visit to the Fieragricola Trade Show in Verona, Italy, last year, Vinpro Consultation Services manager Conrad Schutte witnessed a spectacular pruning demonstration at the Simonit & Sirch stand. A flamboyant “grapevine surgeon” was captivating the crowd with typical Italian gusto and a mini chainsaw, making precise, vertical incisions on the trunk of an old, disease-riddled grapevine.

The idea of taking a chainsaw to your vineyard sounds insane, but not according to the Preparatori d’Uva, a group of master pruners from Simonit & Sirch, who train wineries all over the world on correct and cost-effective pruning and viticultural techniques.

They were showcasing Dendrochirurgia, a ‘surgical’ technique first experimented with in France and then in Italy, which removes the decay that forms beneath wounds caused by incorrect pruning, through which fungi penetrate and attack the wood and compromise the integrity of the sap system of the vine.

Grapevine surgery has been widely experimented with – on approximately 10 000 grapevines over six years. A huge number of Sauvignon Blanc, Chardonnay, Cabernet Sauvignon, Cabernet Franc and Pinot Noir vines have been operated on in six wine-growing regions spread across Italy and France.

Using small chainsaws, these surgeons open the trunk and surgically remove the parts that have been attacked by Esca disease, leaving only the sides to keep the sap flowing, possibly saving the vine, which can immediately go back to producing fruit.

The technique aims to save grapevines from being uprooted by removing visible Esca, one of the most serious and widespread vine diseases in the world.

After the trade show, Conrad took a three-hour car journey to Simonit & Sirch’s headquarters in Friuli to learn more about this fascinating technique.

It turns out grapevine surgery is popular among premium wine producers in Italy (those who charge 50 Euros – or R950 – per bottle) as a last resort to save ageing top-performers that have contracted disease. And, as Conrad puts it, to “squeeze the last bit of liquid gold from the vine.”

A producer will typically approach Simonit & Sirch’s surgeons after noticing a drop in the grapevine’s production as a result of Esca. “By this time, the vine has come to the end of its lifecycle, but instead of uprooting the vine, the estate or farm owner will commission Simonit & Sirch to do surgery on the ageing grapevine and extend its lifespan by another five years or so,” says Conrad.

Only struggling and diseased vines within a block are eligible for the surgery. A surgeon will spend no more than 15 minutes on a vine before moving on to the next. “After 15 minutes it doesn’t make financial sense anymore.”

Although this unconventional pruning technique has not been scientifically proven, Conrad says the principles make sense in theory. “Parallel incisions are made along the vascular tissue of the grapevine. The trick is to make the cut all the way down below the graft union of the vine – the junction of the scion and the rootstock.”

Simonit & Sirch speculate this pruning technique will result in better sap flow without any desiccation. “The results are amazing. I remember witnessing these hollowed out grapevines bearing thick-set shoot tips, which is a clear sign of the vine’s vigour and growing power.” Conrad says even vines that received grapevine surgery more than five years ago showed amazing vigour, and were almost restored back to their initial production levels. “It definitely lengthened the lifespan of these vines.”

“With grapevine surgery, you have nothing to lose.” Producers can sleep easy knowing the vineyards are safe and disease-free. But even more, the quality of their wines and their wineries’ economic resources are safeguarded as well.

The results are astonishing. Ninety percent of vines that were treated returned to full productivity, according to Simonit & Sirch vineyard consultant Livio Tognan. “With grapevine surgery, we’re able to intervene even during the chronic phase of the sickness and manage to restore the plant to health,” he says. 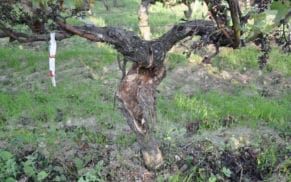 The case for old vines

In South Africa, grapevine uprooting is widespread, especially in older vines. The latest SAWIS figures show a total of 3 858 ha of vines were uprooted in 2018, but only 1 506 new vines were planted.

According to André Morgenthal, communications manager at the Old Vine Project, small growers in South Africa with precious old vines often experience the same problems faced by growers in countries like Chile, where the cost of running an old vineyard relative to the eventual yield and what the growers receive for the fruit they produce is simply not economically viable.

One hectare of old vines costs about R45 000 to yield an average of three tonnes. To be financially viable, the grower therefore needs about R15 000 per tonne, but all too often they’re being paid in the region of R4 000 per tonne.

This causes many producers to uproot old vines – all the more painful when they are good ones – because they can’t afford to maintain them.

But as more South African growers are seeing the benefits of old vines – not only for their heritage, but also for the magical wines they produce – there’s a bigger drive towards protecting and preserving the right blocks rather than grubbing everything up every few decades in pursuit of high yields.

More than that, producers are realising that these old vines can remain financially viable too.

Conrad believes that although viticultural practices and growing conditions in South Africa differ from that of Italy, there’s plenty of scope for producers looking to save their old vines from disease to experiment with this technique.

“It’s definitely something we’re looking into, and we encourage producers to take us up on this, especially those with cherished, older vines compromised by disease.”

“It’s not rocket science, and we possibly have the necessary know-how to experiment with a technique like this. It could be a fruitful opportunity to exchange information with our Italian counterparts, and learn from them. Together, we might be able to save precious old vines.”

Get in touch with Vinpro Consultation Services to find out more. Contact Conrad Schutte on 082 804 0422 or email conrad@vinpro.co.za