Grapevine versus pathogen – an ongoing battle 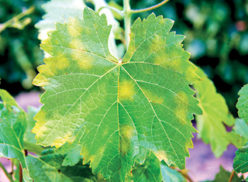 If you hear terms like “defensive structures”, the “arms race”, “decoys”, “triggers”, “signals” and “reinforcements”, you might think that a military battle strategy is under discussion. These battle-related terms are, however, also characteristic of a largely unseen battle that occurs on a daily basis in the plants that inhabit our planet. Plant colonisation by other living organisms sometimes leads to disease, but only if a virulent pathogen on a particular plant species can successfully infect, proliferate and spread during a compatible pathogen-host interaction. Many attempted infections fail, either because of the low fitness/virulence of the particular pathogenic strain, the environmental conditions during the infection, the defence systems and resistance level of the plant being infected, or the presence of competing organisms/agents that might negatively influence the infection. Grapevine cultivars are notoriously susceptible to pests and diseases and understanding why is imperative to “fix” the problem.

Plants and pathogens are engaged in an evolutionary “arms race” where pathogens evolve to overcome the resistance mechanisms of their hosts and the plants adapt to overcome the infection strategies of their pathogens. Commercial grapevine cultivars, however, is at the losing end of this race, given their significant susceptibility against a number of economically important pathogens. It seems that human intervention is the root cause of this susceptible state of the grapevine cultivars grown in world-wide viticulture. That might sound like a “wild” statement, but in actual fact is exactly what whole genome comparisons between wild vines and cultivated varieties showed.1 Several surprising facts came to light, which only became possible after the grapevine’s genetic code (genome) became available in 2007.2 The big surprise was that very little genetic differences exist amongst the many cultivars and varieties of Vitis vinifera, the European grape. In fact many of the well-known cultivars that dominate the world-wide wine industries were in parent-child, or sibling relationships when looking at their genetic relatedness.1

This type of analysis showed that the grape underwent very little reshuffling of its genetic material since domestication of the species, since humans selected for certain traits that were considered important for grape and wine quality. Grapevines are propagated for production through vegetative propagation through cuttings, another factor that lead to the situation that new genetic traits were not introduced into the genepools of the cultivated varieties. The whole genome analysis also showed that wild vines, in contrast to the cultivated varieties, maintained significant diversity in their genetic material, since their genomes were forged through natural selection where “survival of the fittest” would dictate the success of individuals. Not surprising then that these vines typically show strong resistances against pathogens, as well as stressful environmental factors that are prevalent in their native areas, but they lack the traits selected for by humans to support quality grape and wine production (Figure 1). 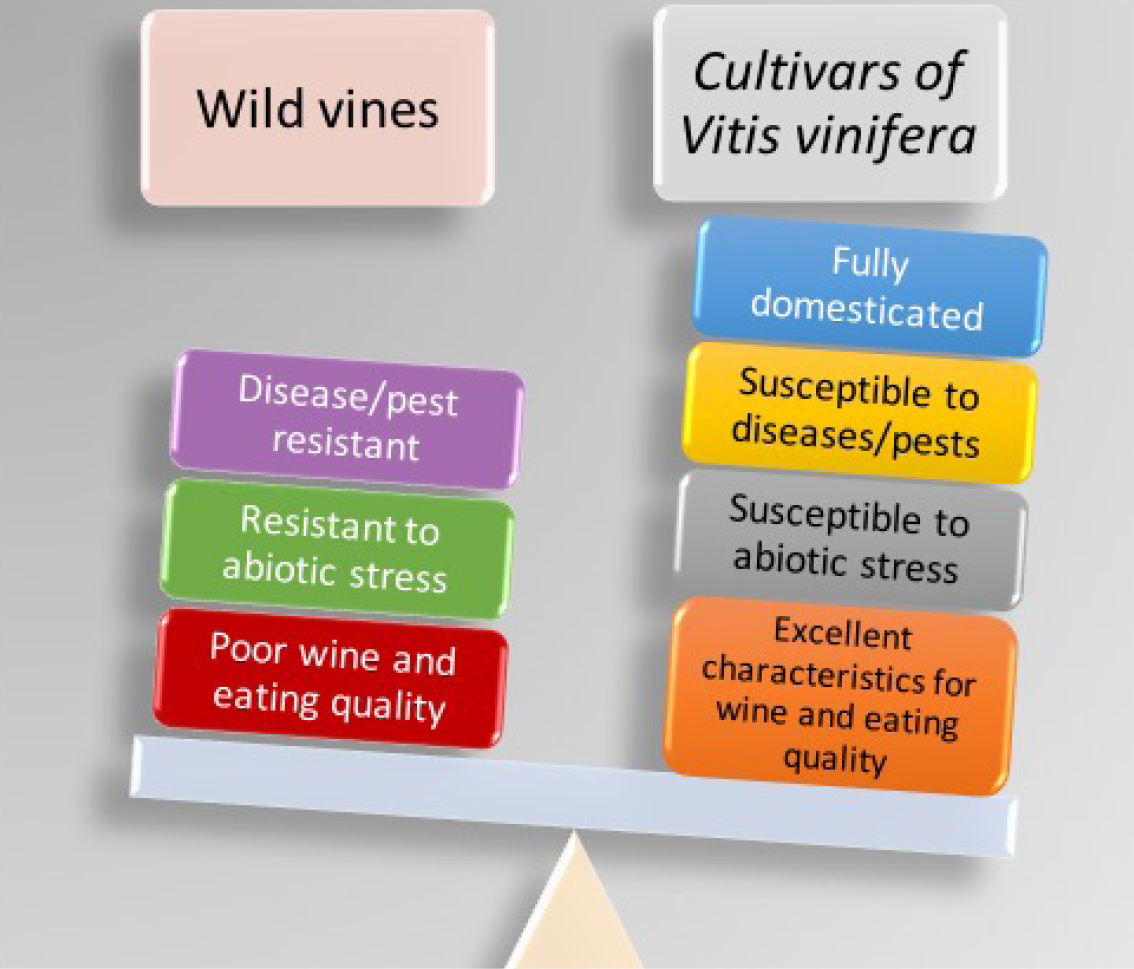 FIGURE 1. The differences in terms of characteristic traits between the cultivars of Vitis vinifera, subjected to domestication and human selection, versus wild vines that underwent natural selection.

The commercial Vitis vinifera cultivars therefore lack many of the resistance mechanisms that are present in the wild vines and efforts are underway to breed new cultivars with these traits. It’s not a quick and easy fix though and the more we understand of both the resistance and susceptibility mechanisms, the more directed our strategies could be.

What do we know of plant defence?

Plants have surprisingly sophisticated and multi-layered defence mechanisms against pathogens. The best defence is always to keep the pathogen out, leading to defensive structures and molecules being deployed on the surface of plant organs, such as roots, shoots, leaves and fruits. Any infecting pathogen would need to breach these defensive structures that are the so-called pre-formed defence mechanisms, before proceeding to attack/penetrate/degrade the plant cell wall to gain access to the internal plant body. This first layer of defence is then followed with an active defensive effort where the plant cells will fight the pathogen at the infection site through a range of activities that might include reinforcing cell walls, forming hydrolytic and toxic substances to try and kill the invader, or even the infected plant cell(s) in an effort to isolate the pathogen.

The killing of its own cells is called programmed cell death (PCD) in plants and works particularly well against biotrophs that require living tissue to proliferate, but less well against necrotrophs that actually kill and consume plant tissues as part of their infection strategies. Grapevine is attacked by both biotrophic and necrotrophic fungi, with very specific characteristics that define the different diseases that they cause (Table 1). In addition to the pre-formed and activated defence strategies at the site of infection, warning signals are also send to other parts of the plant through hormone actions or volatiles to activate full defensive strategies throughout the whole plant body to anticipate further attack. 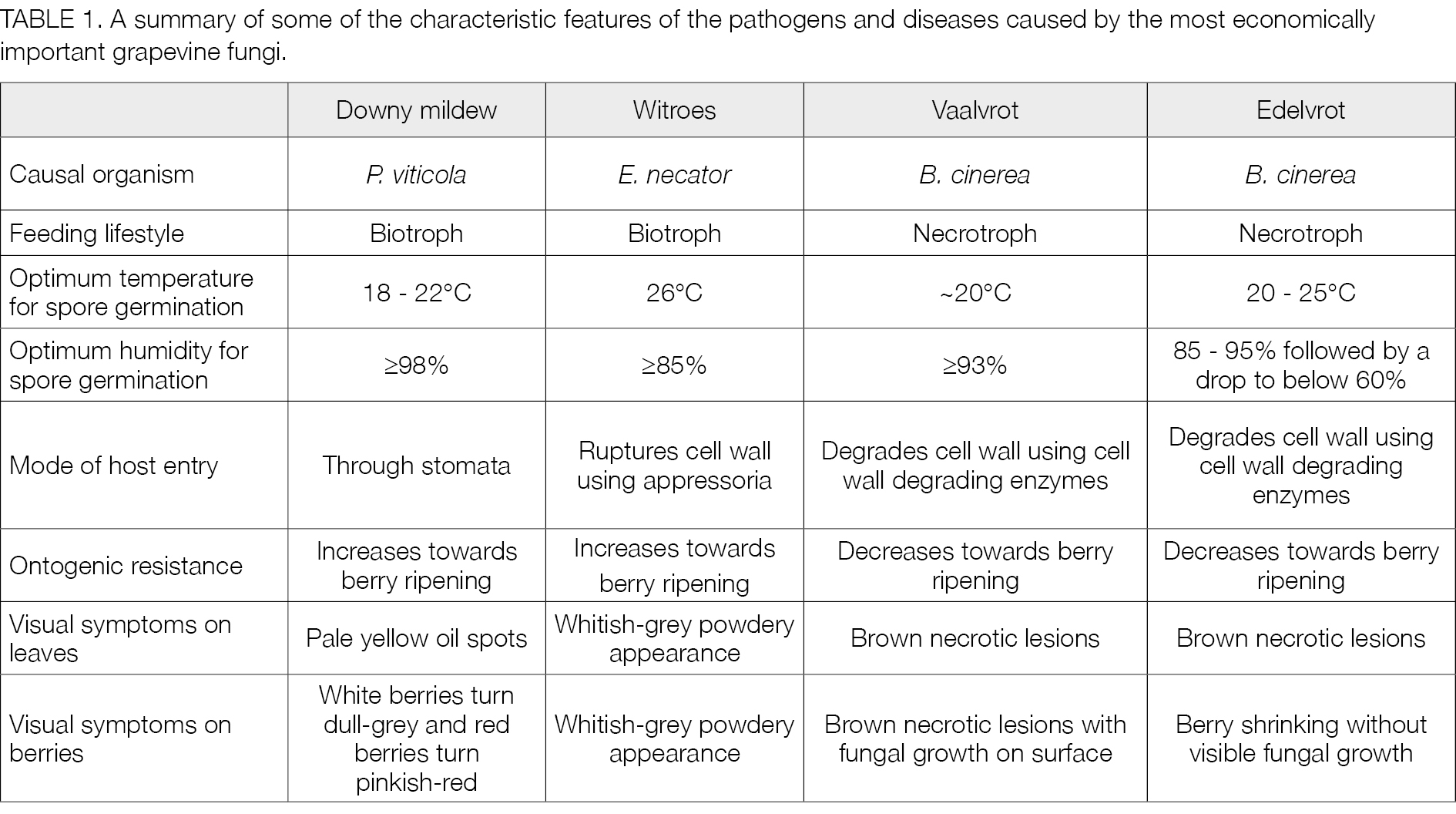 There are a multitude of approaches that can be implemented to understand grapevine disease susceptibility and all of them have value and make important contributions. Studying the pathogens, their life cycles, their natural enemies and how they adapt to chemicals used for their control is as important as finding the genetic basis of resistance mechanisms through genetic mapping and breeding programmes. Studies into known defence genes, in many cases first found and characterised in model plant species and then subsequently studied in grapevine, is important as well, specifically to know the possible roles they could play in resistance against infecting pathogens. This approach is called functional characterisation, or in other words, finding the function of a defence gene/protein. To explain the value of this approach, the functional analysis of a grapevine defensin gene will be highlighted.

Vvi-AMP1, the first defensin isolated from grapevine is a potent antifungal peptide

Plant defensins form part of a superfamily of anti-microbial peptides that predate the evolutionary divergence of animals and plants, due to their representation among vertebrates, invertebrates, mammals and plants. Defensins are small peptides that typically occur on the surface layers of plant as protective pre-formed defence mechanisms. They typically bind specific fungal membrane receptors, the sphingolipids, to inhibit or even kill the fungi by disrupting their membranes. Furthermore, these defensin peptides are generally the products of single genes, allowing the plant to deliver these molecules relatively rapidly and with minimal energetic expense to the plant.

The first antimicrobial peptide isolated from grapevine is known as Vvi-AMP1 (Vitis vinifera antimicrobial peptide 1).3 Several more genes for these defensin peptides have since been uncovered in the grapevine genome sequence and some have been functionally characterised; all display activity against fungal pathogens. The Vvi-AMP1 peptide was purified and tested against several fungal pathogens that can be cultured in the laboratory and the peptides could inhibit the growth of a wide range of grapevine pathogens.

Interestingly, the peptide was found to be only produced in certain of the grapevine organs and not throughout the growth cycle. This pattern of peptide production was, however, altered in an experiment, generating grapevines that always produce the peptides at high levels and in all organs. When these plants were infected with the powdery mildew pathogen (a biotrophic pathogen), the plants displayed strong resistance against the pathogen, whereas the control group that did not have the benefit of the increased levels of the peptide was susceptible. The plants with increased levels of Vvi-AMP1 peptides lines showed elevated levels of PCD associated resistance (Figure 2),4 comparable to that of Muscadinia rotundifolia, a grapevine species known for strong resistance to Erysiphe necator infection. The results showed that the pathogen tried to form penetration structures, but clearly encountered “problems” on the surface of the leaves being infected, leading to many penetration attempts that failed (Figure 3);4 moreover, the amount of fungal spore that were recovered from the defensin-enriched plant surfaces were threefold less than the control group.4 Following the infections with microscopy and staining of the plant cells, the presence of PCD was very clearly visible (Figure 2),4 confirming that the normally susceptible grapevine cultivar managed to activate this defence response that is normally not part of the susceptible Vitis vinifera cultivars’ response against this pathogen.

FIGURE 2. Grapevine plants in an experiment where defensin peptide production was switched on (A) versus the controls (B) after being challenged with the powdery mildew pathogen. A strong programmed cell death (PCD) reaction is seen in (A) that led to a strong defensive reaction against the pathogen. Staining of the infection spots showed the infection structures of the pathogen, as well as a the PCD in the adjacent cells [ap – appressorium; c – conidium].

FIGURE 3. SEM micrographs of germination stages and attachment of E. necator conidia on the grapevine leaf surfaces at 48 hours post inoculation with dry conidia at 500 magnification. The control grapevine (A) was successfully infected by the pathogen with infection structures, as well as primary and secondary hyphae visible, whereas the plants where the Vvi-AMP1 peptide production was activated (B), the pathogens struggled to penetrate the leaves, with multiple penetration structures formed and some abnormalities visible in these structures.

The Vitis vinifera cultivars display no real resistance against pests and pathogens, but rather degrees of susceptibility, a situation that is linked to the extensive human selection for favourable berry traits for fresh consumption and winemaking (in preference to abiotic and biotic stress resistance) and the fact that the grapevine is vegetatively propagated, essentially eliminating natural selection against prevailing pest and pathogens. Resistances to these pests and pathogens are available in wild vines and hybrids and is now increasingly used in breeding programmes, also using markers assisted strategies. The more we know and understand of the basis of susceptibility and/or resistance, the more targeted and efficient control strategies might become. It is well known that pathogens keep adapting to control strategies and in relatively short periods, new resistant races/strains can occur that overcome either the genetic basis of the resistance, or adapt to the chemically-triggered responses to break down the resistance(s). Here we described progress made to functionally characterise defence genes in grapevine, and specifically the insights gained from following the impact the Vvi-AMP1 defensin peptide had to protect against powdery mildew infection by blocking pathogen penetration of the cell walls, as well as activating a strong and effective resistance mechanism.

The research that are summarised here formed part of the MSc theses of M.M. Tredoux and K. du Plessis and the PhD thesis of Dr. A. de Beer. Table 1 was compiled by Dr. M. Moyo. The research was financially supported by Winetech, THRIP and the National Research Foundation of South Africa.