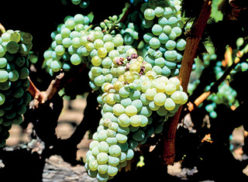 Thiols in SA’s top performing wines and the effect of sensory interactions.

Interaction with other wine components

The Top 10 Sauvignon Blanc competition, presented by the Sauvignon Blanc Interest Group of South Africa and sponsored by First National Bank, is the country’s foremost platform for producers of this cultivar to showcase and benchmark their wines. The 10 selected wines of the 2015 competition were subjected to various chemical analyses, including volatile thiol and methoxypyrazine determination, while the sensory profile of each wine was determined using projective mapping. Results from the top 10 winners of 2015 showed great diversity in wine styles: from fresh and fruity to green and even wooded wines and volatile thiol concentration in these wines ranged from <10 ng/ℓ to 547 ng/ℓ for 3MHA, while 3MH concentrations ranged from 328 ng/ℓ to 1 638 ng/ℓ. These values are much lower than the maximum values determined by VinLab for 2015 which ranged from <10 ng/ℓ to 2 440 ng/ℓ for 3MHA and 29 ng/ℓ to 4 140 ng/ℓ for 3MH. The diversity of wine styles chosen as competition winners, shows the great complexity of quality Sauvignon blanc wines produced in South Africa. The contribution of other aroma compounds in these wines should also not be underestimated as compounds, such as esters, and monoterpenes can also significantly influence the aromatic composition of the wine delivering great complexity and desirable profiles. Other than that, the sensory results of the selected wines did not always correspond to the chemical profile highlighting the importance of other aroma compounds impacting the wines, as well as interactions occurring between volatile compounds.

Analysis of the 2016 top 10 Sauvignon blanc wines showed very interesting results for 4MMP. The values ranged from 0 to 122 ng/ℓ, which are huge amounts of this thiol especially considering in general that this thiol is mostly absent in wines from other countries. Even to such an extent that some researchers have stopped analysing for it. From the selection of top 10 wines, the wines containing copious amounts of 4MMP had a distinct blackcurrant character and it added a different dimension to the wines’ aromatic characteristics. It would seem as if the presence of 4MMP in South African wines could give the needed edge to distinguish our wines in the international market.

The techniques discussed in Part 3 of this series can be used to try tailor-make a wine to fit the aroma profile desired, however, as always it is not an easy task. Not only is there no guarantee for success, there is the added hurdle of wine complexity where sensory interactions can play a bigger role than anticipated. Sauvignon blanc needs to be considered holistically by the way the compounds work together to create wine aroma. The presence of other molecules in the wine, whether it be aromatic or non-aromatic, can influence the perception of the volatile thiols. This is a complex relationship within the wine medium and there is no real way to control these type of interactions as the effects of many have not been investigated. Some relationships have been studied. The interaction of 3MH with oxidation related compounds (especially methional, reminiscent of cooked potato) showed a strong suppressive effect with methional reducing the intensity of the fruity aroma significantly. Conversely, acetaldehyde actually enhanced the perception of fruitiness brought by 3MH as long as concentrations were moderate. As soon as elevated concentrations of acetaldehyde were present, the interaction changed from being enhancing to suppressing. A mutual suppressive effect was also seen between IBMP and 3MH at specific concentrations. The contribution of the volatile thiols to the green aroma in wine has also been observed in various studies. In a pressing study, the decrease in volatile thiol concentration in higher press fractions also led to a decrease in the “fresh green capsicum” aroma even though there was no change in the IBMP concentration.

Another mistake would be to assume that all Sauvignon blanc grapes behave the same. For instance, harvesting studies using different sites showed some agreement in results, however, occasionally the treatment did not lead to enhanced thiols. This should be kept in consideration and conducting small scale studies before opting for larger volumes could save time and money.

It is also important to remember that great wine starts in the vineyard. If the potential is not there to start with, the chances of gaining volatile thiols to levels of significance are slim. Therefore, it is wise to keep track of high thiol producing blocks between vintages and primarily use those grapes for production of high thiol wines.

Some of the information is hard to comprehend as it will go against what has been considered for years to be good winemaking practice (especially for Sauvignon blanc). South African Sauvignon blanc is considered to be the half-way house between New Zealand and Loire and innovative winemakers should push the envelope in order to stand out.