This image was taken from Hamilton Russell Vineyards on 11 January 2019 around 14:00. By 16:30 that afternoon, the fire destroyed approximately 10 ha of vineyards on the farm.

The devastating fire that’s been raging in the Hemel-en-Aarde Valley outside Hermanus since Wednesday, 9 January had destroyed approximately 10 hectares of vineyards and caused extensive damage at Hamilton Russell Vineyards.

The fire that started in Karweiderskraal Valley on 9 January, powered by strong westerly winds, reached the Hemel-en-Aarde Valley on Friday, 11 January 2019. “Attempts are currently underway to try and limit any further damage to the vineyards,” Johan Montgomerie, farm manager at Hamilton Russel Vineyards told landbou.com.

An eyewitness on the scene, Conrad Schutte, assistant manager at Vinpro’s consultation services, was in the Hemel-en-Aarde Valley on Friday when the fire spread. He told WineLand Media that there “was a lot of panic and confusion.” Montgomerie informed Schutte that Hamilton Russell has lost approximately 2.5 ha of Sauvignon blanc vineyards at its Southern Right site. “Around 3-4 ha Pinot Noir suffered heat damage and one hectare of a young vineyard block also suffered extensive damage,” Schutte said.

He also said that the staff at Hamilton Russell have been working around the clock to restore the damage caused by the fire. “Staff have been hard at work fixing all irrigation systems and dumping the grapes that suffered smoke damage in the hope that the vineyards will recover in time.”

Montgomerie said: “We are now harvesting the burnt vineyards of any grapes to prevent rot and thus the spread of fungi and bacteria.”

He says that the crop looked good after the drought this year and he remains optimistic about the current harvest.

The extent of smoke damage to nearby vineyards is still unclear.

“The community has been incredible in their support. Food, clothes and drinks were brought to us, and tractors with pumps helped reduce the damage. The fire was so hot, it melted a 160 mm pVC pipe and a lot of irrigation water leaked from one of our dams,” says Montgomerie. He says thanks to the rain on Friday, it would seem that the fire has been brought under control. 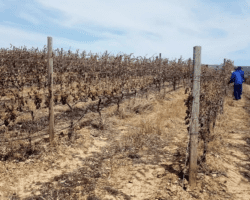 Although there was considerable production and infrastructure loss, it is still too early to determine the financial scope of the damage (photo courtesy of landbou.com)

About 1 hectare of olives on the farm was also destroyed by the fire (photo courtesy of landbou.com) 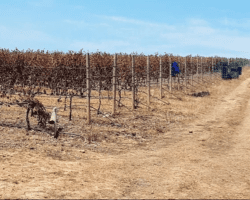 To ensure that diseases are not transmitted by rotting, burnt grapes to healthy grapes, the burnt bunches of the vineyards are stripped. (Photo courtesy of landbou.com) 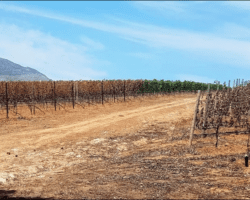 To ensure that diseases are not transmitted by rotting, burnt grapes to healthy grapes, the roasted bunches of the vineyards are stripped. (Photo courtesy of landbou.com)