South African producers and winemakers are a resilient bunch. Despite crippling droughts, tough economic times, as well as the COVID-19 pandemic threatening to halt production, winemakers and producers have stood fast and managed to produce what promises to be one of the most outstanding harvests on record.

South Africa’s 2020 harvest has been described as “exceptional”.

According to a report released in April by industry bodies Vinpro, SAWIS (SA Wine Industry Information & Systems) and WoSA (Wines of South Africa), the South African wine industry, despite the COVID-19 lockdown, expects an “exceptional 2020 vintage.”

However, a looming fear exists among producers as many face financial meltdown and a severe knock in sales due to government’s strict prohibition of alcoholic products during the lockdown period. But could the 2020 harvest be this dark cloud’s silver lining?

“It’s ironic that the COVID-19 crisis should coincide with what promises to be one of our best vintages in years,” says Carolyn Martin, Creation Wines co-owner. “Just think of all the costs that could have been incurred had production being halted. No harvest. No sales for the year ahead. It could have been catastrophic.”

While SAWIS estimates that 2020’s wine crop will only be somewhat larger than last year (still smaller than the five-year average of 1.36 million tonnes), manager of Vinpro’s viticultural consultation services, Conrad Schutte, says it’s attributed to smaller berry sizes, the prevalence of botrytis rot and ongoing drought in certain areas. “Smaller berries also have greater flavour and colour concentrations, which will be reflected in exceptional quality in the wines.” 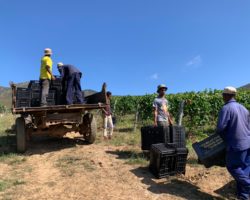 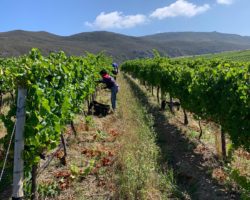 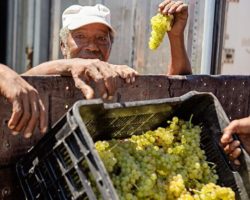 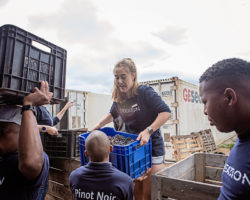 What producers had to say?

“Véraison (onset of ripening) was early, quick and in most cases, it seemed that white and red cultivars would ripen together.” Bosman’s harvest came later than usual but the duration was shorter. “We had to crush more per week than ever before.”

She adds: “In our growing areas [Hemel-en-Aarde Valley and Wellington], we experienced a very healthy, and, to an extent, a disease-free crop”.

Ivy du Toit, owner and winemaker at Jason’s Hill in the Breedekloof Valley, says the red cultivars that really stood out. “It wasn’t so much about the yield, but that it was healthy and balanced.”

La Motte’s crop is roughly 25% bigger than in 2019. Cellar master Edmund Terblanche attributes this partly to younger vineyards bearing fruit, “But mainly as a result of higher tonnage per hectare, especially with our Merlot and Sauvignon Blanc.”

He believes the vineyards responded well to timely irrigation and supplemental fertilisation this year that was needed after the drought. “Overall, it’s a good year. We had good volume, and there were no negative conditions that could impair quality.” He says he quality has been exceptional despite the high yield.

For winemaker Ben Snyman, the man behind Overhex International’s popular Survivor brand, the 2020 season was “a healthy one”. He says berries were compacted with flavours, white wines are full and fruit-driven where the red wines showed a deep ruby colour, depth, long length and good tannin structure.

“Canopies grew vigorous during the 2020 growing phase and good canopy management was required. That, and the crop size was a good indicator that the vineyards thrived this year.”

But not everyone had a bumper harvest. Phillip Retief, managing director of Van Loveren Family Wines, says the Robertson region’s white wine harvest was significantly less (roughly 15% down) than in previous years.

In other regions, producers are still reeling from the drought. Alicia Rechner, winemaker at Backsberg Wine Estate says the drought has had a severe impact on the estate with significantly smaller harvests since 2015.

She adds that Backsberg’s 2020 harvest was still plentiful. “This year was the first time that our tonnages have returned back to normal. We experienced an incredible harvest this year, and the standout varietal was our Chardonnay.” Our decent rainfall last year, with some additional irrigation, delivered good results.

Pierre Blake, producer and owner of Boterberg, a wine grape farm in Philadelphia, says they had good, even budding, with very few signs of leaf roll in the older vineyards. “Berries were smaller which should have a big influence on the quality of our Shiraz and Cabernet Sauvignon.”

Wynand Lategan, winemaker at Lanzerac says the estate’s 2020 harvest showed good acidity in the grapes. “The volumes showed good growth compared to the previous drought years. The quality of our Chardonnay, Pinotage and Merlot stood out.”

Ken Forrester says he experienced an outstanding harvest last year, and this year the average yield was slightly lower on the white cultivars, and slightly up on the red cultivars. “We had a healthy 2020 harvest with nice, balanced analysis, despite some of the late cultivars struggling with ripening due to its virus status,” he says.

For Ken, the late rain that fell during spring in Stellenbosch was perfectly timed, and the farm received 119 mm rain during October 2019. “It was also very beneficial for the early development of the vineyard. 2020 might be regarded as a good season for white wine cultivars with high acidity and low pH levels.”

Van Loveren’s Phillip says that the quality of red wine will be exceptional in 2020. “We managed to get full ripeness this year compared to the last two years where we had a hard time obtaining the necessary sugar levels, including the late rainfall during harvest.”

Ben: “With bud break being seven to 10 days earlier than usual, it’s led to earlier flowering which gave the 2020 season a head start. “The ripening of grapes at a fast rate made the season shorter than usual. Good practices were essential to get the crop in the cellar.”

Carolyn says the quality of the fruit from Creation’s virus-free vineyards was absolutely exceptional this year. “The grapes were plentiful, and the juice ran nicely at the presses. I expect juicy wines that make for easy-drinking styles. The tannins won’t be so concentrated this year, but our top red wine blocks were still very concentrated and the berries not as big as what we saw with the white varietals.”

Alicia initially thought that the red wines were looking a bit “too soft.” But with lengthened skin contact time (thanks to the lockdown), the wines are starting to show nice structure.

Loadshedding proved to be a headache for production at Van Loveren. “It caused a lot of disruption especially in terms of cooling management,” says Philip.

Loadshedding also hampered production for Alicia and her team at Backsberg. “Even though we have generators, the press cycles have to be reset every time the power goes out. We wasted a lot of time, and we had to work longer hours to get the same amount of work done.”

The early rain in the season also posed a challenge for the Van Loveren team. “Two of our Sauvignon Blanc blocks showed 30% sign of rot. Fortunately, the winemaking team handled the grapes correctly and we were lucky to still get a nice wine from these two blocks.”

Ken says the uneven fruit set caused Millerandage in some of the bunches – small, unripe berries deep within ripe bunches – especially in older Chenin Blanc, Merlot and Petit Verdot, and was difficult to remove. “Many had to be cut out by hand.”

Boterberg’s Pierre cites the shortage of irrigation water from the City of Cape Town’s purified sewerage water system, as the biggest challenge during the 2020 season. “It resulted in a smaller harvest for the late cultivars like Shiraz, Cabernet Sauvignon and Malbec.”

From a cellar perspective, Wynand says the occasional machine breakdown caused some problems. But on the grape side, Lanzerac experienced a much bigger harvest which caused a bottleneck during ripening in the middle part of the vintage.

Edmund says the constraints of COVID-19 were a big challenge. “With smaller workforces and many logistical challenges, the coronavirus will forever be remembered as one of the biggest trials of the century.”

Jason Hill’s Ivy says even though harvest came earlier this year, the challenge in the cellar came towards the end of harvest. “To harvest grapes in a time of lockdown was quite a challenge.”

“It’s definitely affected everyone’s mood,” adds Phillip. Wine sales will be a big test for the industry this year as the possible surplus becomes a crisis surplus. “The exchange rate might buffer the initial impact, but every business in our wine value chain will have to think carefully about how their 2020 is going to play out.”

Carolyn: “Although we foresee a tough recovery, we’re positive about the future. We started from scratch in 2002 and we’re proud of what we’ve achieved. We will get through this too with courage, grit and determination. Innovation, of course, will also play an important part.”

What other producers say …

“For us, it’s been the biggest harvest in five years. So, for volume-dependent producers, the region was blessed. But it can still be better. The droughts certainly had an impact on reserves’ build-up with hot winters and little water in the ground.”

“We have no complaints. The vineyards blossomed evenly while the grape ripened evenly over a long period of time – exactly what one wants! The rain came at the right time and the wind (although heavy at times), kept diseases away and helped cool the vines. Our average yield was 9 tonnes per hectare, which is an improvement on 2019.”