HEAR IT FROM HEIN: Confidence in agriculture 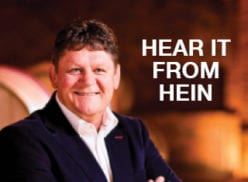 With the ongoing negative sentiment around the profitability of wine in South Africa, the South African wine industry needs to find something that will restore confidence in its ability to be successful.

Such confidence requires credible and responsible leadership along with certainty when it comes to political and policy issues. This was Nedbank economist Isaac Matshego’s message at the Vinpro Industry Information Day earlier this year. The result of such confidence is a stable banking system and macroeconomic growth, which are both fundamental to a positive business environment.

President Cyril Ramaphosa’s performance at Davos and the Commonwealth Business Forum as well as his decisive action towards Eskom boosted investor confidence. The dissapointing performance of the GDP in the first quarter of 2018, however, shows the road to economic recovery is no smooth ride.

To thrive, the wine business like any other requires a stable environment and healthy economy. Within this bigger economic picture, South African agriculture has a few unique challenges. It would for one be ignorant to not acknowledge the issue of land ownership.

There’s no denying the blurred line between agriculture and land ownership in South Africa is risky territory. As an important industry, agriculture contributed R84 616.92 million to the GDP at the end of 2017. While production is the focus, agriculture’s economic impact also extends to other industries such as processing, retail and even tourism, not to mention its importance for international trade.

In South Africa’s farming communities, the importance of agriculture as a commercial enterprise goes beyond its GDP contribution and role as food provider. Agriculture’s exceptional job creation opportunities, across various skill levels and disciplines, support the forming of communities with infrastructure, schools and clinics. When agriculture suffers, whether because of drought or politics, it has a serious negative overall impact on the community.

Agricultural economist Wandile Sihlobo tweets that government spending on agriculture since 1910 came to an all-time low of 2% in 2010. This is not doing anything for the development or morale of agriculture in South Africa. It’s not only established producers that need subsidies and trade agreements. Upcoming producers are in dire need of investment in more ways than one. With the blurred line between agriculture and land ownership, farming has become an emotive issue. Is this perhaps why government is hesitant to support this important industry?

Uncertainty about policy and implementation when it comes to land ownership leads to anxiety and a resulting lack of confidence among producers and other role players in the agricultural industry. While the economic outlook has improved under Ramaphosa, the challenging and sensitive issue of land ownership can harm prospects for agriculture.

How many vines we plant, and how we brand and market wine, are issues often debated by passionate thought leaders in the wine industry. One thing we desperately need however is certainty about our government policies, economic outlook and business opportunities. Along with confidence in our systems, we can’t shy away from empowering ourselves when it comes to product quality and market insight. Only then can we have the confidence to take responsibility for the image of South African wines.