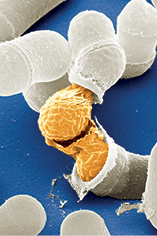 This study looks at the amount and type of oenologically active proteins, which ultimately impacts on yeast strain selection prior to vinification.

The cell wall can be considered the “exoskeleton” of a yeast cell. It is the cell wall that provides yeast cells with their distinctive shape and provides structural support (Lipke & Ovalle, 1998; Aguilar-Uscanga & Francois, 2003). The cell wall consists primarily of polysaccharides, in particular glucan and chitin, which provide the structural support, and mannoproteins, which carry out a diverse set of functions (Pardo et al., 2000). Such functions include catalysis of certain reactions and the regulation of adhesion properties. Beyond these specific functions, it has been well established that mannoproteins that are released from the yeast cells during fermentation can have an impact on wine organoleptic character, including a reduction in astringency or bitterness and an increase of wine body (Charlton et al., 2003; Brown et al., 2007; Chalier et al., 2007). In addition, mannoproteins have been linked to some more “technical” properties, such as encouraging the growth of microorganisms, improving bi-tartrate stability and foam quality (Vernhet et al., 1999; Riou et al., 2002). Our studies have also suggested that these proteins can significantly affect protein stability and thereby reduce wine protein haze formation. This property might have significant commercial potential since bentonite fining, a rather costly practice with some negative side effects, could be reduced.

The mechanisms by which mannoproteins affect all of these parameters are still largely obscure although several hypotheses have been put forward. For example, the mechanism of mannoprotein’s impact on tartrate stability is thought to be based on competitive inhibition, which limits crystal formation (Moutonnet et al., 1999). As a consequence, Ribéreau-Gayon et al. (2000) observed that leaving white wine on lees results in a wine that is relatively tartrate stable and therefore does not require cold stabilisation. Mannoproteins can also directly bind certain phenolic compounds thereby impacting astringency.

Considering the positive impact mannoproteins have on wine quality, a wine yeast strain releasing high quantities of mannoproteins would certainly be a welcome addition to the existing oenological tool box. However, few studies have assessed the general release of proteins by yeast during fermentation.

To better understand the nature of protein release by wine yeast strains, and to better characterise the nature of these proteins, we undertook a proteomic profiling of proteins released by several yeast strains at the completion of alcoholic fermentation into fermented synthetic must, so-called MS300 media, or real Chardonnay grape must. The haze protective potential of these strains was assessed, and two strains that had significantly different impacts on wine protein haze formation were further analysed to study the nature of the released proteins using a method referred to as iTRAQ (Palmisano et al., 2010). This method allows for relative and absolute quantification of proteins using isobaric tags coupled with mass spectrometry. The two strains that differed the most in haze protection ability were from two different species, S. cerevisiae and S. paradoxus.

The experimental strategy followed in this study are shown in Figure 1. Secreted or released protein in wine were first quantified using a Bradford essay, and then visualised using one dimensional gel electrophoresis. Overall, and as shown in Figure 2, there were no significant differences in total protein measured in Chardonnay wine fermented using the selected strains. 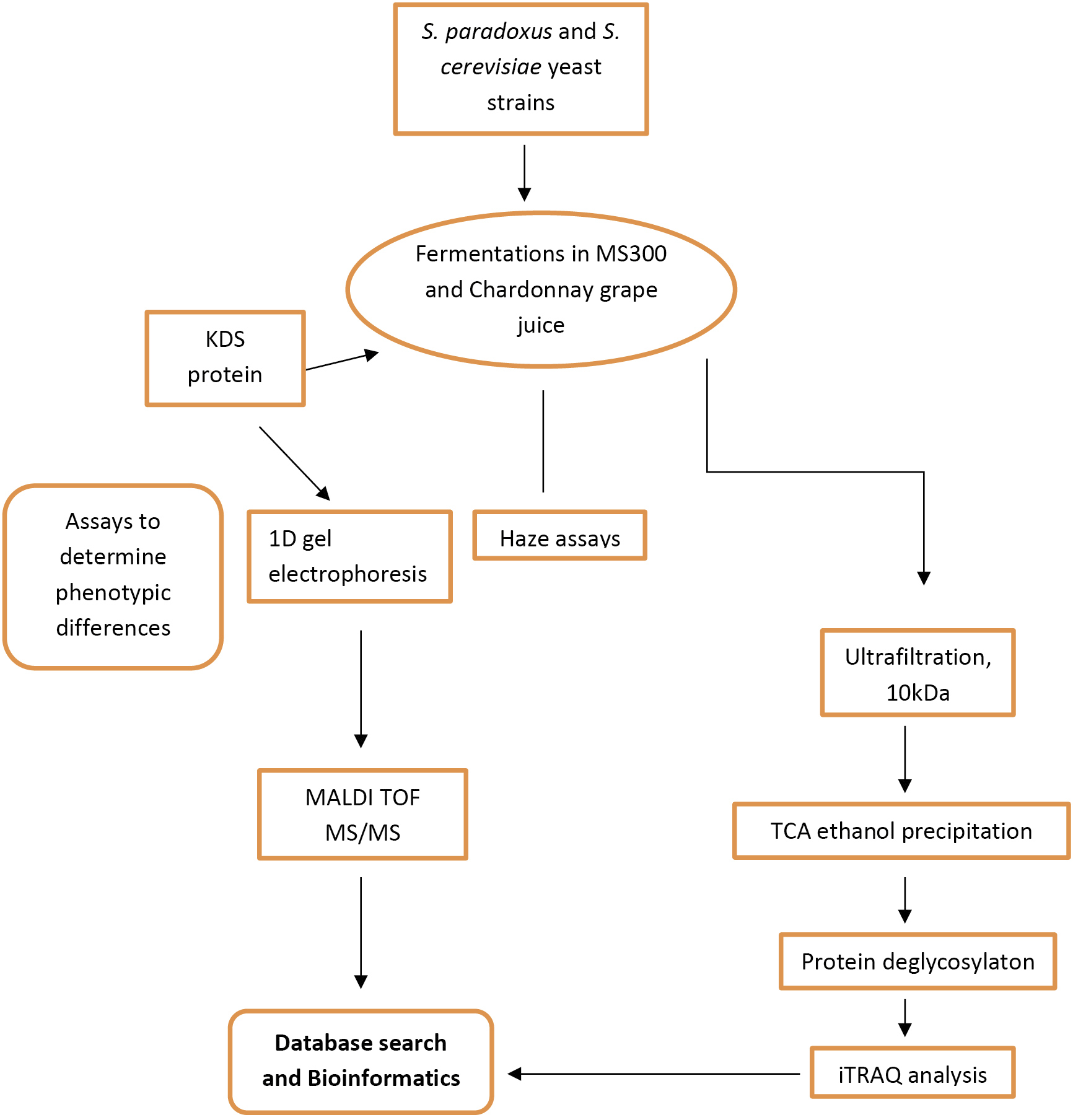 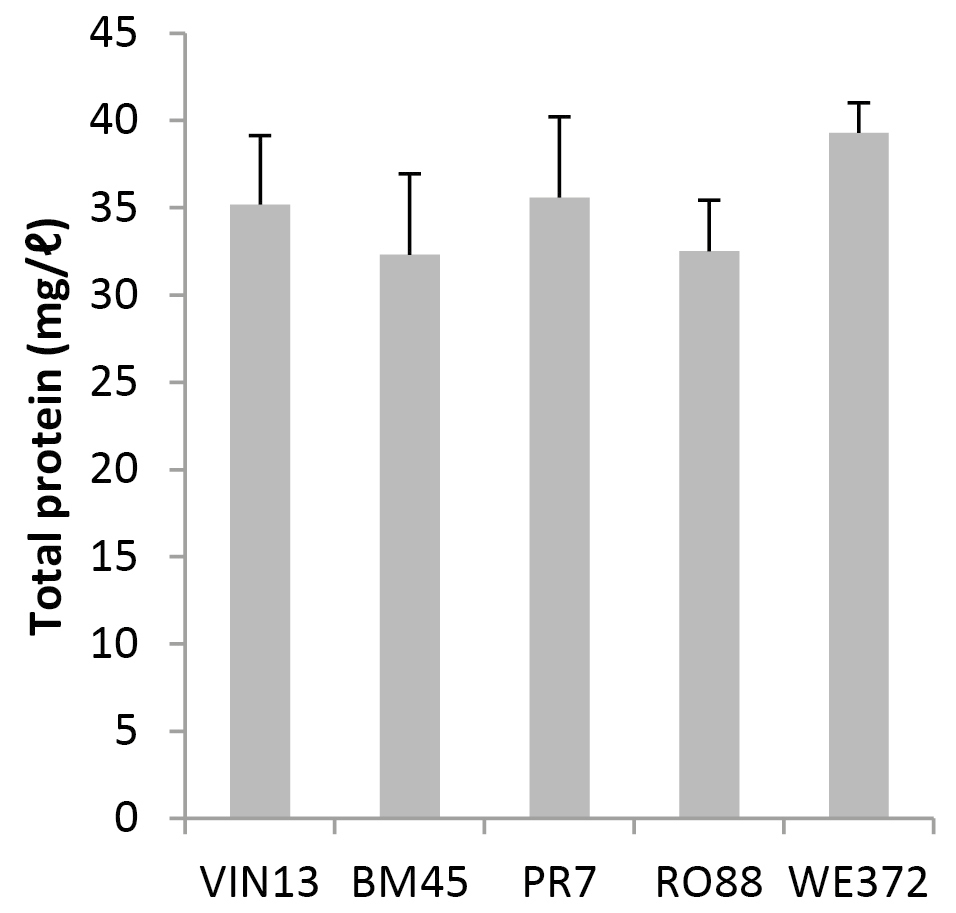 However, our data showed that some of these strains had a significantly better ability to protect wines from protein haze than others (data not shown). This difference was most marked between the S. cerevisiae strain VIN13 (low potential) and RO88, a S. paradoxus yeast strain (high potential). This suggested the possibility that the nature of the secreted proteins differed between these strains.

Proteins and glycoproteins were identified from fermented MS300 supernatant using the iTRAQ analysis. The data clearly show that these yeast strains differ very significantly in the release of individual proteins, and indicate a large number of proteins that are produced at significantly different levels. The most striking feature of the data is that there is a clear separation between the two strains in terms of which type of proteins was secreted or released more efficiently: S. cerevisiae appears to secrete relatively higher levels of metabolic enzymes, while S. paradoxus shows higher levels of proteins that are secreted through the standard protein secretion pathways. Importantly, it is those proteins that will be mannosylated. Such secreted enzymes include invertases and glucanases, and are released in significantly higher amounts by S. paradoxus. Furthermore, two proteins that had previously been identified as having haze protection activities ( Brown et al., 2007) are also found in higher concentrations in S. paradoxus yeast: HPF1 and HPF2/PST1 (haze protection factors).

Most of the proteins highly released in S. cerevisiae relative to S. paradoxus were metabolic proteins whereas S. paradoxus yeast strain released more glucanases and glycosidases, proteins involved in lipid catabolic processes and haze protection. The presence of metabolic enzymes in the medium may appear surprising, since such enzymes are not in principle destined for secretion. However, our data are in line with previous reports showing that indeed a significant concentration of metabolic enzymes tends to be present in the medium (Nombela et al., 2006; Inseser et al., 2010). The reason for this finding remains unknown.

Taken together, the data clearly show that while different yeast strains did not differ much in the total amount of proteins released during fermentation, they differed tremendously in terms of the specific types of proteins that were released. Considering the proposed roles of mannoproteins and their overall positive contribution to the quality of wines, these data suggest that yeast strain selection is a relevant tool for maximising the amount of oenologically relevant proteins in wine. The data also suggest that wines made with yeast strains that produce inherently higher levels of mannoproteins, such as the S. paradoxus strain used in this study, lead to a more protein-stable wine with concomitantly positive sensorial impact, although further studies are required to confirm this point.

This work was ﬁnancially supported by the National Research Foundation (NRF) and the South African Wine Industry (Winetech). MS data were obtained from the Proteomics Core Facility, University of Gothenburg, Sweden. Part of the data was collected on equipment obtained by a grant from Knut and Alice Wallenberg foundation to Gunnar Hansson (KAW Grant 2007.0118). iTRAQ MS analysis was provided by the Proteomics Core Facility at Sahlgrenska Academy, University of Gothenburg, Sweden.

Aguilar-Uscanga, B. & Francois, J., 2003. A study of the yeast cell wall composition and structure in response to growth conditions and mode of cultivation. Letters in Applied Microbiology 37, 268 – 274.