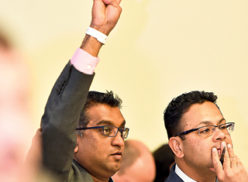 The total sales of R13 223 200 at this year’s Nedbank Cape Winemakers Guild Auction failed to exceed last year’s record R13.8 million. But several other records were set at the event, illustrating the value of the auction wines.

The 61 wines that went up for sale at the 33rd Nedbank Cape Winemakers Guild (CWG) Auction were the envy of local and international wine aficionados. A total of 142 buyers competed for 2 962 cases comprising 41 red wines, 19 white wines and one Méthode Cap Classique. In the end they were all sold for an average of R4 464 a case and R744 a bottle. But as impressive as these figures might sound, that is exactly what they are – mere figures.

CWG chairman Miles Mossop puts things into perspective. “In light of the current economic climate, the results of our 2017 auction bode well for the South African wine industry as a whole and prove there’s still room for quality top-tier wines that push the envelope in terms of innovation, creativity and diversity of styles,” he says.

A notable achievement at the auction was the highest bid for a case of white wine – Kevin Grant’s Ataraxia Under the Gavel Chardonnay 2016 which fetched R7 000.

Other top sellers per case were:

While some members are bidding the auction farewell, others are joining it. Kaapzicht Wine Estate’s Danie Steytler’s swansong as guild member and winemaker earned his wine, The Ultimate Vision 2015, a record R16 600 for a six-bottle case – a fitting farewell to a true SA wine legend. Newcomers to the action included Bruwer Raats with B Vintners Inboet Storie Cinsaut 2016, Morné Vrey with Delaire Graff Estate Banghoek Chardonnay 2016 and Carl van der Merwe with DeMorgenzon Gravitas 2015 and DeMorgenzon Rousanne 2016.

Morné, who joined the CWG last year, says he’s been an admirer of the guild and its legendary greats for ages. “I’ve been aspiring to become a guild member and now I’m part of this exclusive group. I can really say it’s all about being in good company – in other words, winemakers who are serious about their wine, the SA wine industry and collaboration. These guys get together regularly to taste good wines and share their opinions and thoughts.

“I’m grateful to Louis Strydom of Ernie Els Wines who nominated me for CWG membership. My membership also has immense value for Delaire Graff Estate as the CWG is internationally acclaimed and has the right recipe for success. Then there’s also the guild’s contribution to transformation. It’s actively making a positive difference in people’s lives. Take for instance Morgan Steyn, one of the students on the CWG Protégé Programme. He’s gained loads of experience at Ernie Els Wines and will join our team at the end of this year.”

The CWG Protégé Programme was established to develop the talents of young winemakers and viticulturists through the Nedbank CWG Guild Development Trust and raising funds for this noteworthy cause is one of the auction’s most admirable goals. The charity lot at the auction, 44 magnums from all the guild members who had a wine on auction, fetched R140 000. Then there was also the silent auction that raised R282 900 on the day of the auction. The funds raised will go towards further developing the CWG Protégé Programme.