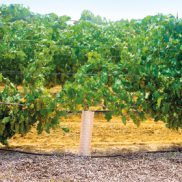 There are compelling reasons for using inboetstokkies to increase the lifespan of a vineyard and to avoid underutilising soil capacity. Sandile Mkhwanazi investigates.

The planting of replacement vines, commonly known as inboetstokkies, has been neglected, with producers uprooting blocks once they become unproductive.

The production lifespan of a vine determines its economic viability, as diseases and viruses may cut it short. By applying the alternative method of replacement vines a producer can maintain production levels and increase the life expectancy of the vineyard. WineLand discussed the importance of this practice and its influence on age classification and flavour diversity with Francois Viljoen, the head of consultation at VinPro.

In cases where a vine has dieback or root rot disease or dies due to mechanical damage or stunted growth, the common practice is to uproot and replace it with a one year old vine. In the case of dieback, vines show signs of infection only 10 years after planting. This affects yields, as replacement vines are needed to cover gaps within the vineyard and maintain production levels.

“Rising production costs justify the need for replacement vines. If 5% of 100 hectares under vines consist of gaps, that translates to a 5% loss in spraying, irrigation and many other practices,” Viljoen said. He further pointed out that, although planting and caring for these vines have time management implications, the long-term effect is positive, especially in view of what the practice has done for other wine-growing countries.

By replacing old and unproductive vines by means of inboetstokkies one rejuvenates the block through the introduction of young vines. “In Burgundy, this practice accounts for at least 2 – 5% of their vines. Yet, when classifying the block, the original age is taken into account,” Viljoen said.

According to him, this method has proven to be a winning card for them as they cannot afford to uproot entire blocks for new plantings.

“This also gives producers diversity. A block will contain vines of different ages, which will bear different fruit, due to their growth level,” he said. As the classification of that specific block retains its initial age, the marketing value of the older vineyard is maintained.

“The productive life of a vine is approximately 20 years in current South African conditions. If the area under vine is not formed optimally e.g. dead vines not replaced in a vineyard block, this means that the vine cordon per meter is underutilised. The inputs however remain the same per hectare as these gaps cannot be circumvented. Inputs including pesticides, irrigation and herbicides are essential wasted due to open spaces in the vineyard block said Van Zyl. Such losses will have dire effects for the producers in the current economic conditions.

”If the blocks are being optimally utilised, then maximum production will be reached. This means that the producers can shorten their break-even points, while maximising the lifespan of the vine.’

Points to consider when planting inboetstokkies:

Viljoen further points out that the first two years of an inboetstokkie are crucial for successful growth. “The vine is planted in a block that contains older vines. Root competition is fierce as most of the other vine roots have already colonised the soil. Hence the care of individual inboetstokkies is crucial. This relates to herbicides application, as most replacement vines are destroyed in the process. This is where growth tubes come in handy.”