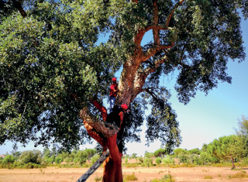 Amorim Cork’s unparalleled investment in innovation and design has made it a global leader in its sector.

Less than 15 years ago Amorim Cork’s share price plunged when its biggest customer, the wine industry, turned its back on cork and started flirting with cheaper alternatives.

The reason? The dreaded cork taint – that mouldy smell sometimes caused by microscopic fungi found in cork-tree bark. Winemakers in New World wine countries and some from the Old World shook their heads vehemently when it came to the natural stopper, marketers suddenly enlarged their portfolios with plastic and Randall Grahm of Bonny Doon Vineyards in California held a special dinner in New York in 2002 to mark the death of cork.

That was then. Today Amorim’s share price has soared once again and exports around the globe are at an all-time high. Showing remarkable aleadership, Amorim triggered a paradigm shift. It realised the endless potential of cork and, addressing the entire value chain in a sustainable way, transformed this 100% natural raw material into a desirable item.

Amorim launched a massive R&D drive focused solely on ridding itself of the blight of tainted cork and all its attendant negatives. Millions were spent and it was not until Amorim unveiled its NDTech process that people in the winemaking world began to take notice. The individualised quality-control screening technology for natural cork stoppers delivered the world’s first natural corks with a non-detectable TCA guarantee.

No wine stopper producer had ever before been able to ensure a quality-control procedure for natural cork stoppers that both fosters the elimination of TCA to subthreshold levels and individually confirms that each cork meets this standard.

How does it work?

“NDtech constitutes the ultimate technology to combat TCA and is based on the deployment of fast chromatography to deliver the world’s first natural cork with a non-detectable TCA guarantee,” Amorim marketing director Carlos de Jesus explains. “The level of precision required to meet this standard is astounding, given that 0.5 ng/litre is equivalent to one drop of water in 800 Olympic-sized swimming pools.”

The NDtech process is based on individual tests for every wine cork for TCA. It uses fast chromatography technology developed through a partnership between Amorim and a specialist firm based in Cambridge in the UK. This new fast chromatography machine can analyse each cork in seconds, thus shattering the previous testing times in existing chromatography machines that typically require up to 14 minutes for each batch of corks. The high-precision screening technology can detect any cork with more than 0.5 ng TCA/litre (parts per trillion), which is then automatically removed from the supply chain. As a result, all corks processed using NDtech are non-detectable TCA-guaranteed, which means the releasable TCA content is below the 0.5 ng/litre quantification limit.

This cutting-edge screening technology is complemented by Amorim’s existing preventive and curative quality-control methods, including its patented ROSA Evolution treatment machines that are used in conjunction with the NDtech screening technology during the production of all natural corks.

Currently Amorim screens about 50 million corks annually, but with more investment in new technology the sky’s the limit. This would mean substantially increasing the number of screening machines and speed at which they operate.

“Ideally we want every natural cork to come with a non-detectable TCA guarantee,” Carlos says.

Internationally the big names switched back from screw cap to cork and with worldwide wine consumption moving from volume to value, the NDTech corks, Amorim’s crème de la crème offering, are set to be a game changer in South Africa and abroad.

But Amorim is not renowned only for its innovation in technology and products for the wine industry. It’s also synonymous with sports equipment, railway projects, spacecraft and cosmetics. It’s also focused on the green economy, which is so crucial in this modern day and age.

As the largest producer of cork products Amorim, which was founded in 1870, operates in more than 100 countries and sells more than one billion corks annually. It leads the entire sector and by contributing to innovation in the cork industry it sustains this industry in various ways. Amorim has developed a portfolio of high value-added products and solutions, and by anticipating market trends it delivers products that surpass the expectations of some of the most demanding industries in the world. It also realised the importance of preserving cork oak forests to sustain the industry, which it does by balancing economic, social and environmental factors.

“It’s always about people first,” Carlos says. “Then the planet. Then profit.” l

No wine stopper producer had ever before been able to ensure a quality-control procedure for natural cork stoppers that both fosters the elimination of TCA to subthreshold levels and individually confirms that each cork meets this standard.