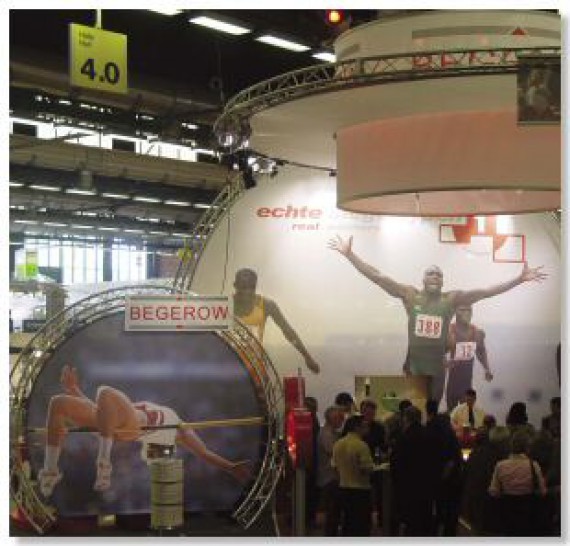 In an era where wine and related technology exhibitions strive for more internationality, this mammoth three-yearly wine and fruit technology expo in Stuttgart boasts significant increases in both foreign visitor numbers and exhibitor participation.

This year, 34% of the 578 exhibitors were foreigners from 26 countries (16 in 2001), while 25% of the 40 689 trade visitors were from 76 countries (61 in 2001) outside Germany. This represents increases of 4% and 5% respectively – giving the organisers, Messe Stuttgart, reason to claim being “the world’s leading event ahead of the corresponding rival exhibitions in France and Italy, which lag well behind in terms of internationality”.

A further boost to this event is its growing network of official involvement in international technology/wine expositions, already involving five events in different countries, including the well-established Wine Farmers and Fruit Growers’ Exhibition in Cape Town in which it has shareholding.

According to a press announcement made during this year’s five day event in Germany during May, Intervitis Interfructa will continue its “systematic internationalisation strategy”. The managing director of the show facility, Messe Stuttgart, Ulrich Kromer, announced that “offshoots” of this event would be held in Talca, Chile, in September 2004 and Vienna in May next year – the latter focusing on Austria, the Czech Republic, Hungary, Slovakia and Slovenia.

There is already collaboration with the ProWein exhibition in Dusseldorf and Viteff Sparkling Wine Technology Trade Fair in Epernay, Champagne.

Intensive co-operation is taking place with Cape Town, South Africa, and there are also moves afoot for Intervitis to get a foothold in Australia.

Because of its continued momentum the event will move to a new state-of-the-art venue offering 100 000 square metres of exhibition area. Also in Baden-Wirttemberg, the Stuttgart Trade Fair Centre is being constructed adjacent to the local Airport and on the major motorways, for the next round at the end of April 2007. Not that transport appears to be a problem, with the city’s excellent rail system, both under and above ground.

On my first visit it was a rather a strange experience to travel a few minutes underground from the city centre, to disembark, go up an escalator and suddenly find myself right inside the foyer of the exhibition centre. German efficiency for you!

The communications manager for the show, Thomas Brandl, explained in an interview that the event had outgrown the present venue in Kilesberg and that it was now worthwhile looking at a modern venue based on changed needs and practical experience.

In my own experience, visiting the event for the first time during May this year, Messe Stuttgart is an impressive venue, but a bit cramped with visitors and exhibitors and their paraphernalia – remember, technology exhibitions often involve huge items like harvesters.

The exhibition ‘city’ of 14 halls in addition to conference facilities ‘fan’ out at different floor levels from this foyer. All a bit confusing, despite the ample supply of maps, and making it difficult to locate specific exhibitors … and to find your way back after some typical wine hospitality.

Brandl pointed out that the total visitor numbers were actually down on 2001, but emphasised that they had aimed at internationality and professionals, instead of numbers. So the decrease involved ‘hobby vintners’. This involved an intense programme of targeting professionals around the globe, instead of counting much on casual visitors.

“Messe Stuttgart harvested through this success the fruits of their global marketing activities for Intervitis Interfructa 2004, which included more than 20 presentations of the trade exhibition on every continent.”

The general secretary of the German Winegrowers’ Association, Dr Rudolf Nickenig, said the fact that the number of hobby and part-time winegrowers in Germany had been decreasing substantially for years, was also reflected in the visitor structure of the show.

The products and services offered are divided into five categories:

The supporting programme of international symposia and topics – such as new oenological processes (must concentration, use of oak chips) in the cellar, or cultivation techniques in fruit farming and wine growing – involved some 90 selected speakers.

The largest number of trade visitors came from France, followed by Austria, Switzerland, Italy, Luxembourg, Hungary, Slovenia, the Czech Republic and the Netherlands. One out of two foreign visitors attended the trade exhibition in Stuttgart for the first time. Altogether 91% of trade visitors said they were involved in purchasing and procurement decisions in their company, while 45% actually had sole responsibility for these decisions.

A highlight of the proceedings was the announcement at a typically glamorous gala dinner of the German Wine Growers’ Association’s Innovation Awards. The four Gold Awards went to:

Vino-Lok glass tops from Alcoa Deutschland (Worms):
A decisive technical advancement in the packaging of wine. The existing sealing possibilities up until now – natural cork, synthetic cork, twist-off top – have been supplemented by a high-quality, taste-neutral and gas-tight alternative. The Vino-Lok system consists of an aesthetically appealing glass top with a special seal and an aluminium covering.

A novel product, developed to prevent fermentation delays or interruptions. Thanks to its proportion of inactive yeast it counteracts nutrient deficits, particularly in micro-nutrients. Another feature assessed as innovative was that the preparation is already used for the rehydration of dry-pure culture yeast, whereby this can enter the fermentation phase with strengthened minerals.

EuroSelect destemmer from Scharfenberger Maschinenbau GmbH (Bad Dirkheim):
The novel way that the Scharfenberger destemmer functions, based on gravity, allows an optimal separation of the berries and stems and at the same time a gentle processing of the harvest, thanks to its wide range of settings. The high-quality further processing of the grapes is optimised through the possibility of a harvest selection.

The universal vine defoliator from the French company Pellenc SA (Pertuis).
The gold-winning defoliator was based on an impressive design solution: on both sides of the vine line in the area of the grapes zone there is a rolling barrel moving along the leaf canopy in the direction of travel. The jacket of the barrel is made from a flexible fabric, whose lateral contact pressure to the canopy is electronically controlled, which prevents the grapes becoming damaged.

The paint that breathes
The other South African stall, which attracted considerable attention, was that of BreatheCoat, with managing director Siegfried Domrise from Somerset West in attendance. He demonstrated through a simple experiment of boiling water covered by membranes – respectively of a conventional paint and his unique coating system – how moistures escapes through the minute pores of the BreatheCoat product.

BreatheCoat is a South African invention, using unique polymer technology to create a breathing membrane once it is applied. Originally developed by Domrise, formerly of the University of Stellenbosch’ Polymer Department, it was first employed to protect and beautify the many historic buildings in the area. It is increasingly applied in wine cellars where damp problems are experienced and chemical smells are undesired. A bonus is that his system is also fire resistant.

Versatility in synthetic closures
Classic Closures from Cape Town were represented at Intervitis Interfructa for the first time and Martin Gassner, managing director said considerable interest was shown in the company’s synthetic closures, already being exported to several countries.

Their product range comprises: Classic Corks, Classic T-Tops and Classic Wine Bungs. All of these are manufactured to exact and extremely high standards of quality. Durable, recyclable and reusable Classic Closures are injection-moulded from an advanced polymer ‘alloy’.

The Classic Cork range is available in three variants: Classic Econo, Classic 38 and Classic 43. They come in 14 different colours and can be printed to specification

The Cap Classique Producers Association has re-positioned its marketing objectives to highlight the importance of time in the making... END_OF_DOCUMENT_TOKEN_TO_BE_REPLACED

The South African wine industry acknowledges the greater understanding from government with the announcement of the latest excise duties... END_OF_DOCUMENT_TOKEN_TO_BE_REPLACED

The wine industry body Vinpro recently appointed Dr Langelihle (Langa) Simela to its board to provide strategic insights into... END_OF_DOCUMENT_TOKEN_TO_BE_REPLACED
Go Back
Shares