Felco’s main goal is to give recognition to all its pruners who have to perform this difficult but absolutely necessary task. Training of Agri Workers is our first priority.

A happy trained pruner is a great asset to any producer. Felco was the first pruning company to begin official pruning training, secateurs maintenance and pruning competitions and still do with the help and advice of viticulturists and academic institutions in the industry.

“With our first pruning training and pruning competition back in 2010 by the late icon Prof Eben Archer, we realised that there was a great need. The following year, we approached VinPro to help us with the organisation and management of these courses for the wine industry. This later gave rise to training videos and course material which greatly facilitates the producer’s task by also offering it himself according to the latest research on pruning methods in the industry. Currently, the training has expanded to all sectors. From gardening to the fruit industry, there are courses to help pruners and growers,” says Gys Liebenberg, managing director at Felco Africa. 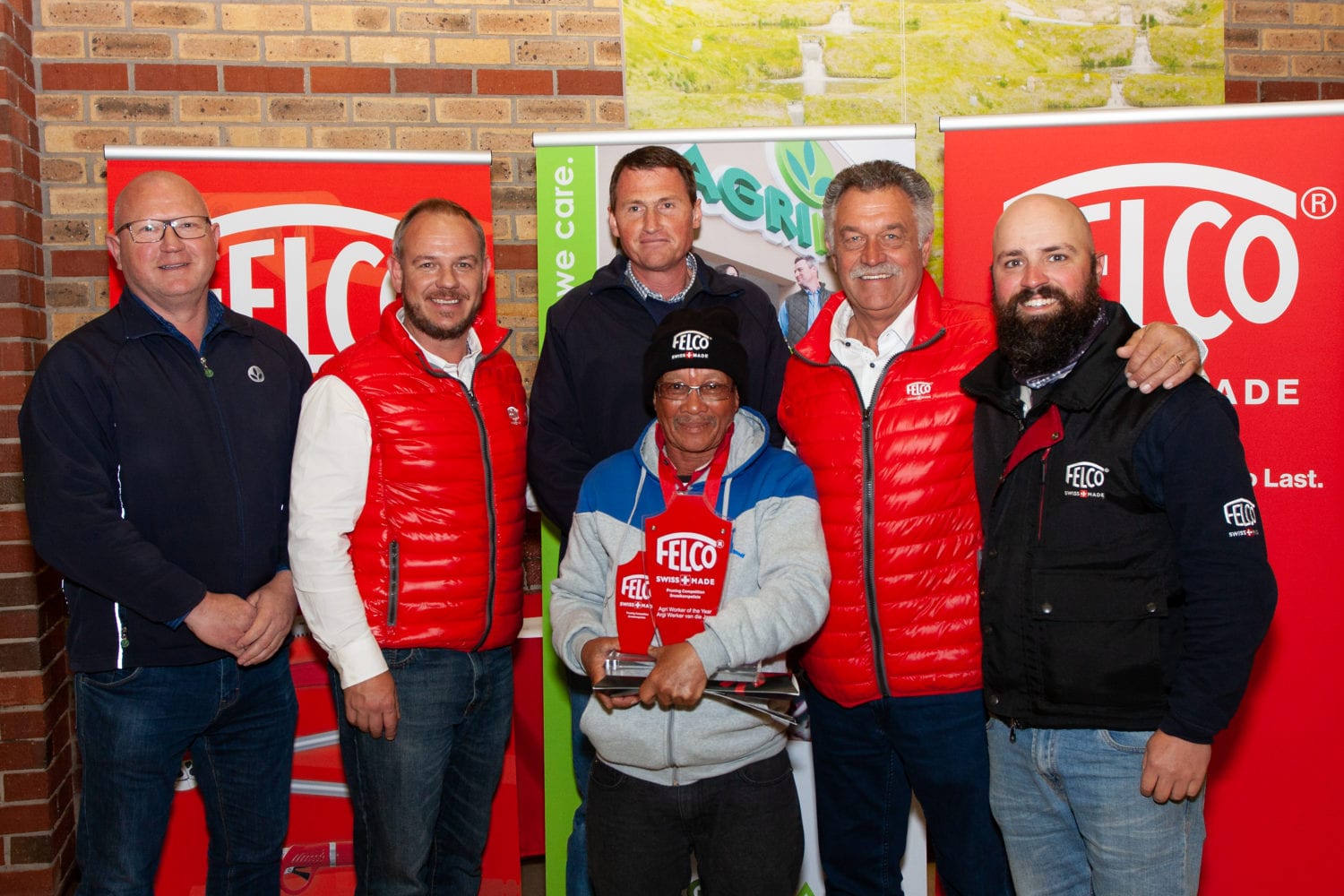 Isak Muller (centre) of the Navada farm, Koekenaap was crowned the overall winner of the day.

A total of 19 heats (competitions) were held and the three best pruners from each region were then taken to the final round which took place at Elsenburg Agricultural Training Institute’s farm. About 450 pruners participated in the eliminating rounds in total.

Isak Muller of the Navada farm, Koekenaap was crowned the overall winner of the day. He out performed all the Agri workers, Students and learners and won the following:

Isak was born in Calvinia Hospital, aged 59, married to Dina and has 5 children and 8 grandchildren. Played football for Koekenaap Rangers until Dina started giving him too many tasks around the house. Isak’s pillar is Dina, his deeply believing Christian wife at home who make sure he has a full stomach and clean and warm clothes.

He learned his pruning skills from his father Attie Muller. As a contract worker, Isak became acquainted with Johan Fourie, owner of Navada. In 2008, he permanently start working on the farm. He received much of his schooling on proper pruning practice from Gideon Engelbrecht, viticulturist at Lutzville Vineyards. Isak is currently responsible for all the pruners on the farm as well as the training of newcomers who will be pruning on the farm for the first time. He is also responsible for supervising the correct training of the young sticks.

He loves chores in the vineyard and in his spare time he always wants to spend with his family. He prefers a Felco pruner because it prunes more comfortably. Johan, the owner of Navada says that Isak from day one insisted on pruning with a FELCO scissors. If the farm didn’t want to buy one, he was prepared to buy his own FELCO. His advice is to always choose your pruning shears according to your hand size. His favourite is the FELCO 6.

The guest speakers for the day were Rosa Kruger, Independent viticulturist and recipient of the 2018 International Wine Challenge personality of the year and AJ Griesel, Director of Agriculture and Retail with Jaco Engelbrecht of Visual Viticulture as judge.