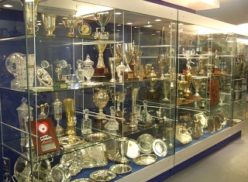 Kanonkop Wine Estate also deserves a special mention for winning the Pinotage Trophy with their Black Label Pinotage 2013, as well as being the South African Wine Producer of the Year. Abrie Beeselaar was also announced as the Internation Winemaker of the Year.

Gold Outstanding 2017 trophies were awarded to:

Full results can be seen at https://www.iwsc.net.