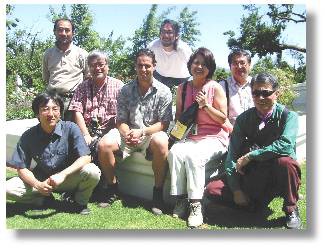 The Japanese are fast becoming more and more sophisticated wine drinkers, which means business for the South African wine industry.

This became clear during a two-way region to region initiative to support the economic and technical exchange between the Yamanashi prefectures, famous for wine production of the “Koushu Wine” brand in Japan, and the South African wine industry.

This initiative was initiated by the Japan External Trade Organisation (Jetro), a government organisation that attracts foreign businesses to help revitalize the Japanese economy, assist small Japanese export companies, facilitate foreign access to Japan, collect and analyze overseas economic information for dissemination in Japan, provide consultation on trade and investment, and facilitate economic growth and research in developing countries. The aim of this project is to reach an agreement for technical co-operation in grapevine cultivation and to export winemaking equipment and materials from South Africa to Japan.

The first phase was a visit to Japan by Prof Kobus Hunter, viticultural expert from LNR-Nietvoorbij where he engaged in many activities to assist the Japanese wine industry and to market South African wines and viticulture technology in Tokyo and Yamanashi. The second phase included the visit of the Katsunuma Wine Club, when nine members of winemaking companies of Katsunuma in the Yamanishi region visited the South African winelands. This visit included wine tastings at different cellars, a visit to LNR-Nietvoorbij and the Ernita nursery. Discussions on the Japanese food and wine culture, as well as how to market local wines in the Japanese market also took place.

South African wine producers also stand to gain through export promotion opportunities to the rapidly growing wine consumer market in Japan by greater exposure in the Japanese marketplace. Over the past few years, a significant trend in Japan is an increase in wine consumption and a popularity of imported wines. South African wine is ranked in 8th position in terms of Japan’s total import of wine. And according to Mikio Nagata, executive director of Jetro Johannesburg, South African wines are not well known in the Japanese market because of the distance and a lack of information.

“Through this initiative, Jetro expects to increase two way knowledge about the wine industry by arranging opportunities for face-to-face meetings with the Japanese and South African wine industry stakeholders. This will assist in determining potential areas for trade and technical transfers in the industry.”

The leading exporter of wine to Japan is France with 40,6% in 2002 on volume basis followed by Italy (19,9%), the United States (9,6%), Chile (6,4%) and Spain (5,7%). These top five exporters together account for about 82% of Japan’s wine imports. Per capita annual liquor consumption in Japan averages 98 litres, with beer being the favourite (43,2 litres per capita consumption) and wine with 2,7 litres.

Comexposium (global event organiser) and Vinexpo Holdings (held by the Bordeaux-Gironde Chamber of Commerce and Industry – CCIBG) have... END_OF_DOCUMENT_TOKEN_TO_BE_REPLACED

Every year, the presentation of the prestigious 1659 medal of honour (erepenning) to a wine icon is a special... END_OF_DOCUMENT_TOKEN_TO_BE_REPLACED
Go Back
Shares