Keepers of the land 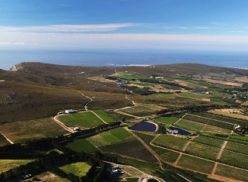 We often make the mistake of looking at a landscape like Hemel-and-Aarde and regarding it as static space, when quite the opposite is true. Over millions of years, the earth shifted and moved, creating wide variations all over the world associated with different climates and belts of vegetation. With the quintessentially French concept of terroir so visible in this growing area, it is incredible and humbling to know that we, as keepers of the land, can interpret and express hundreds and thousands of years’ worth of soil and climate in a single bottle of wine. We are lucky that we do not have any climatic extremes in either directions, which means that the Hemel-and-Aarde winemaking teams can effectively deal with the inconsistency of seasons. Continental climates are being hit the hardest by climate change and our proximity to the ocean means that the Atlantic Ocean is the biggest terroir influence, acting as a buffer for major temperature fluctuations. In the Hemel-and-Aarde, the best sites stand out in poor years. Diverse pockets of soil are only kilometres apart, with the celebrated subsoil, clay and visibly plutonic granite feature as some of the major dirt here.

In May 2004 the Walker Bay Wine Ward was reclassified as a Wine District – one of 21 of the South African winelands. Given its size which is close to that of the Stellenbosch District and the greater number of wine producers active in the area with a multitude of different wine styles, it became increasingly difficult for the Walker Bay to justify Ward Status. A Wine Ward is the smallest unit of an appellation after an individual Wine Estate and is supposed to delimit an area of relatively homogenous terroir. With the reclassification of the Walker Bay as a Wine District, the door was open for producers in the District to create their own more relevant Wine Wards with the assistance of a committee of soil specialists and viticulturists. Three Wards were created in the Hemel-and-Aarde area, namely Hemel-and-Aarde Valley, Upper Hemel-and-Aarde Valley and Hemel-and-Aarde Ridge.

The Hemel-and-Aarde Valley is the first appellation as you leave Hermanus and enter the Hemel-en-Aarde Valley, heading towards Caledon. It is also home to the first vineyards planted in the area and of the three appellations is the closest to the Atlantic Ocean. The overwhelming majority of the vineyards in this appellation are planted on northeast, north and northwest facing slopes of Bokkeveld Shale-derived soil on the southern side of the Onrus River. This soil has unusually high clay content and although it varies from 25% to 55%, tends on average to be much higher than the Malmesbury Shale-derived soils of the West Coast. The clay content of these soils approximate the clay contents of the Cote D’Or in Burgundy, although they tend to be shallower and far stonier. In addition, they do not have the limestone content or limestone bedrock, but have pure clay subsoil and solid shale bedrock. For the South African winelands these soils would be classified as low-vigour and more marginal. Higher up on the northern slopes of the Hemel-and-Aarde Valley and on the south facing slopes of the valley, the soils are Table Mountain Sandstone-derived. These quarzitic, sandy soils have a very low to non-existent clay content and are light structured, generally far deeper and have the potential for greater vigour.