KWV Brandy pulled out all the stops at the KWV House of Fire, hosting South Africa’s top bartenders and creative gourmands and ultimately, crowning the winner of the KWV Brandy Reimagined competition.

Last night (12 June), KWV‘s age-old brandy distillery room, House of Fire, – complete with old copper potstills and barrels made from French oak – was transformed into a glamorous setting for KWV’s Brandy Reimagined competition. From bartenders serving up unique, brandy-inspired cocktails, gourmet chefs dishing up mouth-watering cuisine and even a energetic DJ spinning decks, it was an evening marked with top-notch entertainment.

To mark KWV’s 100 years of excellence milestone, the brand launched a nationwide competition called ‘KWV Brandy Reimagined’ to showcase the drink’s versatility. In recognition of its proudest supporters, KWV Brandy identified top mixologists who had to battle it out to win a limited release bottle of KWV Nexus (valued at R24 000).

The judges in the KWV Brandy Reimagined competition searched for mixologists who can carve out the path that KWV Brandy will follow for the next 100 years: More than mixologists, these bartenders are futurologists (or Futurists).

The winner was announced at a grand finale and awards ceremony at the home of KWV Brandy, the House of Fire, in Paarl last night. Each finalist had a cocktail station set up  and had to ‘shake, stir and swirl’ their cocktails in order to win favour with the guests.

But the evening served up a juicy twist: Although the judges’ votes were already tallied, the organisers decided that the competition winner will be determined by those in attendance.  Mixologists had to wow the crowds with their creations in order to win their vote.

Jerome Adonis, brand manager for brandy at KWV, said the KWV Brandy Reimagined mixology competition showcased just how ingrained KWV Brandy is the hearts of South Africans. “It was encouraging to hear bartenders’ stories about KWV Brandy. Their cocktails were inspired by pleasant memories of social gatherings, braai fires and sentimental family get-togethers, for which KWV Brandy had a seat at the table,” he said.

Maynard Booyzen from Johannesburg, with his beetroot-inspired brandy cocktail, was a clear crowd favourite, winning the KWV Brandy Reimagined competition, including a bottle of KWV Nexus worth R24 000.

It was Maynard Booyzen from Johannesburg won ultimately won the KWV Brandy Reimagined competition as the next KWV Brandy Futurist, walking away with a bottle of KWV Nexus (worth R24 000). In a nod towards the trend which sees plant-based ingredients as an exclusive feature in food and drinks, Booyzen incorporated vegan and vegetarian ingredients in his drink. His creation was called ‘Bring the ‘Beet’ Back – a combination of roasted walnut, beetroot and ginger flavours, perfectly blended to produce a sweet, earthy and beautiful KWV Brandy-based cocktail.

“It’s just incredible to walk into this facility and experience the age-old tradition of brandy distillery. You can’t help but think of all the true artists who’ve walked these halls over the years, working and blending and making this incredible liquid. You become truly humbled by it. This evening is a celebration of the artists in our society, this incredible liquid we call brandy and all the incredible added drinks that allows us to explore and really appreciate it,” said KWV CEO, Boyce Lloyd.

VIEW OUR GALLERY OF IMAGES: 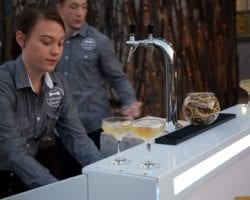