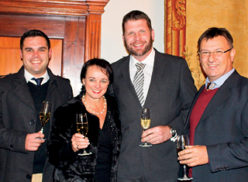 Astute marketing and a commitment to unlocking value for entrants have seen the Michelangelo International Wine & Spirits Awards go from strength to strength.

Now in its 21st year and acknowledged as South Africa’s leading and only truly international wine and spirits competition, the Michelangelo International Wine & Spirits Awards is continuing to set the standard.

But a record number of entries from producers and judging panels, mainly made up of international experts flown in specially for the event, are not the only aspects that set this competition apart.

Astute marketing minds overseeing the brand and a commitment to unlocking value for entrants have ensured that the Michelangelo has been seen as a leader in the field of wine competitions since its inception in 1997.

“Our competition has always been committed to ensuring that producers entering the competition and the people who follow the lauded wines and spirits, find value in the Michelangelo brand,” MD Lorraine Immelman says.

This year, for example, the competition has embraced the world’s increasing dependence on technology to bring a world first to wine competitions. “Using various experts in the field of digital marketing, Michelangelo has embarked on a ground-breaking project that’s a world first, as far we know,” she says. From now on the coveted Michelangelo award stickers – from silver and gold to double gold, platinum and all the way up to trophy award stickers – will carry a QR code. When scanned on retail, restaurant or hotel customers’ smartphones, the code will provide access to succinct and varied information on the product, including tasting notes and a guide as to where it can be bought and/or ordered. Data on the major Michelangelo sponsors – Airlink, Tsogo Sun and Multi-Color Corporation – will also be accessible.

“Wine is made in the vineyard and spirits are crafted in the pot still,” Lorraine says. “But it’s up to events such as the Michelangelo to embrace innovation and technology to ensure consumers and the various producers who enter the competition benefit from the exposure and marketing initiatives we’ve embarked on.”

The quality and standard of a competition such as the Michelangelo International Wine & Spirits Awards are often reflected by the standard of sponsors and associates joining forces to bolster the event. And this year two of the leading brands in the South African hospitality industry – Tsogo Sun and Airlink – have partnered with Michelangelo to ensure the entries are promoted among travellers, tourists and the wine- and spirits-loving public in general.

“Together with Airlink and Tsogo Sun, Michelangelo will be in a position to literally spread its wings and open doors throughout South and Southern Africa,” Lorraine says.

This sponsorship will see wine entries automatically selected for on-board service on Airlink. Tsogo Sun is one of the South African hospitality industry’s largest wine purchasers, exposing thousands of people to its wine offering through 14 entertainment destinations and over 100 hotels. As a Michelangelo sponsor, Tsogo Sun will use its extensive marketing channels to promote the competition and participating producers.

This year over 1 600 wines and spirits were entered for the competition, with judges comprising 28 drinks industry experts from 22 countries.

“Since starting out, Michelangelo consists of experts from across the world,” Lorraine says. This year’s judging panels included journalists, educators and sommeliers from France, Germany, the United Kingdom, Ireland, Greece, the Netherlands, Japan and Thailand, with one South African palate on each of the panels. Judging was done in August.

“For wine producers, Michelangelo is recognised as one of the most important wine competitions in South Africa due to it being the only one depending on a line-up of largely international judges,” she says. “Producers enter the competition as it’s important they learn what wine critics from other countries say about their wines. Remember, over half of South Africa’s wines are exported, so international comment and opinion are of the utmost importance to wine producers.

“As far as wine-lovers and consumers are concerned, good scores and winning medals and trophies at the Michelangelo affirm the quality of those specific wines. They can be bought with the knowledge they carry not only the Michelangelo seal of approval, but the approval of an international panel of experts.”

And if the comments of this year’s Michelangelo judges are anything to go by, there are a lot of good wines and spirits out there.

During the judging process, several international wine personalities took time off from their frenetic schedules to voice opinions on the wines and spirits they’d tasted.

Judges were unanimous in stating that South Africa is producing excellent wines with true regional expression capable of furthering the presence of the industry globally.

Parani Chitrakorn, a wine educator and consultant from Thailand, says the Chenin Blanc wines tasted at this year’s competition prove South Africa is now the leading producer globally of this variety.

“The flights we tasted – both wooded and unwooded – showed beautiful fruit characters, balance and refreshment,” she says. “There’s a common thread of skilled winemaking and a South African note of elegance and sunshine in the wines. But at the same time the Chenin Blancs show interesting diversity reflecting their respective terroirs. This is definitely one of the best South African categories and can be taken to the world with pride. And they would be great with spicy Thai food from my homeland!”

This year was the fifth time Irish Wine Master Dermot Nolan was a taster at the Michelangelo. He’s convinced Pinotage has a strong role to play in the local industry, not only because it’s a South African variety, but because of the vast improvements in the category.

“Especially in Cape Blends, where Pinotage was harnessed with other varieties, the wines are one of a kind with a world-class feel in terms of texture and elegance,” he says. “But for sheer class and quality South Africa’s Bordeaux blends are simply incredible. They express a taste of place and sophisticated winemaking processes by winemakers with an understanding of each grape used in the blend and a clear vision of the outcome.”

Dutch retailer and consultant René van Hoven was upbeat about the Sauvignon Blanc category, the largest line-up of wines entered. “Sauvignon Blanc is your most widely produced wine and I was fortunate to taste the Michelangelo entries which were brilliant,” he says. “Everybody is talking about New Zealand, and they do make a captivating style of Sauvignon Blanc. But South African Sauvignon Blancs have complexity and depth of flavour with a brighter, fresher structure. With your climate and outdoor lifestyle, I’m not surprised this is such a popular wine here.”

He’s increasingly intrigued by Pinotage. “There are still some clumsy wines out there, but thoughtfully made Pinotage with judicious oaking from regions where the terroir marries the vine – wow! Some awesome wines. Unique, original and in a class of their own.”

Being a retailer, René understands the importance of competitions such as the Michelangelo International Wine & Spirits Awards.

“The general consumer looks at labels and price, and a shiny awards sticker adds the extra touch to make the product that much more attractive,” he says. “This is my second outing to Michelangelo and I’m blown away more than I was the first time. What a great wine competition, worthy as its status as South Africa’s truly international wine event.”