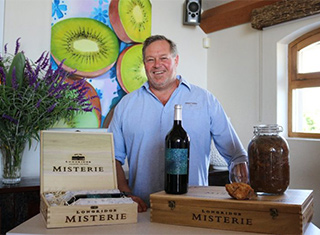 Cellar master Jasper Raats with their brand new release Misterie – the most expensive Merlot to be launched in South Africa.

Longridge Wine Estate set a new benchmark for Merlot production in the South Africa when they introduced their ultra-premium Misterie 2015 earlier this week.  This exclusive addition to the Longridge portfolio will retail at R2000-R2100 per bottle – the most expensive Merlot-based wine ever to be launched in South Africa – with only 3600 of the 2015 vintage bottled.

Cellar master Jasper Raats gathered a distinguished panel of wine experts, including wine critics, sommeliers and restaurateurs to pitch his latest creation against some of the best similar styles and vintages in the world. In a blind tasting, Raats put up their maiden vintage against 2014 vintages of globally recognised wines such as Chateau Trotanoy, Chateau La Fleur-Petrus and a Vieux Chateau Certan – all from the Pomerol region in France – as well as the iconic  2013 Masetto from Tuscany, Italy.
The 2015 Misterie stood up superbly with the majority of the panel rating the wine in the top two running neck-and-neck with the La Fleur-Petrus, retailing at about R4000 per bottle and overshadowing the R9000 per bottle Italian stalwart.  Commenting on the uniqueness    sublime balance and elegance of this ground-breaking Merlot, the panel validated Raats’ belief that their wine can hold its own with the best and most expensive in the world. .
According to Raats, the creation of Misterie has been a long-term vision, that started in all earnest 5 years ago based on the superlative performance of the varietal in the Helderberg’s cooler climate and poor soils on the ridges. Over the past decade Longridge has cemented its reputation for producing high quality Merlot with a succession of accolades, culminating in a Top10 classification in 2017 by Top Wine SA for consistently highly rated vintages from 2007.
“We have invested heavily in our soils and work hard in the vineyards to bring the best fruit to the winery. International wine critics like Tim Atkin and Niel Martin have commented that SA has top wines, but we don’t back ourselves and ask the prices our international competitors do. I believe your wine has to be excellent and you have to do everything well, but you then have to be bold if we want to survive in this industry,” mentioned Raats.
The wine is now available from the Longridge wine shop and www.winecellar.co.za.