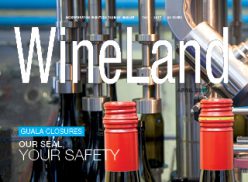 Paging through the 113 issues of WineLand I had the honour of contributing to what was quite an adventure. With this walk down memory lane, I’m ending my chapter at WineLand with a smile and a glass of bubbly.

Much has changed over the past decade – from the who’s who of the spotlight pages to the significant role of social media, ethical certifications, mechanisation, craft beer and developing markets. It’s been a decade of records, renewal, revolution, challenges and change. And a decade of excitement, especially from a journalist’s point of view.

My first by-line was in 2007. It was also the year the total area planted to vines started dipping. I’m not implying I had anything to do with it (at least I hope not!), but it signified a paradigm shift in efficiency, yields, technology, and commodity and bulk wines. Ironically less vineyards didn’t stop the industry from producing its biggest harvests ever and some of the most acclaimed wines in its history.

The times they are indeed a-changin’, but the fundamental topics and industry concerns have in many cases remained the same. The editorial in the month of the first issue I was involved in, is a case in point. Written by former WineLand editor Cassie du Plessis, it was titled “Survival of the fittest”. Hot topics at the time included the proliferation of wine brands, reliance on traditional export markets and the question of who should fund and take responsibility for generic wine marketing in the domestic market. Sound familiar?

One of the last appointments I had at WineLand was with a correspondent from AFP News who wanted an overview of the “state of the industry”. I gave him some of the more pertinent industry statistics, including the declining hectares planted to vines and the fact that only 12% of wine grape producers are realistically profitable.

To balance these depressing stats, I also highlighted the growing domestic market, praise and accolades for top wines and the encouraging increase in value for exports. Significantly, the value of exports of South Africa’s most planted variety, Chenin Blanc, and home-grown variety, Pinotage, were both up by more than 20% last year.

Pondering these figures, the intrigued journo eventually said, “So, it’s basically make or break for the South African wine industry?”

He wasn’t that far off the mark! The past decade has seen an avalanche of accolades and endorsements for South African wine, but a downward spiral for profitability and vineyard plantings. It’s either time to bank the accolades by achieving higher prices and growing market share, or to accept that we’re a declining producer of low-cost value wines.

My dream for the next decade is that South Africa goes from being the next big thing to actually becoming a trendsetting leader of the pack. This is not a battle for the survival of the fittest, but the survival of the smartest – those who adapt wisely to inevitable change. While my days as wine writer and industry commentator are over, I’m eager to be part of this process in my new role as head of strategic marketing at AdVini South Africa.

WineLand plays an enormous role in providing context, opinion and hope to an increasingly complex industry. I enjoyed this job and responsibility immensely and am grateful for the mentorship, support, advice, camaraderie and criticism I received along the way. The new editor, Wanda Augustyn, has been a pillar of strength on this journey and I’m confident she’ll take WineLand Media from strength to strength.