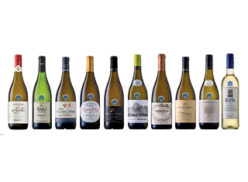 The main aim of this study was to elucidate the sensorial descriptors linked to the Standard Bank Chenin Blanc Challenge 2016’s award-winning wines, as well as some chemical analyses performed on the wines. We also included a few wines that scored the lowest marks at the Chenin Blanc Challenge as references.

Chenin blanc is the most widely planted cultivar in South Africa, with plantings of almost 18 000 ha. Chenin blanc is widely known to produce a wide array of different wine styles. Some of South Africa’s most well-known white wines or white blends are Chenin blanc or Chenin blanc-based. The annual Standard Bank Top 10 Chenin Blanc Challenge awards top South African Chenin blanc wines. In 2016, 124 wines were entered into this competition. During this competition, experienced wine judges score the wines and the wines with the 10 highest scores are awarded. Awards can add value to a brand and it is of interest to wine producers to know the composition of such wines.

The top 10 award-winning wines for 2016 were (in no particular order):

Twenty experienced winemakers participated in a tasting held at the Department of Viticulture and Oenology, Stellenbosch University. The tasting was blind with the winemakers not knowing beforehand that they were tasting award-winning wines. The wines were served in random order and winemakers were asked to supply a few descriptors that best described their sensorial perception of a specific wine.

To obtain a summary of the descriptors used and how often these were used by the winemakers, a process called lemmatisation were used. Lemmatisation consists of counting the frequency of each word for each wine. Once counted, the words with a similar meaning are summed together (e.g. acid, sour and acidity are summed under the group acidity) and then only the groups that were cited at least three times for a wine are considered for further analysis. Therefore, the number of words represents the number of groups cited at least three times for at least one wine. The frequency of citations represents the number of the words multiplied by the number of times this word was cited to describe the specific wine. These two parameters give an idea of the complexity of the wine, with a more complex wine having more descriptors that are cited more often.

The next step in elucidating the sensory characteristics of the wine was to visualise the consensus between the winemakers and what words were more frequently used to describe the wines. For this, word clouds were built based on the frequency of each word used in each wine. Word clouds are easy to interpret. The more often a specific word was used by the panel of tasters, the bigger and bolder it appears in the word cloud. 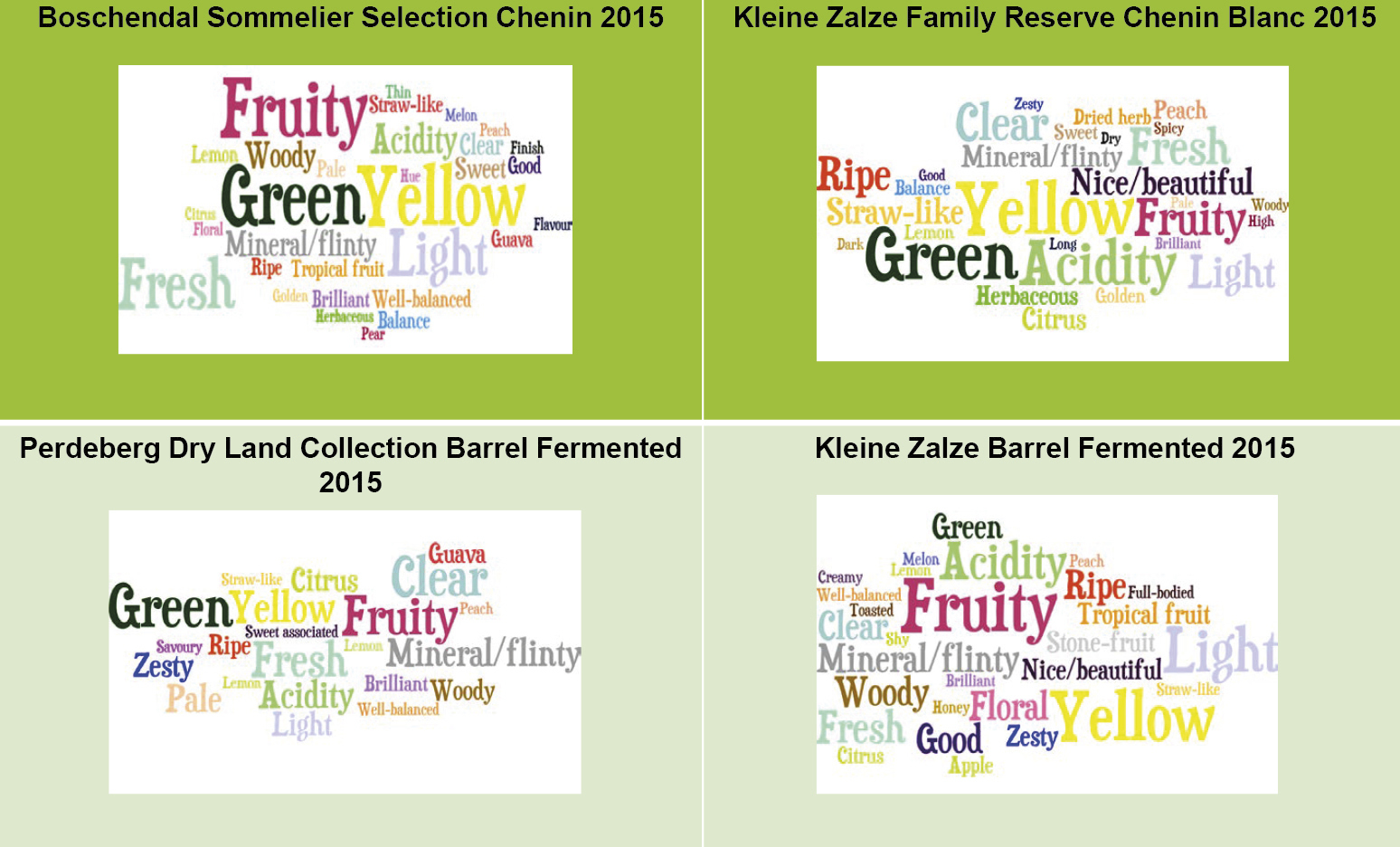 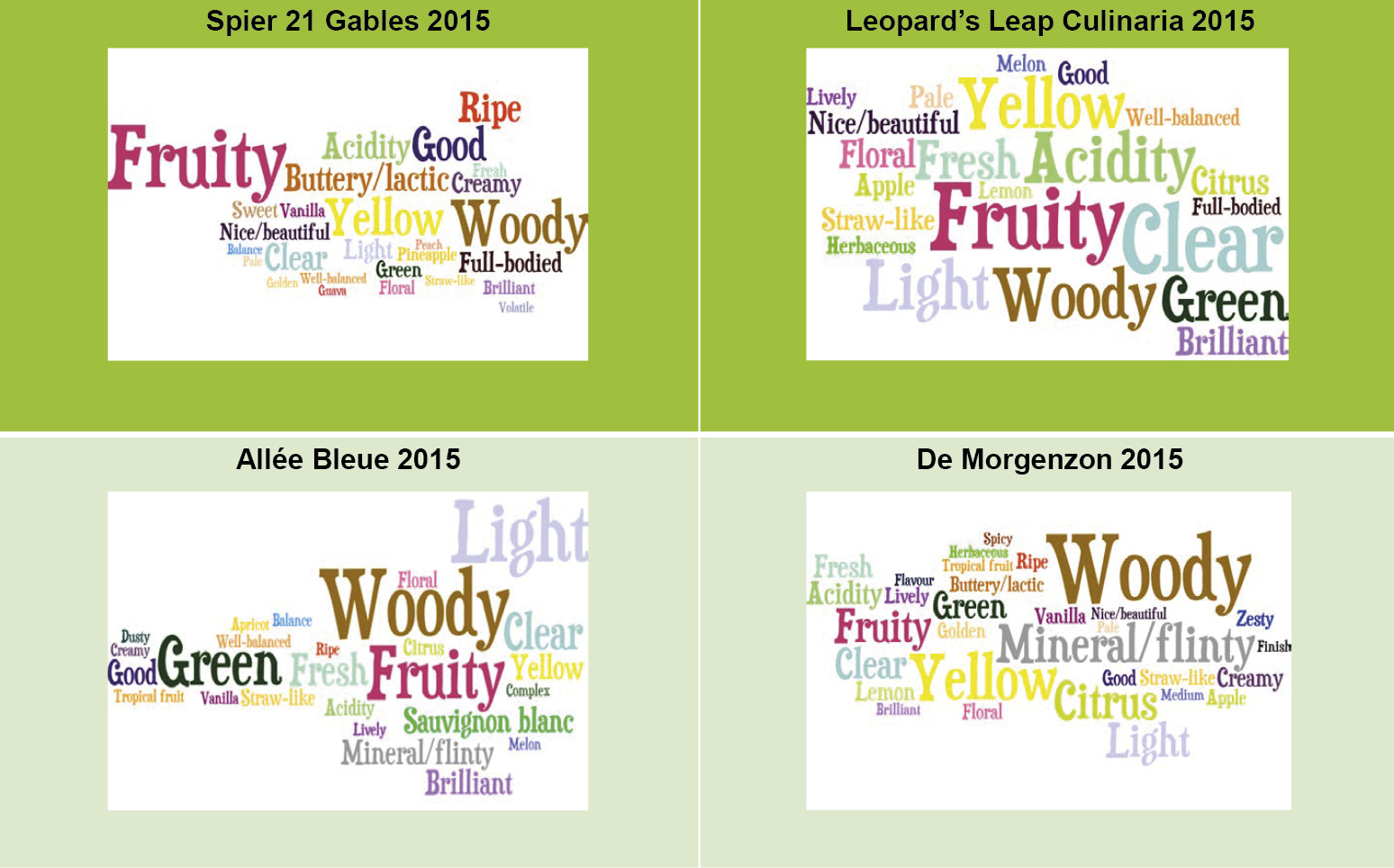 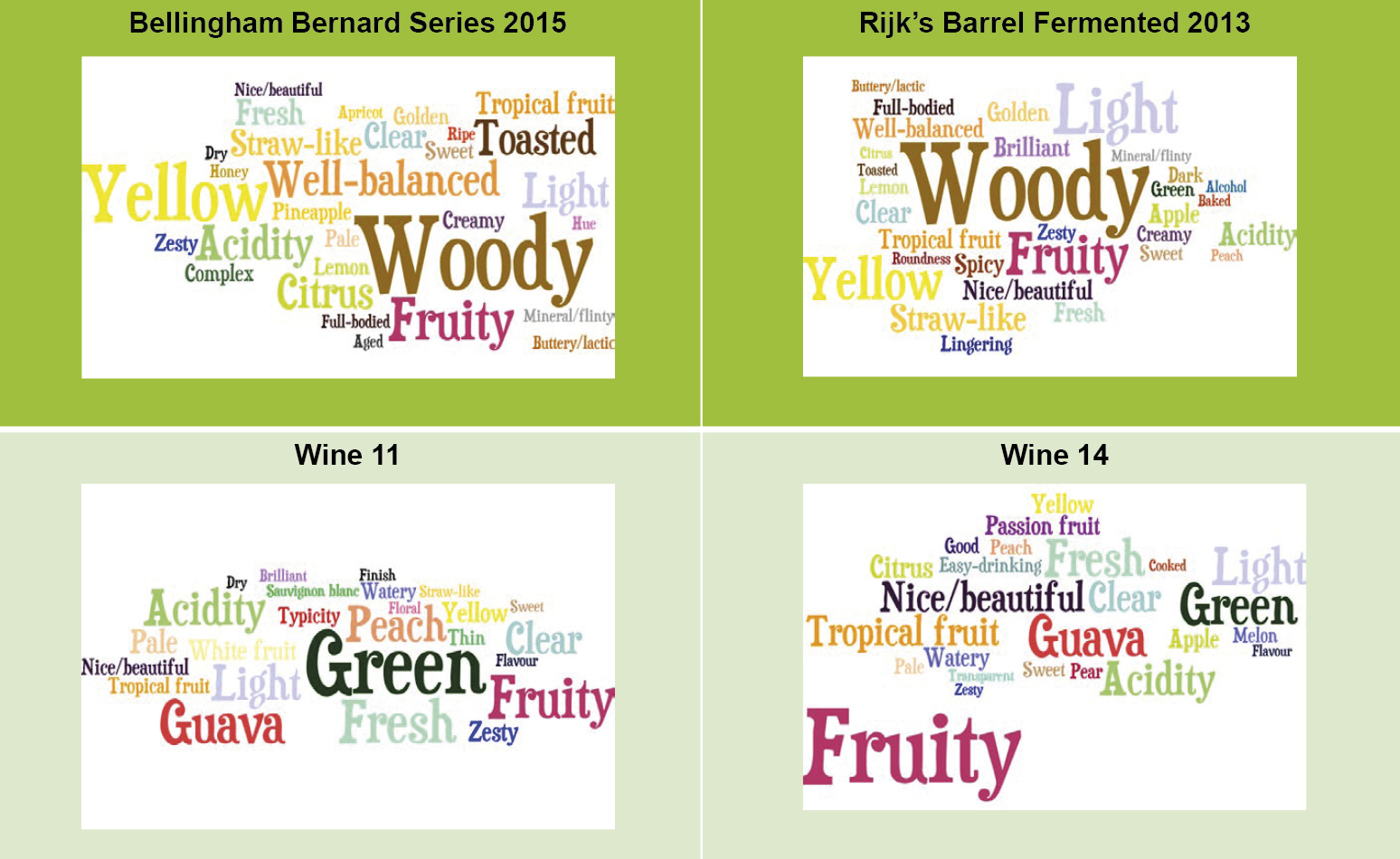 The chemical analyses of these wines can be seen in Table 1. 3MH levels were highest in the Boschendal and Perdeberg wines, while the highest 3MHA levels were observed in the Allée Bleue and Bellingham wines. It should be noted that most of the wines were at least one year old when analysed, which explains the low 3MHA values. Young, fresh and fruity unwooded Chenin blancs display higher 3MHA levels. Chenin blanc wines destined for maturation in wood are generally not produced in a very reductive way as one would do for unwooded Sauvignon blanc that usually contain higher thiol levels.

In terms of the sensory results, the Bellingham Bernard Series, Rijk’s, Allée Bleue and De Morgenzon wines were associated with prominent woody descriptors. The Boschendal, Kleine Zalze Family Reserve, Kleine Zalze Barrel Fermented, Perdeberg, Spier, Leopard’s Leap and Allée Bleue had prominent fruity descriptors. Certain wines, such as the Perdeberg, Kleine Zalze Barrel Fermented and De Morgenzon, also had prominent mineral/flinty descriptors. The Spier wine had a prominent lactic buttery aroma, which might be due to diacetyl from malolactic fermentation. All of these wines had a prominent yellow colour as described by the winemakers. Interestingly the Boschendal, Kleine Zalze Family Reserve and Perdeberg wines also had a “green” descriptor, which might be attributed to volatile thiols.

The winemakers also evaluated a few wines that scored the lowest mark at the Standard Bank Top 10 competition. The word clouds for two of these wines (wines 11 and 14) are also shown. Both these wines had prominent fruity, guava descriptors, which is probably due to high levels of volatile thiols. No wood-derived descriptors were mentioned by the winemakers.

In Table 2, the number of words and the total citations of more frequently used terms are summarised. It is clear that the award-winning wines had more words and total citations than the four wines that scored the lowest marks (wines 11, 12, 13 and 14) at the Standard Bank Top 10 competition. 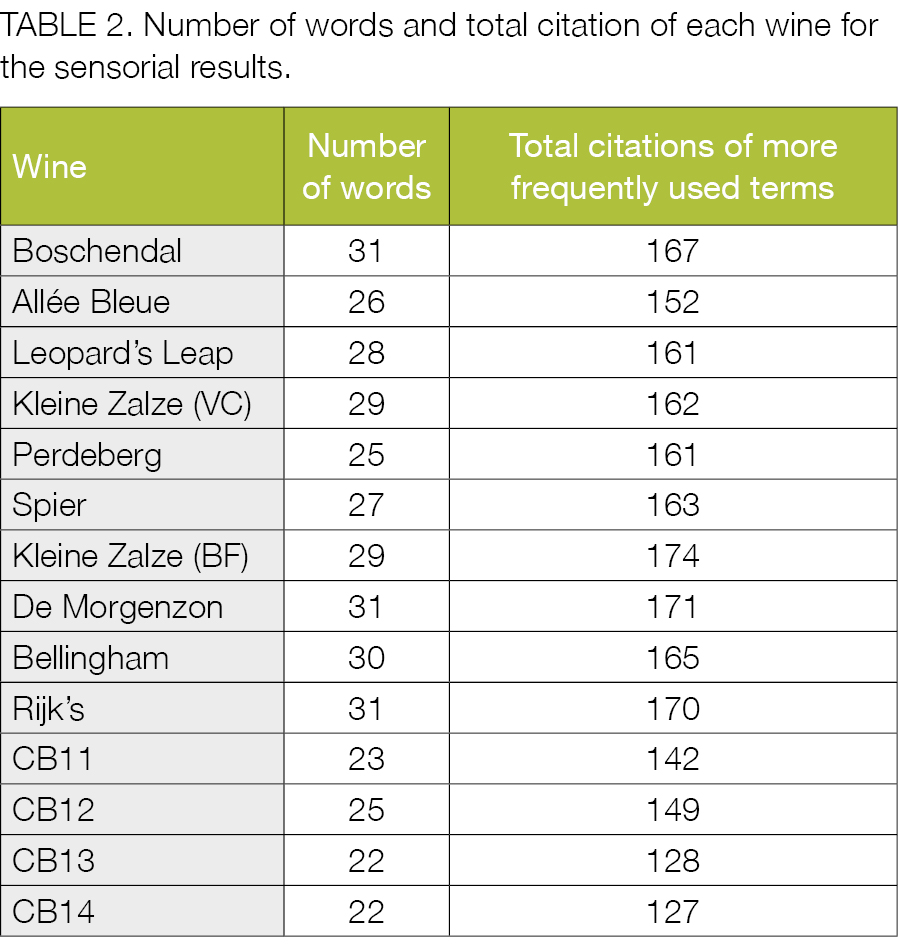 The conclusion can thus be made that the award-winning wines were experienced as more complex. It also seems that the influence of wood played a role in these wines performing well in the competition. However, these wines were not overly wooded and the wood nuances only complemented the wines.

– This work was co-ordinated and performed through the Oenology platform of the IGWS at Stellenbosch University. For more information, contact Wessel du Toit at wdutoit@sun.ac.za.