Climate is considered the most important factor when it comes to the quality of grapes, with a dividing line between “warm” and “cool” climate wines. What exactly do these terms refer to and how do they apply to South African wines? By Johannes Richter 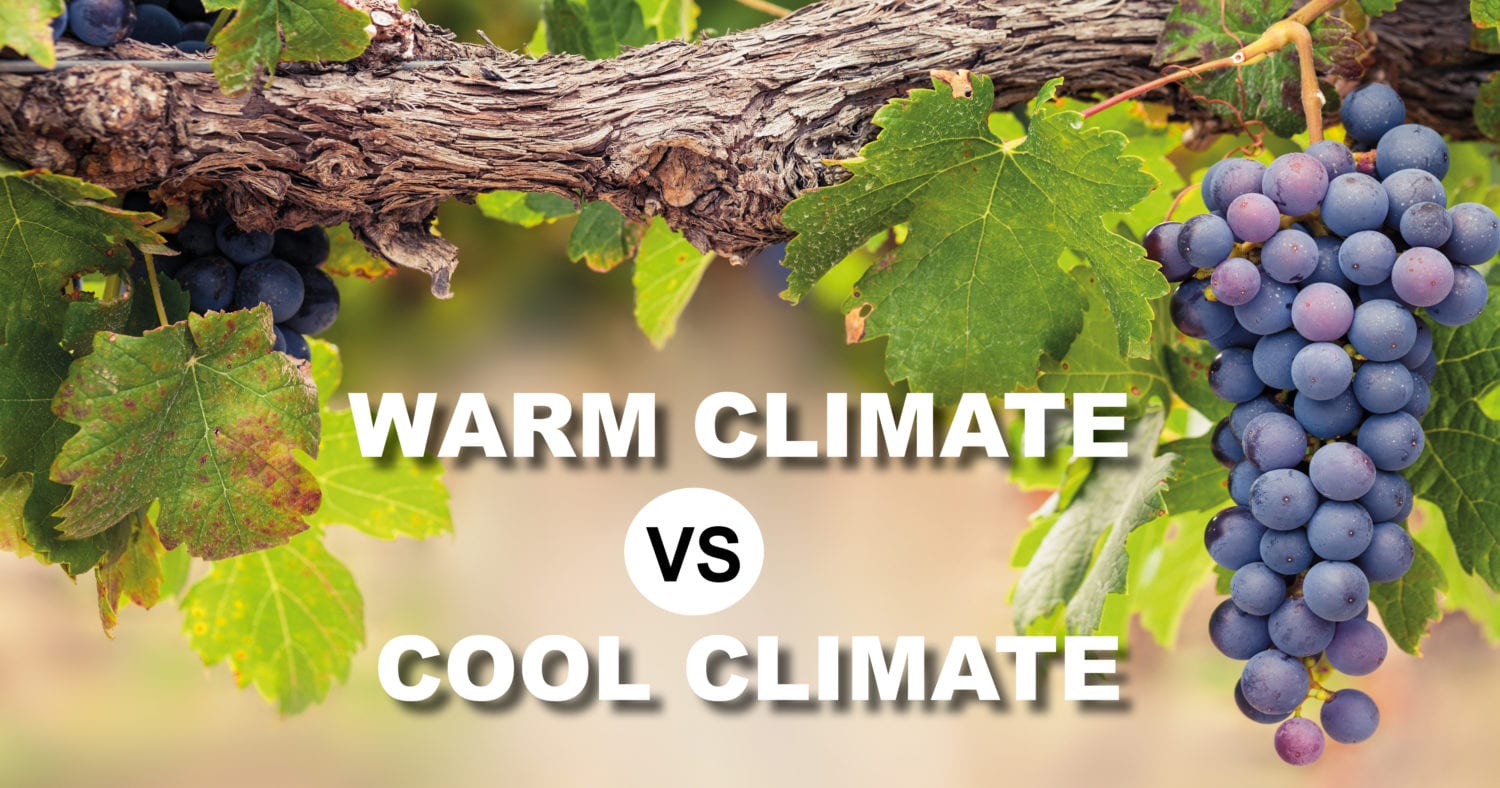 Internationally, cool climates average less than 16.5˚C over the growing season and warm climates are considered to fall between 18.5-21.5˚C, according to Cathy Marston DipWSET of the International Wine Education Centre. Hot climates are above 21.5˚C on average.

Each of these different categories interplay and will impact the quality of wine grapes produced. “Cool and warm climates are generally considered on a macro level,” says Harry. “However, the others need to be considered when determining whether the climate is warm or cool.”

Cathy says knowing the difference helps prepare against weather hazards, determine what grapes to grow and what style of wine is going to be possible in each region. “I think it’s important to realise that there are no genuine ‘cool’ climates in South Africa – it’s not like we have 10 feet of snow every winter! We only have ‘cooler’ ones relative to our overall warm Mediterranean climate.”

“There have been many indices developed to measure whether a climate is cool or warm, based on criteria that impact the growth patterns of the vines,” says Harry, “including mean temperature of warmest month, average growing season temperatures, heat degree days and Winkler heat summation model, among others, which consider the number of days that the average temperature exceeds the threshold of 10˚C – the minimum temperature where grapes will grow.”

Where South Africa fits in

“South Africa has a wide and diverse range of meso- and microclimates in which wine can be produced,” says Harry. “This is because of the close proximity to oceans and water bodies, the different aspects and altitudes of the varied mountain ranges in the Western Cape and the impacts of the different winds on grape production.”

The Benguela current cools down most of the Atlantic seaboard and inland areas such as Cape Point, Constantia, Durbanville, Darling, and Lutzville, explains Cathy. Mountains also have a rain shadowing effect, and microclimates with localised breezes and winds. “Inland areas tend to be hotter but can have a bigger diurnal range which can be useful, for instance Klein Karoo or Mount Sutherland.”

Those areas closest to the ocean are regarded as cooler climates than those regions found further inland, Harry says. “Within the warmer regions you can find cool mesoclimates and vice versa. If, however, we were to use the measures described above, the two coolest wine regions include Elgin and Walker Bay, while the warmer regions will include Stellenbosch, Robertson and Paarl.” 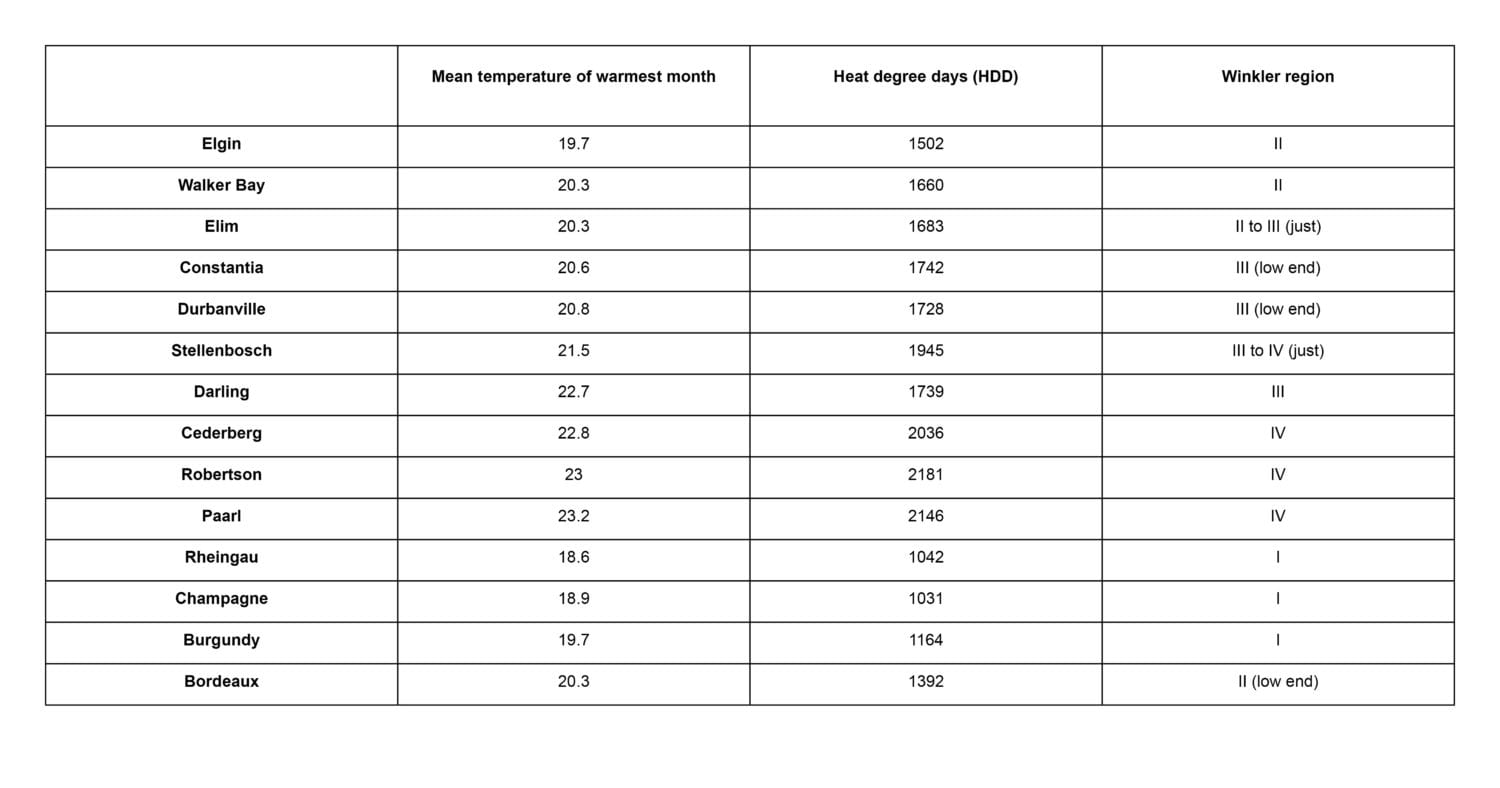 These indices or climate measurements are used around the world to measure the different regions. Wine regions furthest away from the equator will be the coolest. These are largely found in the Northern Hemisphere, especially Germany and France. South Africa doesn’t have any regions in Winkler category 1.

The problems with many of these measures is that they’re based on averages which can be misleading, especially in the Western Cape where there is such a great diversity within the bands defined by these averages. For instance, a region like Cederberg is here considered a warm region, but the styles of wines made there are very cool climate in nature. Broad definitions employing an average measure won’t adequately capture such microclimate variations.

Grapes can be classified as cool climate or warm climate varieties as characterised by their different ripening periods. Different grapes have varying bands in of temperature in which they grow optimally. “Warmer climate varieties are more resistant to heat and drought and are able to maintain high levels of acidity even with the heat and sunlight,” says Harry. “The suitability of a grape to its climate can be manipulated through canopy management and also by the vigour of the soils and the rootstocks used.”

According to Harry, warmer climate varieties include Cabernet Sauvignon, Grenache, and Carignan, while some of our cooler climate grapes include Riesling, Pinot Noir and Chardonnay. Other wines associated with cooler regions in South Africa are MCC, Sauvignon Blanc, increasingly Syrah and possibly even Pinotage, Cathy adds.

“The winemaker is therefore seeking grapes where sugar ripeness and phenolic ripeness coincide. This will have a direct influence on when the grapes are harvested. Also, many of the warmer ‘new world’ climates are able to add acid (acidification) to the wines in winemaking to compensate for lower acidity, whilst many of the cooler ‘old world’ wine regions are able to add sugar (chaptalisation).

“The climate will also have a large impact on the style of wine the wine producer is trying to make. Cooler climate wines are often lighter bodied with more delicate aromas and flavours.”

Climate is the largest influence on the quality of grapes and therefore wine. “This quality translates to wines that are in balance, complex with an intensity of fruit,” says Harry.

According to Cathy, one may expect the following in cool climate wines:

Winemakers can use different harvesting times to give complexity and freshness to their wines, so picking up green notes may not necessarily indicate a cool climate. “You have to consider that in the context of body, alcohol, and acidity as well,” she says.

South Africa’s wine regions comprise a diverse range of meso-, topo- and microclimates that matches its diversity of cultures, languages and stories, making it a natural home for a wide range of varieties. The downside is this makes it difficult to market our wines internationally, since the diversity can be confusing to the rest of the world. But within this diversity, wines are starting to emerge that demonstrate regionality, such as Chardonnay from Hemel-en-Aarde and Cabernet Sauvignon from Stellenbosch. Definitely an exciting time for South African wine.