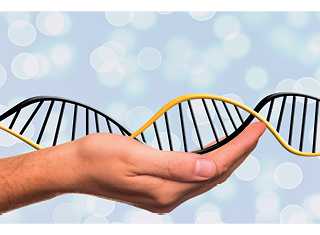 The results obtained showed that pH, ethanol and malic acid play an important role in the expression of the malolactic enzyme gene.

Genes are part of a living organism’s genome and are responsible for specific traits and characteristics. Each gene contains a set of instructions on how to produce a functional product, for example an enzyme. The process by which the information contained within a gene is used to produce this functional product or enzyme is called gene expression. Not every gene product is needed all the time. The organism assess the environment and then reacts on internal and external signals which triggers the expression of certain genes necessary for the development and survival of the organism at that specific moment.

Malolactic fermentation is a very important step in the winemaking process. By the conversion of l-malic acid to l-lactic acid, it contributes to deacidification of the wine, microbial stability, as well as softening, while the aromatic profile is also being influenced. Oenococcus oeni is the lactic acid bacteria mainly associated with malolactic fermentation and is the most favourable species used in malolactic starter cultures. However, the species Lactobacillus plantarum, which is also frequently found in grape must and wine, and effective in completing malolactic fermentation successfully,1 has also now been used in commercial malolactic starter cultures either as a single strain or mixed with O. oeni.

Ideally, O. oeni prefers to grow at a pH of 4.8, in a medium with £10% (v/v) ethanol and at a temperature of 22°C,2 whereas in wine O. oeni is exposed to harsh environmental conditions, including high ethanol concentrations (>12%), low pH (<3.8), sulphur dioxide, low temperatures (<18°C) and limited nutrients. However, it is able to survive this multi-stress environment and therefore the best adapted wine lactic acid bacteria. In order to survive these conditions, O. oeni employs different stress response mechanisms to preserve energy and to defend and protect the cell envelope. The main mechanism of survival is the metabolism of l-malic acid which generates a proton motive force, resulting in the production of energy through ATP synthesis and deacidification of the intracellular pH3 and in the presence of ethanol for example, O. oeni has showed to respond by increasing the fatty acid content in its membrane to regulate membrane fluidity.4,5

FIGURE 1. Relative expression of the mle gene of a Lactobacillus plantarum in the different pH and ethanol fermentation conditions.

In two separate studies the influence of pH, ethanol and malic acid on the expression of the malolactic enzyme gene (mle) from O. oeni and L. plantarum were investigated.6,7 Three O. oeni and two L. plantarum strains were used. The experiments were performed in synthetic wine media and the fermentation conditions included a pH of 3.2 with 0%, 12% and 15% ethanol (v/v) and a pH of 3.8 with 0%, 12% and 15% ethanol (v/v). Gene expression in the L. plantarum strains was also examined in a Riesling wine with a pH of 3.5, 12% ethanol (v/v) and a malic acid concentration of 2.9 g/ℓ.

The results of these two studies showed that pH, ethanol and malic acid concentration certainly effects expression of the mle gene. At the conditions with a lower pH (pH 3.2), mle gene expression was enhanced, while the presence of ethanol had a negative influence on expression. The increase in mle gene expression in an acidic environment could be linked to the survival mechanism of the bacteria to produce energy and regulate the intracellular pH by directing metabolic activity towards the metabolism of malic acid. From these results it seems as if malolactic fermentation would thus benefit from a more acidic environment. However, a balanced pH is certainly necessary as a number of studies have reported on the negative effect of a low pH on the growth and metabolic activity of lactic acid bacteria (reviewed).8 If cell growth is negatively impacted, too little enzyme would be available to completely degrade the available malic acid. Results similar to ours have been reported in a stress response study of O. oeni in a synthetic wine media.9 These researchers also found that an acidic pH (pH 3.5 vs. 5.3) enhanced mle expression.

Wine is a complex undefined media and malolactic fermentation can be influenced by a number of factors (reviewed).8 Our study has shed some light on the influence of malic acid, pH and ethanol on the expression level of the mle gene. For this gene to be most effective in degrading malic acid, our results show that we are in need of enough malic acid (>1.2 g/ℓ) at a pH level which is not too high (pH 3.2 – 3.5) with as little as possible ethanol (<14% v/v). The malic acid concentration and pH of a wine are parameters that are very hard to control and are influenced by several factors, such as grape ripeness, seasonal climatic conditions, cultivar, etc. However, a winemaker can decide when to harvest and therefore somehow control the ethanol level and also decide on doing co-inoculation which has limited impact from an ethanol point.

Co-inoculation is the simultaneous inoculation of alcoholic and malolactic fermentation and provides favourable conditions for the lactic acid bacteria, mainly because of low ethanol concentrations at this stage, as well as the availability of sufficient nutrients. This is a topic that has received much research interest over the past few years and is now implemented frequently by winemakers world-wide. With the less stressful and challenging must environment, co-inoculation paves the way for lactic acid bacteria species other than Oenococcus oeni to be used as malolactic starter cultures.