Marketwatch: Move over to Mozambique 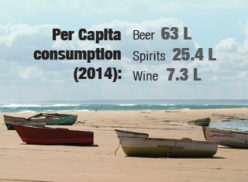 High-alcohol red wines still dominate the market in Mozambique but thanks to education and a rise in aspirational young and middle-aged wine drinkers preferences are changing, presenting huge opportunities for South Africa.

As a former Portuguese colony, Mozambique’s wine landscape is still dominated by cultural influences. The country’s official language is Portuguese and is spoken mostly as a second language by about half the population of close on 26.52 million. Given this strong association with Portugal, red wine is king, with whites and rosé lagging behind although the latter has a growing market thanks to its trendy appeal among consumers.

Total wine imports for Mozambique are dominated by Portugal with 52%, followed by South Africa with 33%, Chile with 11%, and 4% other producers (France, Italy & Spain).

When it comes to sparkling wines, volumes and value are on the increase. South Africa currently dominates this market with 82% of the market share. This presents a huge opportunity for South Africa to position MCC as a top-seller by targeting aspirational middle-class consumers.

men who make up the bulk of the market. There is however a growing number of aspirational young and middle-aged consumers who are interested to know more about wine and on the lookout for quality brands. This, together with these consumers realising the exceptional quality South Africa offers, begs for action.”

Matome says Mozambique is becoming a brand-building market. “This means there’s an opportunity for a brand to position itself to consumers looking for a premium offering. South Africa has a strong position in the informal channel and formal off-trade, and is recognised as good value for money. There’s also opportunity to compete against the Portuguese in the on-trade, an important channel for brand building.”

Another advantage for South African wine producers is the fact that South Africa is an SADC member country, which means it can qualify for a 20% duty waiver when exporting to Mozambique.

South African ambassadors is important. This is where Wosa is making a difference. With the rollout of educational programmes and wine courses targeting the trade and media, Portugal and Chile have already lost a chunk of their market share to South Africa.

“For us as an industry this is a great help to monitor the true volume and value of exports to Mozambique,” Matome says. 