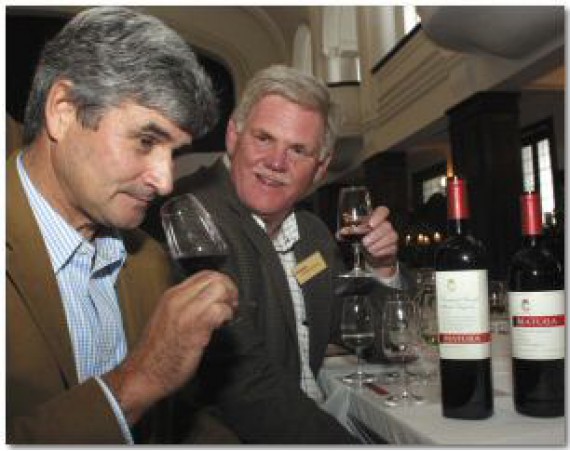 Very few South African wines truly qualify as global players and the industry’s lack of serious contenders in this arena is considered by some to be our Achilles’ heel. JEANINE WARDMAN brings news (and hope) of a new brand intent on making its mighty presence felt on the global wine landscape and creating Cape wine converts the world over.

Matuba, as the new creation has been christened, is the result of the joining of production capacity and marketing savvy involving five of South Africa’s biggest wineries and a group of private investors and marketing specialists. This process was embarked upon 12 months ago with the formation of Cape Coastal Vineyards – the official name for the consolidation between Boland, Wellington, Wamakersvallei, Bovlei and Riebeek Cellars, and Cape Coastal Vintners, the marketing arm of the venture, partly owned by private investors’ group, Strategy Partners.

Matuba’s advent could be considered momentous in the South African context in a number of ways.

There’s no denying the historical lack of intellectual capital on the marketing front of the South African wine industry, especially within the co-operative milieu. Far more significant than volume therefore, is the involvement of Strategy Partners – wholly new to wine, but highly skilled in the building of brands …

And brands our industry needs more of. With the Canadian-owned Kumala bearing a rather lonely South African flag in foreign markets for years now, albeit somewhat supported by Omnia Wines’ Arniston Bay and Westcorp’s Giya, the time is ripe for an authentically South African contender joining their ranks.

The potentially mighty Matuba has its sights set on becoming a truly global player on the international wine scene. In spite of ever-more competitive trading conditions, the brand’s marketers are confident that this is an attainable goal.

Says Johann Pieterse, chairman of Cape Coastal Vintners, “We are familiar with the challenges of establishing a new brand. However, we’ve done our homework. Marketing-wise, we plan to leave no stone unturned. We know that with the right strategy and product there is the potential to establish a global brand from South Africa.”

The man tasked with this colossal undertaking is Francois du Toit, until recently Kumala’s representative on the European continent. After more than a decade abroad, Francois is due back in South Africa later this year. “The prospect of being based closer to the source of the wine is very appealing,” he says.

The Matuba portfolio mirrors the so-called ladder-brand strategies, as employed by Kumala, FirstCape and the like. The range is to consist of three tiers – Premium Select, Vineyard Specific and Barrel Selection – straddling a price range of 5.99 to 10+ and offering consumers a way of trading up as their palates mature.

“We are area-bound,” says Cape Coastal Vintners’ cellarmaster Koos Jordaan, “but that’s great, because we have at our disposal the best possible soil areas for almost every grape variety.”

Jordaan was selected in January this year from close to 40 applicants. Highly regarded in both production and marketing capacities and with a track record including that of winemaking consultant to the Rupert family dynasty’s Historic Wines portfolio and its Leopard’s Leap brand, Jordaan is passionately eloquent about his new role.

“Matuba is the challenge of my career. South Africa needs that one quintessentially indigenous big brand – what Jacob’s Creek is to the Australians.” Jordaan insists that the intellectual capital and business acumen housed within the Strategy Partners group was a major deciding factor in his signing up as Matuba’s qualitative custodian. As was the calibre of winemaking colleagues and peers gathered in the Cape Coastal Vineyards fold. Truly, the credentials of men like Bennie Wannenburg (Wamakersvallei), Altus le Roux (Boland) and Zakkie Bester (Riebeek) need no introduction.

The Matuba series include the Premium Select Chenin Blanc, Shiraz and Cabernet Sauvignon (5.99), Vineyard Specific Sauvignon Blanc, Chardonnay and Shiraz/Viognier (6.99 – 7.99) and ultimately a Barrel Selection range (10+), yet to be released. Jordaan is adamant that varietally, Shiraz is set to be the range’s pièce de rsistance. With the access the brand has to distinguished and time-proven sites in Paarl, Wellington and Swartland, coupled with Riebeek Cellars’ track record in particular, this is an entirely plausible assertion.

With 50-year supply agreements in place between Matuba and Cape Coastal Vineyards, and the added incentive of the latter actually owning a substantial part of the brand and therefore the potential profits, the business model makes sense in a far from clinical sense.

“The relationship is what distinguishes the Matuba venture from all our other supply agreements,” says Johan Truter, manager of Wamakersvallei Winery, and adds that their stake in the brand does not obligate Cape Coastal Vintners to absorb any amount of wine. “Cape Coastal Vintners retain the right to source from outside the group, should the quality not meet their expectations.”

Cape Coastal’s consolidation theme is carried right through the supply chain. Negotiations are well underway with Argentinean and Australian producers with the intention of establishing shared international marketing, sales and distribution infrastructure. “All in an effort to operate more efficiently,” says CN Louw, managing director of Cape Coastal Vintners.

The United States, set to become the world’s largest wine market by 2010, requires specialist knowledge and Cape Coastal Vintners were about to secure a distribution agreement in this regard at the time of going to print. This partnership will effectively give Matuba access to 50 states.

“There’s no sustainable big brand supply from South Africa to the US,” comments Koos Jordaan. “Matuba will break new ground for Brand South Africa in this market.”

But to qualify as authentically South African, Matuba also has a responsibility to wine drinkers on home turf. “We are committed to establishing a firm presence locally,” affirms Johann Pieterse. A local distribution division under the Cape Coastal Vintners banner that will represent a basket of brands, including Matuba, has been put in place. Again, business sense prevails. Says CN Louw, “We will not be investing in delivery trucks and storage capacity, but will rather pool distribution resources with other entities.”

Black Economic Empowerment within the Cape Coastal group is a given. At the time of going to print, the company was in an “advanced” stage of negotiations with a group of black businessmen personally acquainted with Strategy Partners, though new to the wine business. Elaborates Louw, “These are strong individuals – senior businessmen whom we believe will make a valuable contribution to our venture.”

What essentially distinguishes Matuba from its competitors and peers and how is it that the brand, a mere few weeks after its official launch, has become the seat of an industry’s collective aspirations

“Our industry is lacking in creativity and innovation,” a new-generation winemaker acquaintance lamented recently. Perhaps not anymore.

Matuba carries with it the promise, and responsibility, of an industry on the brink of a new era – one of irrevocable structural change, the reinvention of traditional business models and the specialist practising of imaginative marketing.

The Cap Classique Producers Association has re-positioned its marketing objectives to highlight the importance of time in the making... END_OF_DOCUMENT_TOKEN_TO_BE_REPLACED

The South African wine industry acknowledges the greater understanding from government with the announcement of the latest excise duties... END_OF_DOCUMENT_TOKEN_TO_BE_REPLACED

The wine industry body Vinpro recently appointed Dr Langelihle (Langa) Simela to its board to provide strategic insights into... END_OF_DOCUMENT_TOKEN_TO_BE_REPLACED
Go Back
Shares