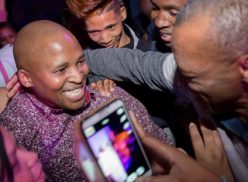 A general agricultural worker from Diemersfontein Wine Estate outside Wellington became the fourth winner of Agri’s got Talent competition when he bowled over judges and won the hearts of fans at the gala event that was held in Paarl on Friday night.

Sikade who earlier in the competition said he could not believe that he made to the top ten, on Friday night said he felt amazing. “I was almost crying when I heard I was in the top ten. It was straight from God.” Sikade faced stiff competition from the ten other finalists in what is described as agriculture’s Idols. The talented Afri-rapper from Panorama Farms in Tulbagh, Jason Baartman, was second and Jason Tiras, also from Diemersfontein Estate, was third.

VinPro Foundation CEO, Unathi Mantshongo, said that agriculture is fortunate to work with multi-talented individuals. “Agri’s got Talent is a platform that celebrates these talents but more importantly for us this project brings people together from all walks of life in support of each other. This theme resonates with what the VinPro Foundation stands for as we are continuously investing in an inclusive industry built on the capabilities of talented people.”

HORTGRO executive director, Anton Rabe, said that he is always at a loss of words when he sees the talented individuals in the agricultural sector. “They get up on stage and sing with confidence as if they have been doing it for years. I get goose bumps every year when I attend Agri’s got Talent. It is with events such as these that we wish to illustrate the multi-dimensional facets and diversity of agriculture – it is clearly not just about products, production and processing, but about people.”

The 2005 South African Idols winner and guest performer Karin Kortje, who was also one of the judges, said to the finalists that if music is in their hearts they must never give up. “I was an apple packer from Grabouw, but I believed that music was my calling. Never give up on your dreams.”  The other judges included musical star Sima Mashazi, actor Maurice Paige and vocal coach Eurica Scholtz.

Agri’s got Talent is the foremost singing competition in the agricultural industry and is a joint project between Hortgro, the VinPro Foundation and the Western Cape Department of Agriculture.