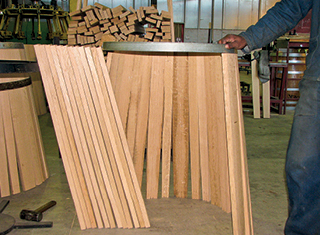 Different factors play a very important role in the character that barrels impart to wine. Irrespective of the wine as such, the wood type, species, grain, origin of the wood and different wood treatments like the drying and toasting method or level play decisive roles. Winemakers are mostly reliant on the information supplied by providers and this information is not always scientific or correct. Bearing in mind the influence and cost of barrels it is desirable that they should execute their own barrel trials.

Research projects or trials are not only the responsibility of academics at universities, but can also be executed by winemakers at cellars. The same project requirements do, however, exist in both cases. The first step is to decide about the aims of the project. The aim should not be the confirmation of a decision that has already been taken, because the conclusions of such results will be biased. The planning must be done according to the below-mentioned rules and it is essential that comparisons or conclusions should always be made in comparison with a control sample.

Science is an interactive process which can be executed in different steps as indicated in the diagram.

FIGURE 1. The different steps of science.

Most cellars make the same mistakes when executing practical trials. The three most prevalent mistakes are the absence of a control sample, a lack of replication and too many experimental variables. The absence of a control causes a meaningless trial, because the result(s) cannot be compared with any existing norms or procedures. Trials must always have replicates, because a single result is not necessarily correct and a conclusion can consequently not be made. More replicates will improve and ensure the conclusions that are made. Experimental variables must be limited in order to determine which variable is responsible for specific results in order to obtain meaningful conclusions.

If the above-mentioned is borne in mind, the following core aspects are essential for barrel trials:

Although barrel trials can be very complex due to the many variables the evaluation of wine style as result of different coopers, toasting and wood origin can easily be determined experimentally. At least six to eight barrels of the control and eight barrels of the specific comparison(s) must, however, be filled for evaluation (Philips, 2017).