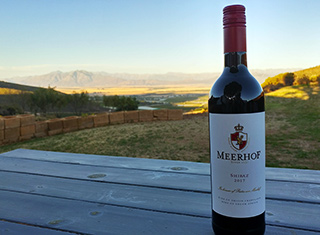 They say the seeds of opportunity are best sown in times of turmoil. Politically, perhaps even economically, the country has taken a more hopeful turn, but nature has not yet released the wine industry from its arid grip. Farmers lean on faith and experience to peer into the future.

After 40 years in the Highveld farming maize and game, Koos van Rensburg and son Erik moved to the Swartland four years ago to cultivate grapes at Rheeboksfontein. It was here they made the acquaintance of winemaker Jaco Brand, and soon a relationship of mutual trust and respect was established. When they were considering acquiring the historic Meerhof last year, the Van Rensburgs relied on Jaco’s lifelong expertise and keen eye for quality before taking the plunge. “The decision came down to Jaco,” Erik says. “Either he was all in, or we were all out.”

For Jaco’s part, he fell in love with the place – not only for its sense of history, but more than anything for its untapped potential. “I just love a good challenge,” Jaco says, brimming with excitement. “The first year was tough, and starting out with a smaller harvest than expected is nerve-racking, but the quality has exceeded my expectations.”

Named in honour of the Danish explorer Pieter van Meerhof, Jan van Riebeeck’s ship surgeon and first to explore the area now known as Riebeek Kasteel, the cellar has a history of highs and lows matching the slopes of the Kasteelberg and the fertile Riebeek Valley beneath – a complex past that is fertile soil for the cultivation of fine wine.

The plan is to ultimately direct all of Rheeboksfontein’s 130 ha harvest to the winery. The new cellar, unveiled at an intimate gathering on Friday 2 March, provides room for up to 400 t of grapes, and the idea is to double its capacity in the next few years.

In the meantime the winery will focus on establishing the Meerhof brand before expanding its vineyards. A new restaurant will open its doors in April, setting the stage for Jaco’s closely guarded treasure: a limited-release premium Cape blend called Krotoa, in honour of the native Khoi woman who was Van Riebeeck’s translator and later Van Meerhof’s wife. With the reunion of their names, Meerhof looks ahead. “We are 100% Fairtrade certified from farm to cellar,” Jaco says. “It’s about the people.”

Jaco and Erik believe conditions are perfect for a new beginning, and Meerhof is poised to deliver.