Melatonin in wine protects your heart 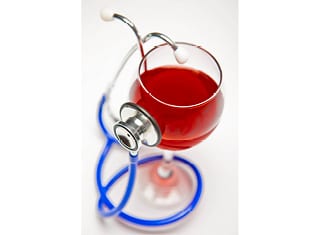 We discuss here how the presence of melatonin in wine may contribute to the cardioprotective health benefit of chronic and moderate consumption of wine.

A bit of history

Wine is the oldest documented human made medicine, with Sumerian’s tablets and papyri from Egypt (as old as 2200 BC) describing medicinal recipes including the use of wine. Hippocrates recommended wine as an antiseptic, a diuretic and a sedative. In the 19th Century, wine lover Louis Pasteur not only demonstrated that yeast was responsible for fermentation to produce alcohol from sugar, but he also praised the health benefit of wine quoting “Wine is the most healthful and most hygienic of all beverages”. Wine helped to eradicate the cholera in Hamburg in 1892. However, the use of wine as a medicine became neglected in the 1920s with the awareness of the harmful effect of excess alcohol consumption and the implementation of the prohibition in the United States. One has to wait until 1992 for Dr. Serge Renaud to revive the interest of wine as a healthy beverage: Interviewed in the US news program called “60 Minutes”, Serge Renaud presented his latest research findings showing low cardiovascular mortality rate in the French population beside a high daily fat consumption. He attributed this French paradox to the regular and moderate consumption of wine, which is characteristic of the French population. Shortly after his mediatic intervention, the sales of red wine in the United States jumped by almost 45% and the American Food and Drug Administration dietary guidelines removed their statement that “wine has no health benefit” to allow moderate consumption of wine with meals.

Numerous population studies have since confirmed the cardiovascular protective effect of chronic and moderate consumption of wine (2 – 3 glasses and 1 – 2 glasses of wine per day for men and women, respectively). However, the exact components found in wine which contribute to this health benefit still remain to be delineated. Ischemic heart disease, commonly referred to as a heart attack, is associated with cellular death of the heart tissue which, function to its extent, will compromise the pumping activity (cardiac function) of the heart. With the vision to better understand the cardiovascular benefits of chronic and moderate consumption of wine, we have established a preclinical model mimicking a heart attack by using an isolated heart model in rats that were pre-treated with wine at a dose equivalent to 2 – 3 glasses of wine per day in humans. In this model, we compared the cardiovascular protective effect of a red wine with 12% alcohol before and after alcohol removal to 6%, using the reverse osmosis technique. To our surprise, the wine with 6% alcohol offered as much cardiovascular protection as the 12% wine, both wines increasing the cardiac function by approximately 60% compared to a pre-treatment with water only. Our data therefore strongly suggest that alcohol in wine may not be the primary component contributing to the cardiovascular benefit of wine.

Melatonin (N-acetyl-5-methoxytryptamine) is another component in wine that has attracted attention in the past few years. This hormone, produced in both humans and plants, is well known for its role in the regulation of our sleeping pattern. Synthetised mainly in the brain at night, it triggers our sleep by modulation of the physiological circadian clock. In plants, the physiological functions of melatonin still remain to be understood. As a strong antioxidant, the presence of melatonin in plants seems to protect it from stressful situations, such as drought, temperature changes or UV radiations. It is also suggested that melatonin may be key to enhance the development stage of the plant and the photosynthesis process.

Melatonin in wine was discovered in 2006 in both red and white wines, with melatonin levels reported to be highest in red wines, ranging from 2 pg/mL – 500 pg/mL. In South African wines, similar levels of melatonin have been reported with a maximal concentration found in Pinotage (unpublished data). The concentration of melatonin is largely dependent on the type of grapes and the winemaking process. The type of soil, the climate and the different field treatments of the grape vines (such as benzothiadiazole) can largely increase the levels of melatonin in the skins of vine grapes, although most of melatonin’s production seems to occur during the fermentation process. 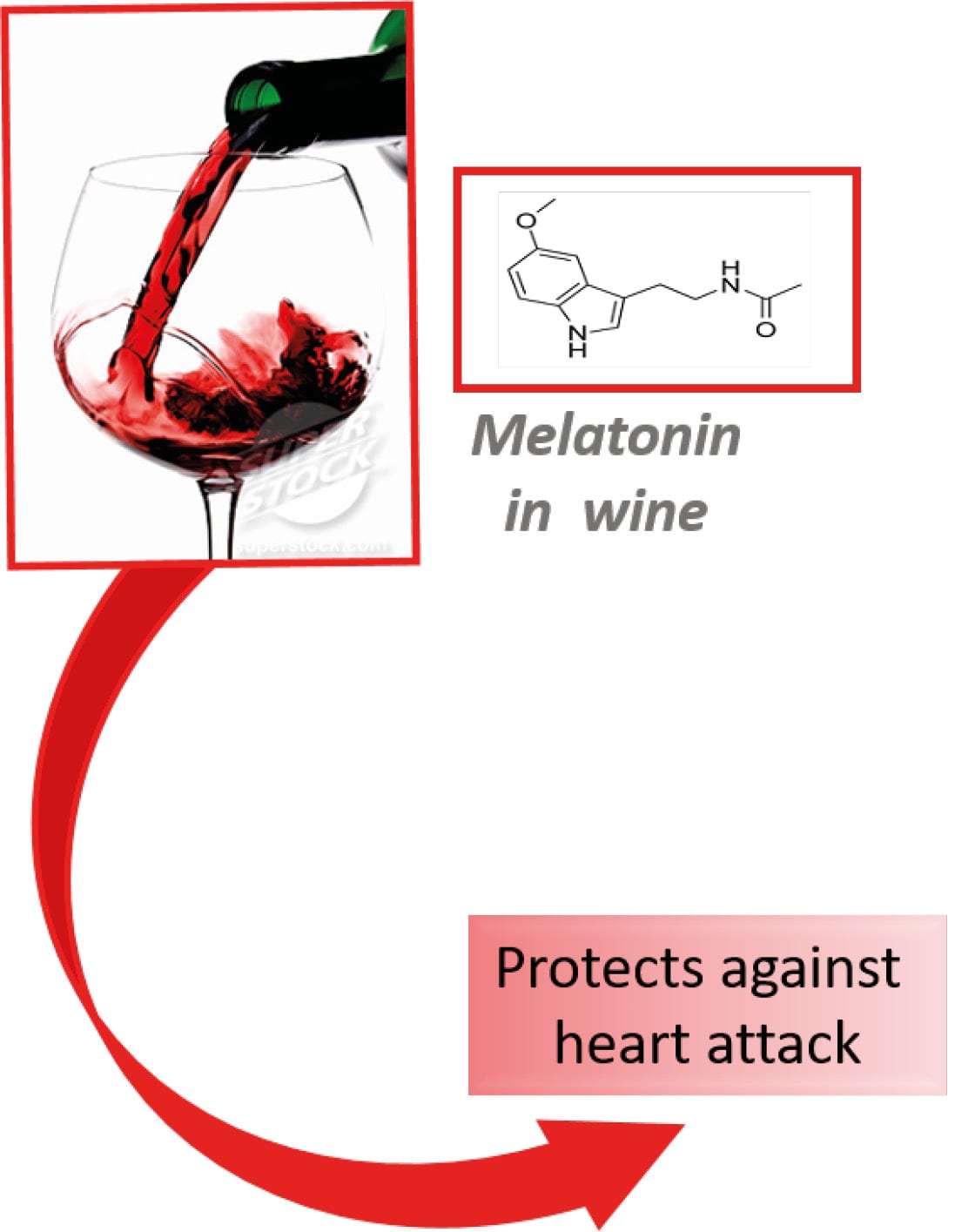 At the Hatter Institute, we have been able to demonstrate that the presence of melatonin in wine contributes to the cardioprotective effect of regular and moderate consumption of wine. Indeed, a chronic treatment of melatonin, given at the concentration equivalent to the concentration found in 2 – 3 glasses of red wine, was able to protect against the cellular damage observed in a simulated heart attack model. Melatonin is a strong antioxidant and it exerts most of its physiological function via melatonin receptors. When a chronic and moderate treatment of wine was given together with an inhibitor of the melatonin receptors, the cardiovascular benefit of wine was largely attenuated, therefore suggesting that melatonin in wine plays a key role for cardioprotection (above).

Recently, the presence of melatonin isomers has been discovered in wine at concentrations even higher than melatonin itself. In partnership with our colleagues in Italy (who have been able to isolate these melatonin isomers), we are currently exploring whether these isomers may present any health benefits for wine drinkers.

The presence of melatonin in the vine and in wine may present benefits to grow a healthy vine, to improve the quality of the wine and to protect the heart of wine drinkers. Although melatonin is known to have very little side effects, its interaction with the other thousand components in wine, including with the different melatonin isomers, still remains to be understood.

Numerous population studies suggest the health benefit of chronic and moderate consumption of wine. Wine contains over a thousand different components and the exact components that may contribute to its health benefit still remain unclear.

Research conducted at the Hatter Institute on the delineation of cardioprotective components found in wine is supported by Winetech (UCT SL 12-01).