A method of choice for the evaluation of infection of grapevines

RT-PCR, combined with SSCP analysis of amplicons, is a method of choice for a brief evaluation of the complexity of virus infection of grapevines in a standard laboratory.

Grapevine leafroll (GLR) and rugose wood (RW) are the most widely spread diseases of grapevines in vineyards worldwide (Naidu et al., 2014; Minafra, 2000). The diseases are easily transmitted between plants by common vineyards pests like mealybug and scale insects. GLR disease is of great concern to grapevine industries, because it delays maturation, and decreases the sugar content of berries, which negatively influences the quality of produced wine. RW diseases cause abnormal differentiation of cambium cells to xylem and phloem tissue, which leads to various externally visible modifications of the grapevine trunk. The RW diseases affect graft takes and are responsible for reduced vigour of grapevines, which ultimately results in lower productivity and longevity of vineyards.

After many years of investigations of the aetiologies of GLR and RW, it is a widely accepted conclusion that viruses of the families Closteroviridae and Betaflexiviridae, respectively, are causing these diseases. The investigation is still ongoing since these families are composed of many virus species infecting grapevines (Table 1), and every one of them shows high genetic heterogeneity. The study is difficult, since GLR- and RW-affected grapevines are usually infected with a mixture of virus species, and genetic variants of viruses (Table 2). RT-nested PCR amplifications of viruses using degenerate, Closteroviridae- and Betaflexiviridae-specific oligonucleotide primers, and analysis of the amplicons using a single strand conformation polymorphism (SSCP) technique is the method of choice for a brief estimation of the complexity of virus infections of grapevines.

* Ampeloviruses of subgroup 2, according to recent molecular analysis, should be regarded as divergent genetic variants of the first discovered Ampelovirus, GLRaV-4 (Martelli et al., 2012).

TABLE 2. Viruses associated with grapevine leafroll (GLR) and rugose wood (RW), which were detected in various grapevines affected by these diseases. 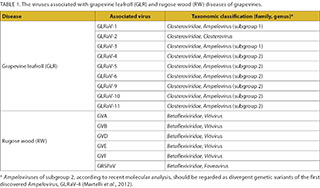 * Refers only to viruses associated with the diseases specified in this table.

Degenerate primers for the specific and simultaneous RT-nested PCR amplifications of members of these two virus families associated with GLR and RW diseases were designed using the amino acid sequence data of conserved (the same or very similar for different virus-species of a family) stretches of the sequences of virus-encoded proteins (Dovas & Katis, 2003; Maliogka et al., 2008). SSCP technique utilises the phenomenon of different migration of single strands of DNA in polyacrylamide gels, which depends on the nucleotide sequence of the strands (Orita et al., 1989). To separate DNA strands, a very easy to prepare reagent is added to a sample of a PCR amplicon, followed by incubation of the mixture at 99°C for 10 minutes, and electrophoresis in polyacrylamide gels for one hour at 200V. Results of the analysis of virus infection of various LR- and RW-affected grapevines using this method are shown in Figure 1. 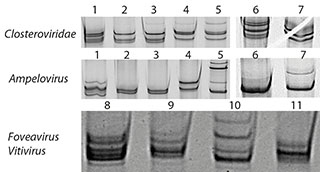 FIGURE 1. Results of SSCP analysis of amplicons generated in RT-nested PCR based on degenerate primers specific to viruses of the family Closteroviridae and genuses Ampelovirus, Foveavirus and Vitivirus. Numbers 1 – 11 refer to grapevines shown in Table 2.

The author thanks Winetech for partially funding this study.

Dovas, C.I., Katis, N.I., 2003. A spot nested RT-PCR method for the simultaneous detection of members of the Vitivirus and Foveavirus genera in grapevine. Journal of Virological Methods 109, 217 – 226.

Martelli G.P. et al., 2012. Taxonomic revision of the family Closteroviridae with special reference to the grapevine leafroll-associated members of the genus Ampelovirus and the putative species unassigned to the family. Journal of Plant Pathology 94, 7 – 19.