From small baby steps to one of the most recognisable competitions in South Africa, the Michelangelo International Wine & Spirits Awards this year celebrated 20 years of wine excellence. 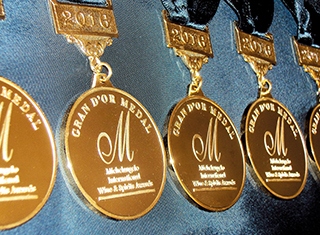 It’s been a long time since well-known wine personalities Danie Steytler and André van Rensburg received their first-ever trophies at the inaugural Michelangelo International Wine & Spirits Awards in 1997, but seeing them back on the podium 20 years later, reaffirms the high standing of this competition.

Owned by feisty Lorraine Immelman, an industrial journalist by training with years of PR experience and Namibian by heart and birth, the competition was run from Johannesburg for six years before it was moved to the Cape. The move made sense as it brought her closer to her business core in the heart of the Cape winelands.

In the first year of the competition Lorraine received 146 entries. Her hard work and perseverance paid off because this year she celebrated the 20th anniversary of the competition with a record 1 829 local and international entries.

A total of 670 medals were awarded at this year’s competition: 18 platinum, 113 Grand’Or, 271 gold and 253 silver. An exciting development this year has been the number of Champagne and sparkling wine entries they received, Lorraine says. For the first time there were several Champagne entries from France and Prosecco entries from Italy. With a total of 91 sparkling wine entries, this category showed an increase of nearly 30% compared to last years’ entries.

There was also a marked increase in the number of foreign entries this year with 120 wines and spirits entered by producers from Australia, Italy, France, the Czech Republic, Lebanon, Chile, Moravia, China, Croatia, Slovakia and Slovenia.

“Compared to last year this year’s competition grew by 9% to a new record number of 1 829 entries submitted by 296 local and 42 foreign producers,” Lorraine says. “This is the culmination of 20 years of extremely hard work and makes Michelangelo the biggest wine competition in South Africa.”

Lorraine says this achievement wouldn’t have been possible without the support and dedication of her two-woman team, Mariëtte de Beer and Christine Rudman. This year they put a different spin on the competition as they realised that to stay relevant and sustainable a holistic approach was needed. So they looked at the sum of the parts and focused on each part instead of only the financial gains, glitz and glam.

When selecting judges, Lorraine and her team make sure only the best international judges taste and score the wines. “By employing internationally respected and highly experienced judges and abiding by the highest international technical standards, the Michelangelo has become a global player on the world map of wine and spirit awards,” she says proudly.

“We choose the cream of the crop when it comes to our judges,” Lorraine says. “They are people with integrity and qualifications, but also people who don’t stand to benefit by judging at this competition. Michelangelo’s results are accordingly unpredictable and frequently there are huge revelations as small or new wineries get recognition alongside their larger and better-known peers.”

What’s in it for consumers?

During the years of running the competition, the biggest question always is: How do we reach wine-lovers?

“I would like the Michelangelo International Wine & Spirits Awards to become a household name,” Lorraine says. “People who love and enjoy wine should understand what it means when they buy a wine with a Michelangelo sticker on the bottle. They must recognise that this bottle of wine was tasted by a panel of international and local experts. It won a medal and that means the wine speaks of knowledge, background, skill and internationalism.”

Lorraine knows that partnering with the right organisations means more exposure and added value for producers and their wines.

“It remains the aim of Michelangelo to add value to the medals which our winners receive, and to this end we have signed a three-way agreement with Tamasa Wine Trading and Media Nova Publishing to host prestigious wine shows at selected international venues. At these glittering events only the crème de la crème of the Michelangelo winners will be on show, namely the trophy, platinum and Grand’Or medal winners.

“In addition we have entered into an agreement with Fiera Milano, owners and organisers of The Good Food & Wine Show to host a Michelangelo Pavilion at every show, where our winners will have the opportunity to offer their wines and spirits for tasting and for sale to the public.”

Once the dust has settled, Michelangelo stickers are put onto the winning wines’ bottles that fill the shelves. And then it’s back to the drawing board for Lorraine and her team. They discuss what worked and what didn’t at the competition before launching straight into planning the next one.

Lorraine, a huge animal-lover who regularly fosters and adopts homeless dogs, donates any wines left over after the competition to various animal welfare institutions who use the wines for fundraising. “It’s a win-win situation for everyone,” she says jokingly.

Despite the records set at this year’s competition, Lorraine feels they will only have achieved their goal when people out there not only know about the Michelangelo International Wine & Spirits Awards, but also what they represent. “Only then will we talk success,” she says.