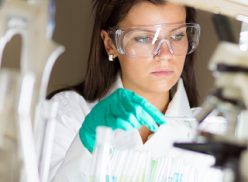 A prominent goal in global wine research is the reduction of ethanol levels in wine, without the use of physical alcohol removal methods such as spinning cone columns and reverse osmosis (Howley & Young, 1992; Pickering, 2000). This research is motivated by a confluence of social, economic and environmental factors: On the one hand, many styles of wine that are popular in the global market require grapes to be fully ripe at harvest. Desirable levels of ripeness are frequently linked to high sugar concentrations in the grapes, which invariably, all other factors being equal, lead to higher final ethanol concentration in the wine. On the other hand, while achieving desired stylistic outcome, such high alcohol levels may negatively affect the taste and balance of the wine (Guth & Sies, 2002). From a health perspective, high ethanol levels add to concerns related to alcohol addiction and illnesses. Finally, many countries tax wine based on the percentage of alcohol creating a strong commercial incentive to decrease ethanol levels (Heux et al., 2006).

While pre- and post-fermentation processes have been considered in low ethanol research, a growing body of international research is targeting microbial technology in an attempt to alter fermentative ethanol production. Microbial strategies present an attractive opportunity to decrease ethanol levels while preserving the quality and aromatic integrity of the wine. One aspect of this research relates to yeast strain development through breeding or genetic engineering: The principle behind these approaches is the engineering of yeast strains through altered gene expression to modify carbon fluxes in the cell. One of the key target carbon sinks in these approaches has been glycerol, as several research groups have attempted to re-direct carbon towards glycerol in order to decrease the flow of carbon to ethanol. (Remize et al., 1999; Lopes et al., 2000). These approaches have seen some success in terms of decreasing the ethanol concentration in wine, but off-flavours, such as acetic acid and butanediol, are often produced. Rossouw et al. (2013) demonstrated that an alternative metabolite in central carbon metabolism, trehalose (a disaccharide made from two molecules of glucose), can be targeted as a carbon sink without resulting in the accumulation of undesirable redox-linked metabolites (Rossouw et al., 2013).

A second microbial strategy that has seen growing interest in the last decade involves the use of non-Saccharomyces yeasts in co-fermentation with conventional S. cerevisiae wine yeast strains. S. cerevisiae wine yeast strains have been selected for fermentation efficacy, and as such their primary fermentation kinetics (in particular ethanol yields) fall within a very narrow range. While finding S. cerevisiae strains showing lower than usual ethanol yields is thus not likely, this avenue can be pursued for non-conventional wine-associated yeasts where ethanol yields have been found to vary widely (Contreras et al., 2014; Rossouw et al., 2015). Several studies have reported lower ethanol yields when using non-Saccharomyces yeasts, however, the decreased ethanol production was often linked to high residual sugar levels in these wines (Ciani et al., 2006; Magyar & Toth, 2011). Recent studies have highlighted the diversity of the South African vineyard microbial landscape (Setati et al., 2012), providing the opportunity to access novel species and strains in the context of ethanol research.

Impact of yeast strain and environmental parameters on ethanol yields

Varying key environmental and fermentation parameters, such as must nitrogen content, pH and fermentation temperature, has been shown to significantly impact the production of key yeast metabolites such as glycerol (Rankine & Bridson, 1971; Torija et al., 2003). If glycerol production can be manipulated through environmental factors, and given that glycerol and ethanol production by yeast are often inversely correlated, ethanol production could likewise be manipulated. We therefore undertook to determine which fermentation factors (alone or in combination) could influence the production of ethanol. This systematic approach comprehensively investigated the effects of various combinations of pH, temperature and nitrogen settings on the ethanol yields produced by 15 commercial wine yeast strains. These experimental factors were selected as they can in principle be controlled by the winemaker, thus making implementation practical, cost-effective and user-friendly if successful. However, the data indicate that there are no statistically significant differences in ethanol yields between strains, or between different conditions. Selected examples from a much broader dataset are shown in Figure 1 and 2 to highlight the similarity in ethanol yields across a range of conditions and for different strains. 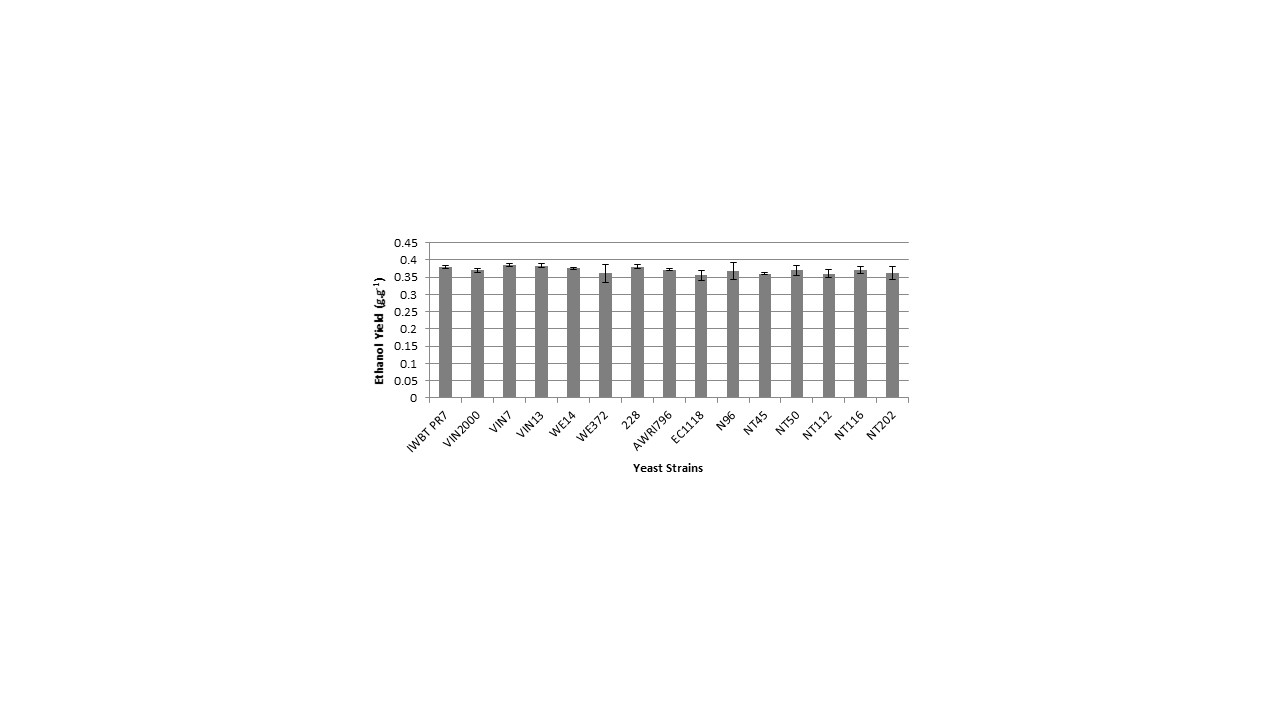 FIGURE 1. Ethanol yield (grams of ethanol produced per gram of sugar consumed) of 15 industrial wine strains in synthetic grape must, fermented at 20°C. 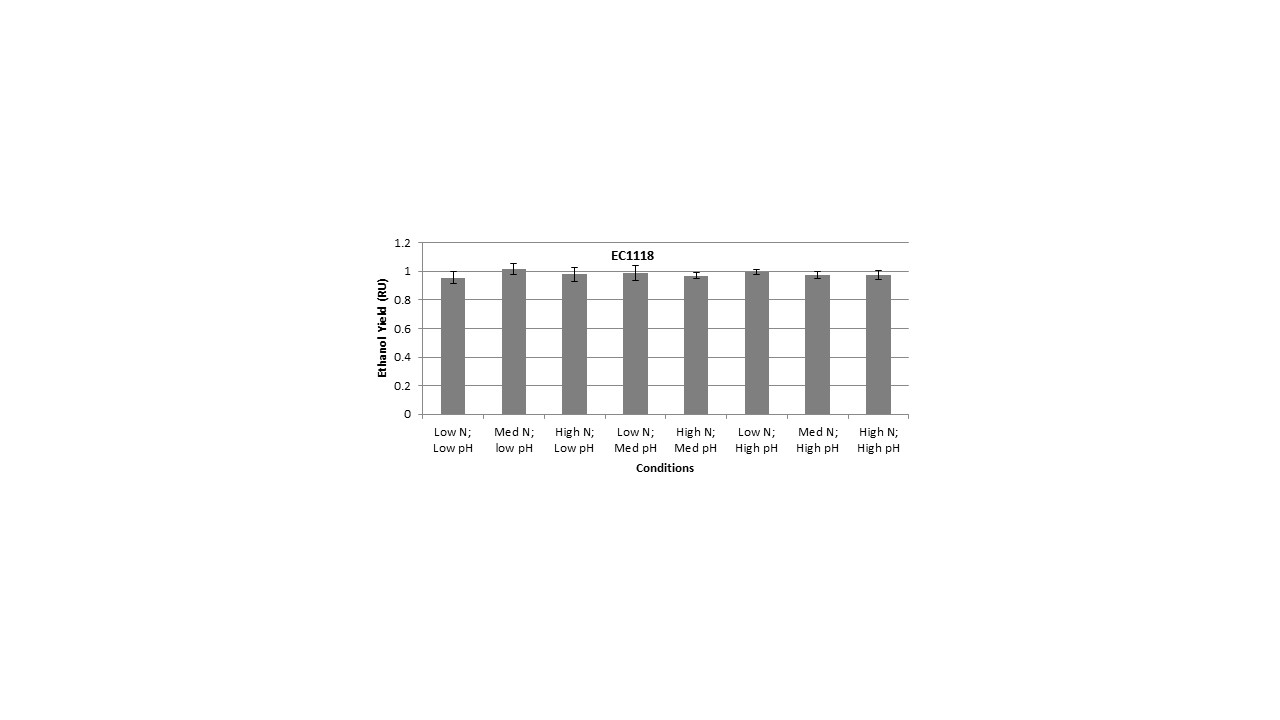 FIGURE 2. Ethanol yield in relative units (RU) of strain EC1118 under various combinations of different pH and YAN concentrations. Fermentations were performed at 20°C. Ethanol yields were calculated relative to a reference must (which is set to 1). All values are the average of three repeats +/- standard deviation.

As fermentation management practices and wine yeast strain selection prove to be untenable practices for wine ethanol reduction, attention shifted to the modification of existing commercial wine yeast strains to adjust their ethanol production. Previous studies have shown the potential for metabolic engineering in directing carbon to alternative end products apart from ethanol (such as glycerol). Trehalose presents another option for carbon flux engineering, as this compound serves as a neutral storage sugar in yeast with no impact on wine sensory properties (Rossouw et al., 2013). A key enzyme in the synthesis of trehalose is Trehalose-phosphate-synthase1 (TPS1), which catalyses the first step in trehalose biosynthesis by converting UDP-glucose and glucose-6-phosphate to trehalose-6-phosphate (Francois & Parrou, 2001).

TPS1 was thus selected for over-expression in an industrial yeast genetic background. For this purpose, two different promoters were selected to drive expression of the TPS1 gene at different times during fermentation; the first during the early stage of fermentation (up to 50% sugar consumption) and the second during the latter half of fermentation. The data show that this strategy of increasing TPS1 gene expression was successful as the modified strains showed higher trehalose accumulation and significantly lower ethanol yields than the corresponding control strain. This implies that a percentage of the carbon from the initial must sugars was directed to increased trehalose accumulation at the expense of ethanol (Figure 3). While the use of genetically modified wine yeast strains is not currently accepted in the industry, the data provides the first example of a successful commercial wine yeast engineering strategy targeting trehalose as a means for lowering ethanol levels. The significant decrease in ethanol in these fermentations were not associated with any of the usual pitfalls related to stuck fermentations or high residual sugar levels (Rossouw et al., 2013). The data suggest that targeting trehalose metabolism specifically as part of a breeding and selection strategy is an option for generating non-GM wine yeast strains with lower ethanol yields in future. 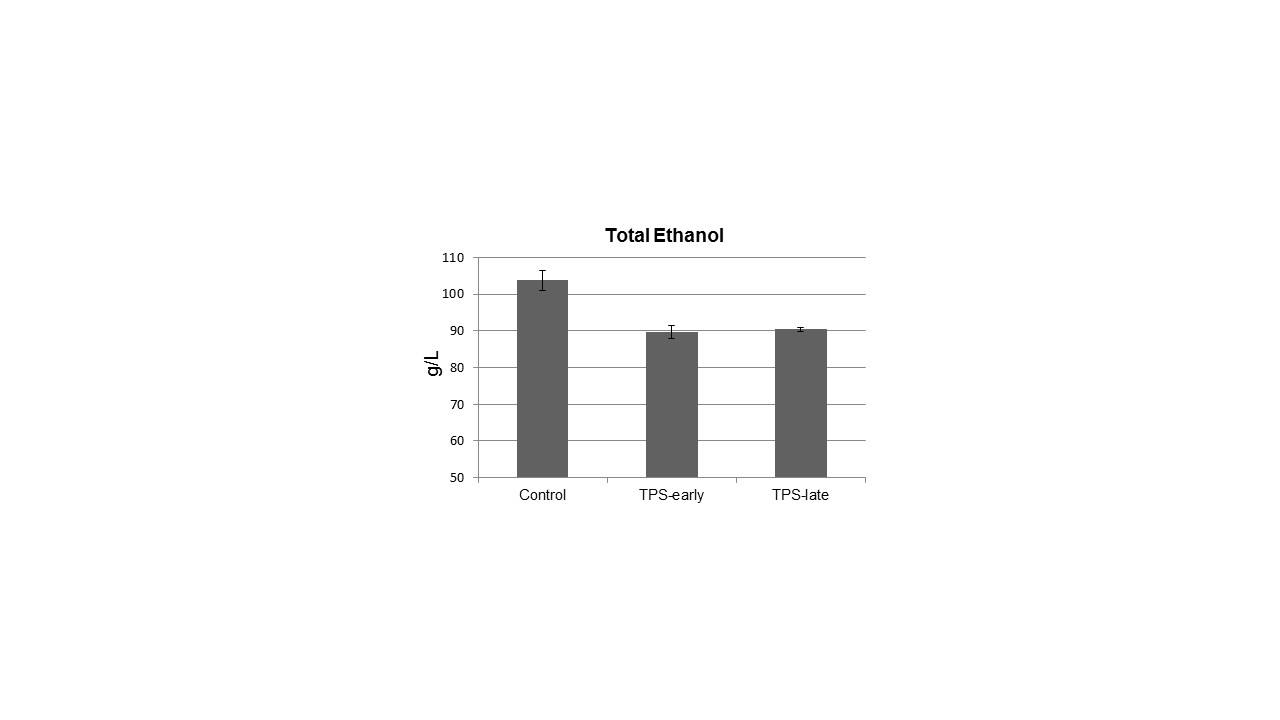 FIGURE 3. Final ethanol concentrations in grams per litre (g/ℓ) in fermentations conducted by a commercial strain (control) and the same strain modified for increased expression of the trehalose phosphate synthase gene at the two different fermentative stages (TPS-early and TPS-late). All values are the average of three repeats +/- standard deviation.

The strain collection of the Institute for Wine Biotechnology (IWBT) contains grape and vineyard isolates of both Saccharomyces and non-Saccharomyces yeasts isolated over numerous years from various locations across the South African winelands, some of which have been described previously (Setati et al., 2012). A large set comprising of 86 non-Saccharomyces yeast isolates from this collection were selected across a wide range of genus and species groups to determine their sugar utilisation abilities, as well as ethanol production. Many of these isolates represent species and genera that have previously not been considered for their possible contribution to winemaking, but which appear highly represented in sampling from local South African vineyards.

The results from fermentations conducted with these 86 strains in synthetic grape must indicated that 23 strains showed significant sugar utilisation, as well as reduced ethanol yields (the amount of ethanol produced per gram of sugar utilised) compared to commercial wine yeast strains. These isolates were characterised in detail with regard to the production of higher alcohols, esters and monoterpenes. Based on these outcomes four strains were further selected for winemaking trials in both red and white grape musts (Pinotage and Sauvignon blanc) in a sequential inoculation strategy with the wine yeast VIN13.

In the Sauvignon blanc fermentations, all non-Saccharomyces treatments appeared to have a greater impact on ethanol levels compared to the Pinotage fermentations. In the Pinotage fermentations, the greatest reduction in final ethanol concentrations (%) was observed for H. uvarum, followed by H. opuntiae (0.8 and 0.6% respectively; Figure 4A). In the Sauvignon blanc, these strains again led to the lowest final ethanol concentrations, with a reduction of up to 1.3% compared to the control (Figure 4B). Concentrations of most higher alcohols and esters quantified in the finished treatment wines were also significantly different from one another and/or the control wine. 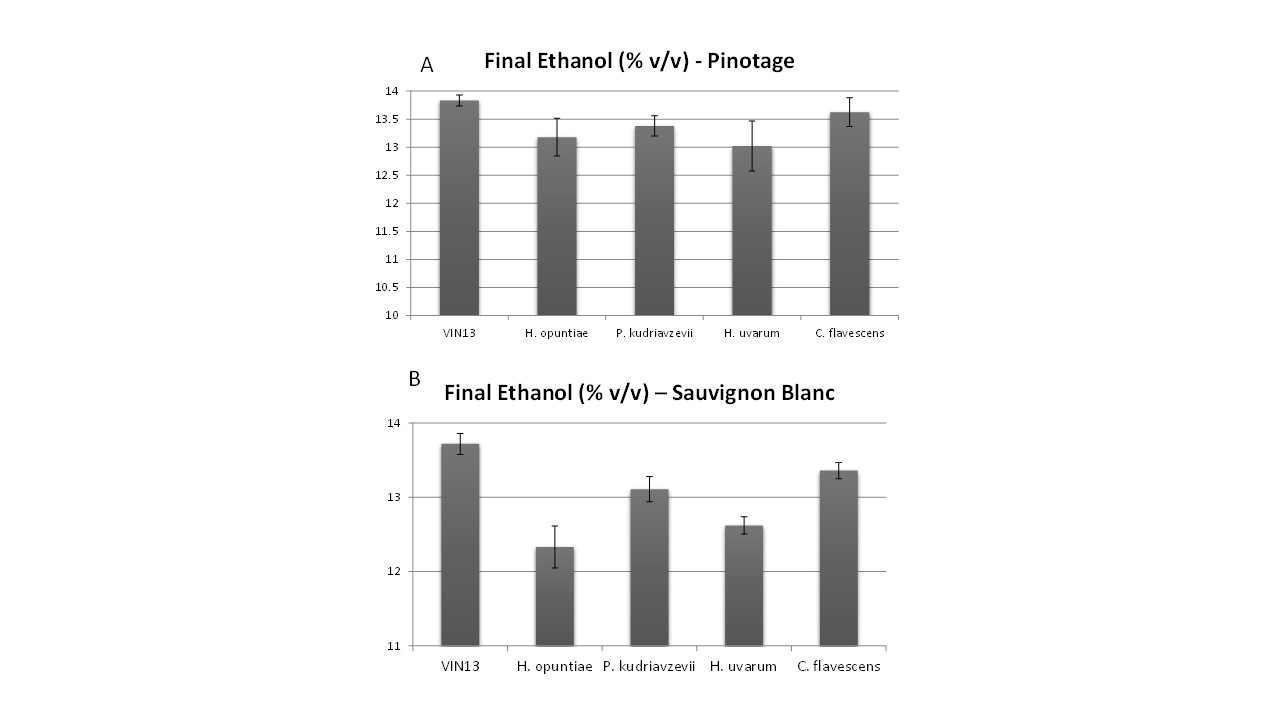 FIGURE 4. Final ethanol levels at the end of fermentation of Pinotage (frame A) and Sauvignon blanc (frame B) grape must inoculated with different non-Saccharomyces yeast strains. All data are the average of four repeats ± standard deviation. Percentage units are in volume ethanol/total volume (v/v) (Adapted from Rossouw et al., 2016).

The strategies and results shown above clearly demonstrate the potential of microbiological strategies to control the final ethanol concentrations of wine. While current commercial wine yeast strains do not differ significantly in ethanol yields, even when environmental parameters, such as temperature, pH and YAN are modified, engineered strains of S. cerevisiae clearly demonstrate that this species can in principle be modified to deliver lower levels of ethanol. However, such strains would be classified as genetically modified, even though they do not contain DNA fragments from other species. At this stage, the most promising strategies for microbial ethanol reduction are linked to the use of non-Saccharomyces yeast species. Our and other research groups’ data clearly demonstrate that several species and strains that are present in the natural wine microbial ecosystem display a significant potential for use in alcohol reduction strategies. Since these species are naturally present in many grape musts, our research going forward focuses on how to better manage natural microbiological ecosystems to favour the survival and metabolic activities of such desirable species in the wine ecosystem. Such an approach would indeed be less interventionist than any currently available alternative, and be entirely relying on yeast that are naturally present in the must, without requirement for microbial inoculation.

Rankine, B. & Bridson, D.A., 1971. Glycerol in Australian wines and factors influencing its formation. American Journal of Enology and Viticulture 22: 6 – 12.

This article originates from research funded by Winetech and the final report of project IWBT Y 08 01 (Low ethanol yielding yeast) can be downloaded from http://www.sawislibrary.co.za/dbtextimages/BauerFF7.pdf.