The migration of flavour contaminants through bottle closures 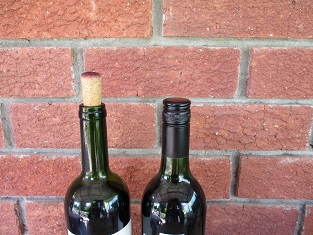 The bottling of wine with the subsequent closing of the bottles is the final process before the wine is drunk by the consumer. It is consequently mostly accepted that changes occurring in the wine afterwards are the result of the interaction between compounds in the wine. Bottle closures are also often evaluated and new closures are developed to ensure that the bottle is effectively closed and cannot contaminate the wine in one way or another.

If the question, whether a wine can be contaminated by a contaminated environment after bottling is answered affirmatively, a next question will arise regarding which bottle closure will offer the best protection against the contamination.

Gas can migrate in two different ways through a closure into the wine. According to the pore theory, gas moves through microscopic pores in the closure, which are not visible with the naked eye. According to the solution-diffusion theory, the gas is first dissolved in the material of the closure, whereafter it moves through the material as result of a concentration gradient and eventually leaves the other end of the closure by evaporation.

Commercial closures are evaluated as result of their oxygen transfer rate (OTR). It is a function of the chemical and mechanical properties of the closure. In general natural corks are seen as impermeable for gases, with an OTR-value of 0. The same applies to screw closures if the liner is not damaged. Synthetic corks however, have a variation of permeability or OTR-values. If certain bottle closures can thus allow the migration of oxygen, it is not far-fetched that other gases with a similar molecular size will also permeate the closures. Two volatile compounds of such nature, which are also undesirable contaminants in the cellar are phenols and halo-anisoles. The most important volatile phenols that can cause sensory contamination of wines are 4-ethylphenol (4EP) and 4-ethyl-guaiacol (4EG), which are formed by Brettanomyces. Depending on its concentration it can either be positive by contributing to the flavour complexity of wines, or in high concentrations it can cause unacceptable medicinal or barnyard characters in wines. Halo-anisoles like trichloro-anisole (TCA) or tribromo-anisole (TBA) can impart a mouldy character to the wine and the sensory threshold concentrations of these compounds are also very low.

A bottled Portuguese white wine was closed with five different bottle closures as indicated in Table 1. Thereafter it was tested for the migration of TCA, 4EP and 4EG through the closure. This was done by keeping bottled samples at room temperature for one, 12 and 30 months respectively in aluminium bags with the three potential contaminants as atmosphere. The migration of the contaminants in the closures was monitored by extracting and analysing it at three levels in the closure. The three levels were on the side of the closure exposed to the contaminated atmosphere, the middle of the closure and one on the side of the closure exposed to the wine.

In the case of the natural and agglomerate cork, TCA and 4EP were observed within one month on the surface, which was exposed to atmospheric contamination, while 4EG was only observed after 12 months. No traces of any of the other contaminants were observed on the other parts of these closures. This implies that cork limited all contaminants to 10 to 12 mm of its outer surface. Agglomerate corks did however have a higher concentration of the contaminants in the named area.

With synthetic corks, high concentrations of all contaminants were observed in the outer surface of sample 1 and within 12 months all three contaminants migrated over the full length of the closure. TCA and 4EP were also observed after 12 months in the wine, while 4EG was only observed after 30 months, because it has a low diffusion coefficient. In the case of sample 2 of the synthetic cork, all the contaminants migrated to the middle of the closure within 12 months, but it was only observed on the wine surface of the closure after 30 months. It also took a long time to be observed in the wine. The contaminant did not only take longer to migrate through sample 2, but the observed concentrations were also lower. It is unknown whether this is due to the composition of the sample or the additional length of 2 or 4 mm or both.

The screwcap closure differed regarding the three contaminants. TCA was observed in the liner within one month, while 4EP and 4EG was only observed within 12 months and 30 months respectively. The contaminants also migrated into the wine after 12 months for TCA and 4EP and 30 months for 4EG respectively. A considerable variation was found with screwcap closures, which may be attributed to the fixation of the liner to the metal.