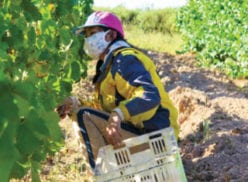 The sleeping dragon has awakened and it’s thirsty. China is determined to make its mark on the world wine market and has already shown it’s a force to be reckoned with.

In the short film series Food Forward, Silver Heights owner-winemaker Gao Yuan calls China’s ambition to create the next Napa Valley in Ningxia “a new world in the New World”. But while Napa did it over a century, China has achieved the near impossible in a decade.

In 2015 Reuters reported that China had overtaken France as having the second largest area planted with vines. And what a meteoric rise it has been. Since the beginning of this century, China has doubled the land devoted to vines to just under 800 000 hectares, according to the International Organisation of Vine and Wine (OIV). In 2015 China accounted for 10.6% of the world’s vine-growing area, compared with France at 10,5% and the world’s number-one grower, Spain, at 13.5%.

“It’s all government driven,” says Lieben Wines’ Alwyn Liebenberg, who consults in China as a so-called flying winemaker. He will return to the country for the ninth time later this year. “The government has decided for example that Ningxia, formerly a fairly poor coalmining area, will be the world’s next Bordeaux. Ningxia borders the Gobi Desert and since most of China’s population lives on the coast, they want to make this area attractive for development in order to utilise the whole country. To get prospective wine producers started, the government often gives them soft loans of which only a part is repayable. All the big companies are here: Moët Hennessy, Pernod Ricard and many of the biggest Australian labels.”

The soil in Ningxia is ideal for viticulture and, despite being an arid semidesert, the Yellow River runs through the area. In some parts, drilling 200 metres deep has resulted in an abundance of fresh water. With government aid, dams are built and complex irrigation schemes installed, transforming barren landscapes into rolling vineyards. The government plans to see 200 wineries settled here by 2020, according to a New York Times article published in 2015.

Like Bordeaux, Ningxia lies on the 38th degree latitude. Gao Yuan, also known as Emma, learnt her winemaking skills in France and returned to the family farm with her French husband, Thierry Courtade, to head up Silver Heights Vineyard.

In a Wall Street Journal blind tasting involving influential tasters such as the first Asian wine master, Jeannie Cho Lee, the Silver Heights Cabernet Sauvignon, along with a Grace Vineyards Cabernet Sauvignon from the Shanxi region outperformed the likes of Châteauneuf-du-Pape, leaving the tasters astounded. It seems the Gobi Desert with its dry, gravelly soil can produce great wines if the vineyards are nurtured correctly.

“There are some beautiful wines that come from this area,” Alwyn says. “But I think there are even better sites for winemaking in China. You won’t find the quality in a R60 equivalent bottle as you would in South Africa. But spend R3 000 and you’ll really see some fantastic wines.” He recently consulted for a French-Chinese company where he made wine on the Tibetan side of China. “I lived in the mountains among women who only speak Tibetan. They have an ancient winemaking culture where everything is done by hand, from picking to sorting, and the wine is bottled in urns. The wines fetched ridiculous prices and the whole harvest was snapped up in downtown Shanghai.”

Of course, it’s no use growing great grapes without growing the market along with it. Trying to establish yourself as the next Napa means convincing international wine buyers and getting them interested. And the Chinese are doing this in innovative ways. Mountain Ridge’s Justin Corrans knew nothing about China when he was invited to take part in the Ningxia International Winemakers Challenge in 2015. It was a brilliant marketing ploy to get Ningxia in the spotlight as a premier winemaking region. Justin, Alwyn and Carsten Migliarina, also of SA, were three of 48 winemakers from 17 countries who were invited to take part in the two-year-long winemaking challenge. Each contestant was paired with a local winery and the challenge was to make wine. Justin was paired with Domaine Lanxuan, and on 29 August last year a panel of international judges declared him one of five gold winners for his Cabernet Sauvignon and the overall winner.

“One of the challenges of making wine in a desert is the incredible temperature fluctuations,” Justin says. “In winter it can often get as cold as -20 oC and they have to bury the vines to protect them.” Last year, China launched Cabernet Sauvignon, Merlot and Pinot Noir vines into space aboard the Tiangong-2 laboratory in the hope it would trigger mutations that would make the plants more suitable for the harsh climate and resistant to drought and viruses.

Temperature fluctuations is not the only problem in Ningxia. “China is now facing the same problem South Africa did about 30 years ago,” Justin says. “They’re struggling to get good clonal variety. And remember, they’re all first-generation wine drinkers, winemakers and viticulturists, so they must consult widely to make up for a lack of experience. They’re adapting very quickly and the industry is really only a decade old, so there’s a problem to get good virus-free material.”

Mike Veseth, editor of the blog The Wine Economist, writes that getting control over land is not easy in China. Many producers still have to work in large part with hundreds of small family-run vineyards. Some are coping with this difficult supply chain by building relationships with the producers. They rent land to their own labour force and provide training and credit in exchange for inputs.

China has since 2013 been the biggest consumer of red in the world, according to a report by France24 English. In Spiros Malandrakis’ summary of key trends for the wine industry in 2018, published on just-drinks.com, he predicts China will accelerate the transition from wine as a luxury item to a mass-market seller, “a development that will, in turn, shape the global wine industry, both in terms of supply and demand as well as in branding and positioning”.

Justin and Alwyn agree the Chinese are serious Francophiles. “If it sounds French, it must be good,” Corrans says, hence the emphasis on French classics such as Cabernet Sauvignon. But Justin adds, in his opinion, in Ningxia especially they can do a lot better with earlier ripeners such as Merlot or Pinot Noir.

Author Li Demei, a regular contributor to Decanter China, says Marselan is another varietal with huge potential. He was the winemaker for Domaine Franco-Chinois when he made the first Marselan wine in China on the recommendation of French consultants. “I believe the potential of Marselan lies in its high productivity, flexibility to the environment, complex and beautiful flavours, rich and concentrated palate, and potential to be made into different styles.”

In an article on the Chinese wine-growing climate, he says areas that are generally referred to as “wine regions” in China, are in fact administrative divisions. The one with the longest winemaking history is Shandong province, and particularly the Shandong Peninsula and its Yantai region. Wines from Shandong and Hebei provinces account for over half of wines in the Chinese wine industry, by both yield and output value. Other areas where wine is made are Beijing, Tianjin, Shanxi (where another internationally acclaimed winery, Grace Vineyard, is situated), Shaanxi, Jilin, Liaoning, Xinjiang Uyghur Autonomous Region, Ningxia Hui Autonomous Region, Gansu, Inner Mongolia Autonomous Region, and Yunnan and Sichuan provinces, the latter which borders Tibet.

Whether such a phenomenal growth curve can be sustained, remains to be seen. It’s reassuring that the Chinese public is increasingly embracing wine as an everyday beverage, thereby broadening the total wine-buying public, which can only be good for the global wine business. l