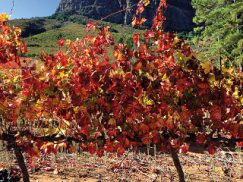 More than 70 infectious agents have been recorded from grapevines, including 65 viruses. This represents the highest number of intracellular pathogens found in a single crop. Grapevine leafroll disease (GLD) is one of the major diseases affecting grapevine and occurs in all vine-growing regions of the world. Grapevine leafroll-associated virus 3 (GLRaV-3) is the main virus mostly associated with GLD. In this study we focused on detection of the viruses in GLD symptomatic plants collected across the main wine-producing regions in South Africa. The composition of virus populations in GLD-symptomatic plants and the relative abundance of GLRaV-3 variants were determined.

A total of 315 plants were sampled and analysed over two growing seasons. The five GLRaV-3 variants were detected as either single or mixed infections, with GLRaV-3 variant groups II and VI being the most prominent as single infections and in combinations with each other and other variants. An analysis of the distribution of variants per region showed that single infections of variant groups II and VI occurred predominantly in certain regions (Figure 1), and were equally distributed in the red and white cultivars studied. The overall analysis showed that infection with variant groups II and VI were the most abundant among the samples with 49.8% and 47.6% respectively, followed by variant group I, group III and group VI with 16.2%, 2.5%, and 13.3% infection respectively (Figure 2). Mixed infections, represented by 36 different virus combinations, were found in 251 plants. The most abundant virus combination was GLRaV-3 with Grapevine virus E (GVE), found in 28% of the plants. GLRaV-3 was the predominant virus detected in the samples with a frequency of 80% detection, followed by GVE (57.4%), Grapevine rupestris stem pitting-associated virus (GRSPaV) (36.8%), Grapevine virus A (GVA) (19.3%), Grapevine virus F (GVF) (16.25%), Grapevine leafroll-associated virus 2 (GLRaV-2) (8.25%), Grapevine leafroll-associated virus 1 (GLRaV-1) (1.58%) and Grapevine leafroll-associated virus 4 (GLRaV-4 like) (0.6%). Most of the plants tested were infected with multiple viruses. The information generated in this study will assist in the development of reliable detection assays that will benefit the monitoring of disease spread and aid in the efficient management of GLD. 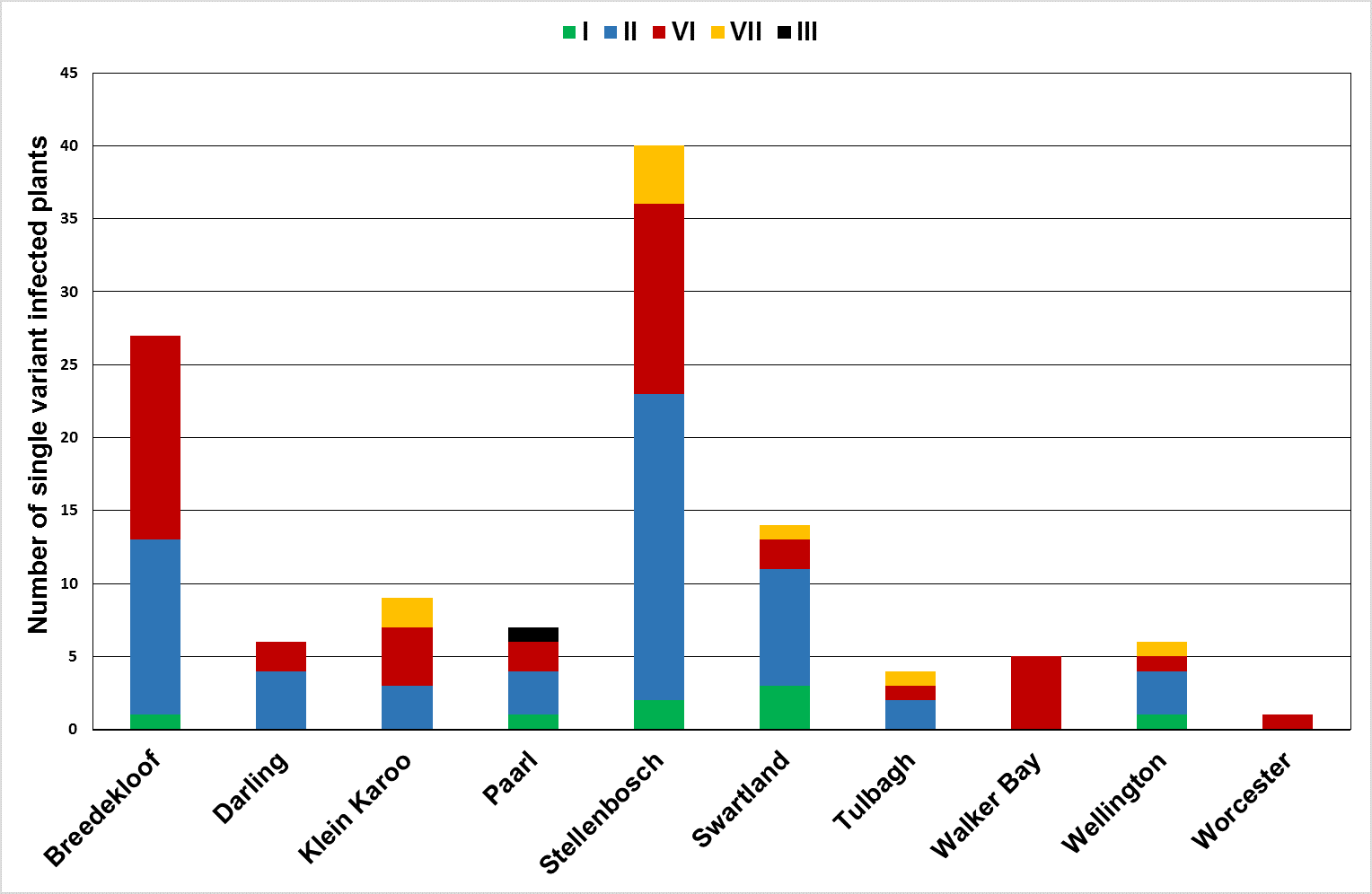 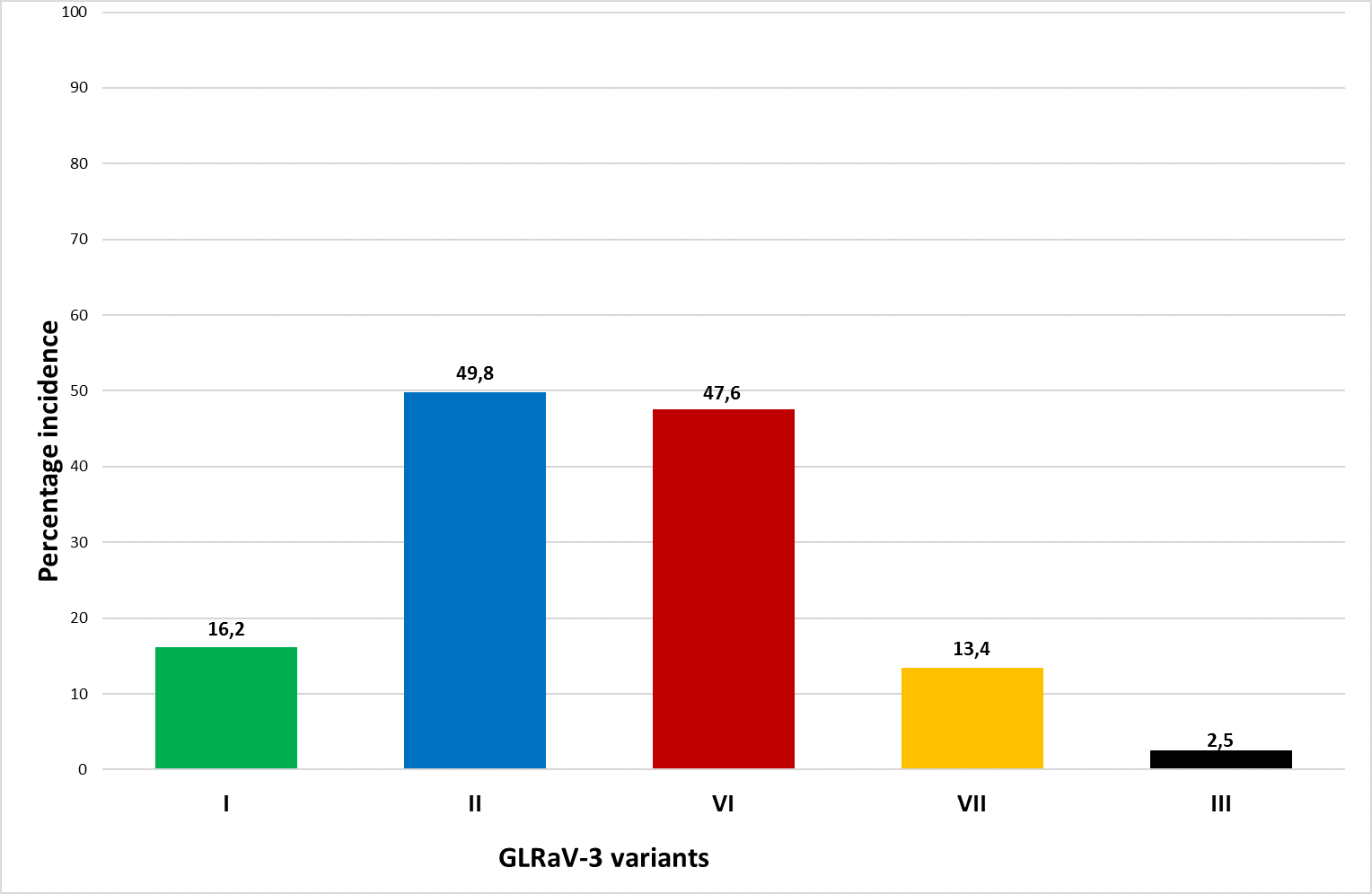 Virus-specific primers with appropriate positive controls were used in RT-PCR to detect GVA, GVE, GVF, GLRaV-1, GLRaV-2, GLRaV-3, GLRaV-4–like viruses and GRSPaV. There were 50 plants with single virus infections of GLRaV-2, GLRaV-3, GLRaV-4, GVE, GVF, and GRSPaV. GLRaV-3 was found as a single infection in 29 of these plants and GRSPaV was found as a single infection in 13 plants. Most of the plants tested were infected with multiple viruses. Mixed virus infections were found in 251 plants, represented by 36 different combinations of eight grapevine viruses. The most prevalent mixed virus infection, GLRaV-3/GVE, was detected in almost 28% of mixed-infected plants. The next most prevalent mixed virus combinations were GLRaV-3/GVE/GRSPaV, GLRaV-3/GRSPaV and GLRaV-3/GVA that occurred in 8% to 10% of plants (Table 1).

TABLE 1. Mixed virus infections detected in 270 plants of the survey. 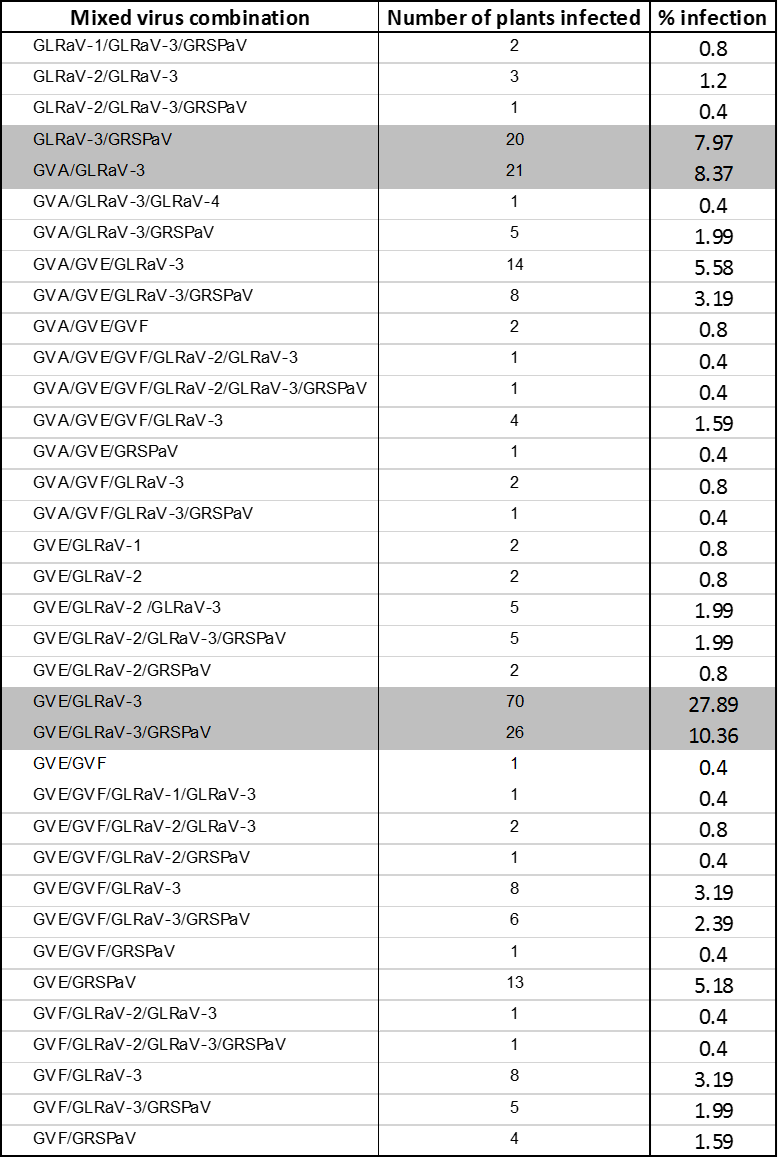 The distribution of the different viruses per cultivar was analysed. Samples were collected from vineyards planted with the following red and white cultivars respectively: Cabernet Sauvignon, Merlot, Shiraz, Chardonnay, Sauvignon blanc, Chenin blanc and Viognier. GLRaV-3 infected all the cultivars sampled during this study. The other GLRaVs, which were detected at lower frequencies, were distributed evenly in white and red cultivar plants, and with no prevalence in any specific cultivar. The Vitiviruses (GVA, GVE and GVF) and Foveavirus (GRSPaV) were detected widely in most cultivars sampled. The percentage incidence of each virus is seen in Figure 3. 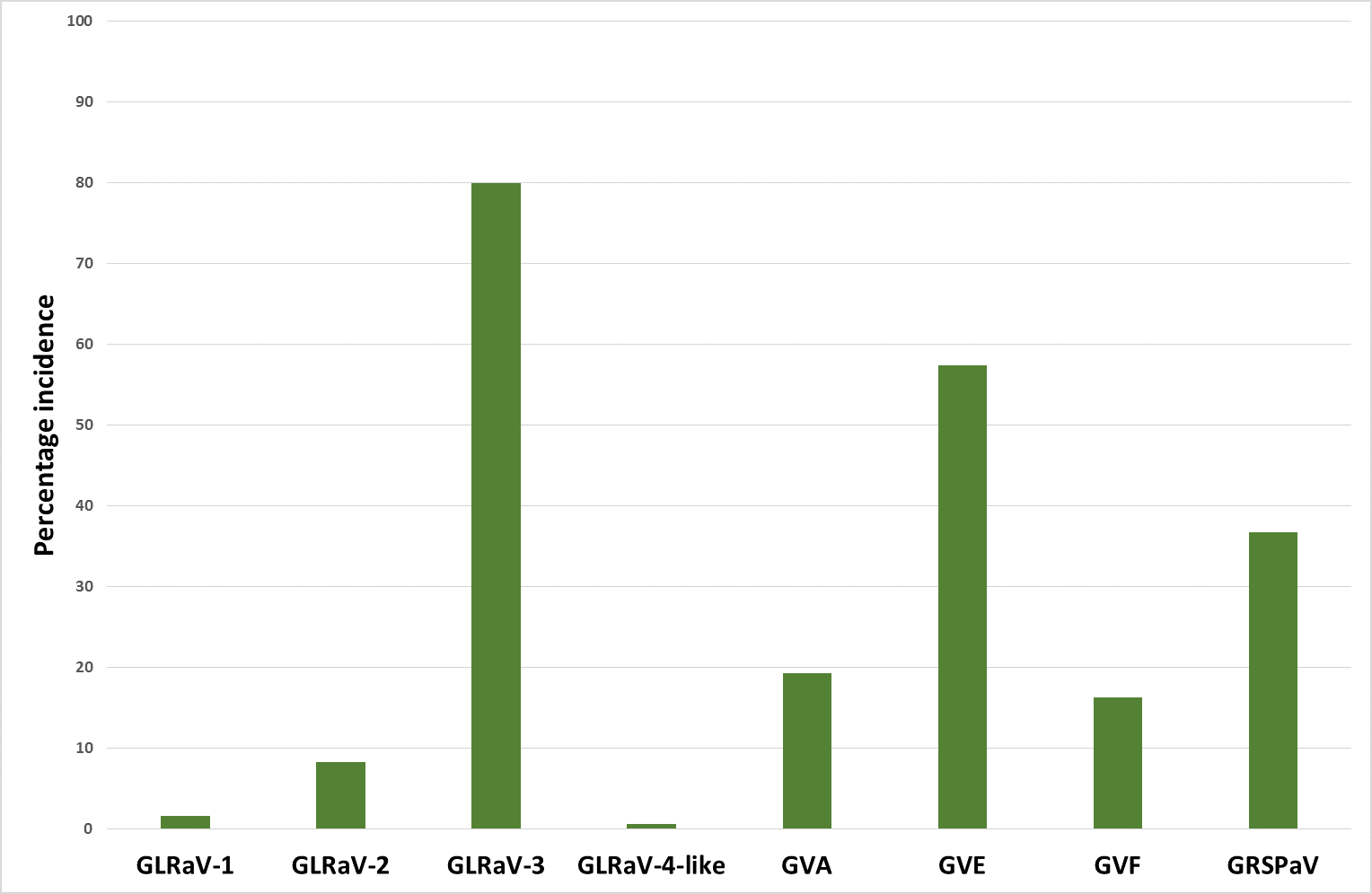 This study demonstrated the complexity of virus- and GLRaV-3 variant infections in South African vineyards. Despite the fact that plants displaying GLD symptoms were targeted for the survey, 20% (mainly white cultivars) of the collected plants were not infected with GLRaV-3. The absence of distinct symptoms in most white cultivars, renders the diagnosis of virus infection based on visual inspection of vineyards impractical, and highlights the necessity of accurate and sensitive detection methods to screen large numbers of plants, especially when planting material that will be distributed to producers.

Surveys of viruses affecting grapevines in the wine regions of the Western Cape Province of South Africa were conducted over the past number of years. The first survey was conducted during the 2010 growing season. This survey was aimed at determining the spread of a newly discovered Vitivirus, Grapevine virus E (GVE). The second survey focused on plants showing typical grapevine leafroll disease (GLD) symptoms. In South Africa grapevine leafroll-associated virus 3 (GLRaV-3) is the virus most consistently associated with GLD. The current study determined genetic variation among GLRaV-3 isolates, as well as the relative abundance of five GLRaV-3 genetic variants in GLD-affected vines. In addition, the viral diversity for individual vines was determined in order to provide an overview of the most abundant viruses in vineyards from the different wine growing regions. The majority of infections were detected as mixed infections in plants. The complexity of virus populations detected in this study highlights the need for detection methods able to identify all grapevine-infecting viruses, and their genetic variants in vineyards.

The research in this study was funded by the South African industry partner, Winetech, in collaboration with the National Research Foundation’s THRIP programme. We wish to thank Nico Spreeth and Reinier Louw from Vititec, assisting with data of the survey localities. We thank the grapevine growers in the Western Cape for allowing us to work on their farms. We acknowledge the technical contributions of N. Molenaar, W. de Koker, and R. Bester in this study.