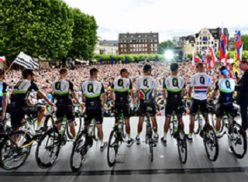 The 2017 edition of the Tour de France comprises 21 stages and covers a gruelling 3 540 kilometres, which demands the highest skill, extraordinary discipline and unyielding will to succeed. The pro-cycling team (which exhibits all of these qualities), affectionately known as “Africa’s Team”, pedal for a cause. They raise funds and awareness for Qhubeka, a non-profit organisation that mobilises for socio-economic progress by distributing bicycles to needy South Africans in exchange for work done to improve the environment, community or academic results. Since its inception in 2005, Qhubeka has distributed bicycles to over 70 000 deserving South Africans.

“Nederburg is actively supporting this great cause, not only via its partnership with the Team Dimension Data cycling team, but also by housing Qhubeka’s first bicycle assembly facility in the Western Cape at our brand home in Paarl, and funding some 200 bicycles for distribution in Cape winelands communities and beyond during the course of 2017,” says Robyn Bradshaw, Nederburg’s global brand development manager.

“As a winning wine team, Nederburg believes in backing great talent, especially when it’s for a great cause. We are fully behind Africa’s pro-cycling squad and especially proud to be helping Qhubeka change more lives,” Bradshaw affirms.

Show your support for Team Dimension Data, as well as Qhubeka, by joining Nederburg’s conversation on social media: