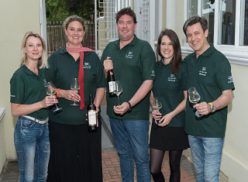 When Team South Africa 2017 competes against 27 wine tasting teams from across the globe at the World Blind Tasting Challenge in Nuit Saint George, France, on 14 October 2017, Nederburg will be right behind them as official partner.  The team will be one of only two representing the African continent, sharing the honour with their very skilled Zimbabwean counterpart.

The members of Team South Africa 2017 all qualified via the South African Wine Tasting Championships (SAWTC) national competition in July, which involved three finalists from Johannesburg and eight from Cape Town. The competitive tasting featured six white and six red wines, tasted blind. Finalists had to identify as many aspects of the wine as possible, such as wine-growing area, vintage, winery and country.

Wine marketer Anita Streicher-Nel was announced the national champion, scoring the highest mark in the final, thereby securing her the position of team captain. This is the third time she participates internationally as a member of Team South Africa, and her second year serving as captain.

Winemaker Anton Swarts, a recently qualified Cape Wine Master, secured second place. It will be the second time that he competes as part of Team South Africa. The first time was in 2013.

Winemaker Jolette Steyn automatically qualified for a place in the team by virtue of achieving the highest marks in both provincial legs of the competition.

The reserve position went to Nkulu Mkhwazani of Johannesburg, who made his debut at the South African Wine Tasting Championships (SAWTC) in 2017.

Team South Africa 2017 is managed by Jean Vincent Ridon, an accomplished winemaker, sommelier and chef, and head of the Sommeliers Academy, the first and only local school providing formal training in its own, as well as South African Sommelier Association (Sasa) and Association de la Sommellerie Internationale (ASI) accredited programmes. Sasa is the only industry body in South Africa recognised by the ASI, and the Sommeliers Academy run by Ridon, the only ASI certified sommelier in Africa, is the only local school offering Sasa courses.

“They’ve just had the opportunity, earlier this week, to taste a number of Nederburg’s experimental tank samples and some of our award-winning bottled wines, alongside international equivalents. Winning – even just placing in the top 10 in France – will certainly not come easy, but we have the utmost confidence in their enthusiasm and the very impressive knowledge and skills set they bring to the table as a team.”

Team leader Ridon commented that the team, who trained with Team Zimbabwe, found it extremely interesting and educational to taste a variety of Nederburg wines together with international benchmarks, and facilitating discussion around the influence of place, and key characteristics of certain cultivars.

“We particularly enjoyed tasting experimental tank samples of Nederburg’s Graciano, Tempranillo, Cinsaut and Tannat. And Heritage Heroes The Anchorman Chenin Blanc 2015 really stood out! Nobody could place it anywhere except for great terroir. It was a great opportunity to benchmark our local industry against international offerings, and give team members the chance to taste wines they’ve never tasted before. This type of exposure is incredibly valuable in preparing for competitive global tasting events,” he said.