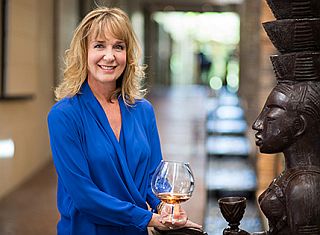 The South African Brandy Foundation has expressed its concern about the recently announced excise duty hikes for brandy, claiming they could pose a major setback for producers and impede recent entrepreneurship, training and job creation initiatives.

Speaking on behalf of the country’s brandy industry, the Foundation’s director, Christelle Reade-Jahn, said that ironically, the above-inflation hikes had come just as the industry was seeing the first green shoots of recovery after a succession of many lean years.

The excise duty for blended brandy will rise by 8,5%, resulting in an increase from R175,19 per litre to R190,08 per litre. Potstill and vintage brandies, that have earned widespread international critical acclaim, are to be even harder hit. The 14,6% excise tariff increase will push the per litre level from R149,23 to R171,07.

“Not only are both these new tariffs significantly above inflation, but they could impact the trajectory of the industry’s recovery path. The granting in 2016 of a 10% lower differential excise tariff for potstill brandy compared with other spirits, has given this premium brandy category a much-needed boost. Significantly, with the increase in potstill sales, greater awareness and support have begun to develop, generating exciting new opportunities in craft brandy. Now, the reduced differentiation for potstill brandies could dent our initial headway in developing the craft sector and make it more difficult to bring additional craft players on board.

“At the same time, our concern is that the 8,5% excise tax could hurt the nascent recovery of the blended brandy category, which is where the most significant job multiplier economic impact lies, since it accounts for the biggest volume of brandies consumed.

“It is important to remember that brandy is a highly labour-intensive industry and thus a key job generator in the Western Cape. We need to protect and grow those jobs and encourage South Africans to buy local, knowing that our brandies are internationally regarded as world-class.”

At its peak, she said, South Africa’s total annual brandy consumption was close to 49 million litres. “Then, with the withdrawal of the brandy tax rebate in 2006, sales began to plummet year-on-year, eventually falling in 2015 to just over 30 million litres.

“After extensive lobbying by the industry, in 2016, the Ministry of Finance introduced the differential relief, stimulating a slow but steady recovery for the industry. Currently, the consumption level is back up to almost 33 million litres a year and growing.

“Apart from nudging up sale volumes, the move has really helped to premiumise brandy. Annual sales value is currently up by 22% on 2016.”

She said that Government intervention, coupled with the support of the retail and on-premise sectors, as well as active marketing efforts by brandy producers to promote local tourism and boost cellar-door sales, had all been bearing fruit.

Buoyed till now by the fledgling recovery, the Foundation had been able to establish an entrepreneurial hub to develop a craft brandy movement.  Through its producer network it had also been creating training, mentoring and internship opportunities for new entrants to the industry.

“Our organisation has been working closely with producers to upskill talented young people keen to acquire technical production, marketing, sales and business skills.  We are also running an extensive educational drive, working with upmarket bars, restaurants, hotels and lodges, training sommeliers and other service staff.”

In addition, the Foundation was engaged in a BBBEE project in the Northern Cape, established to supply grapes to the brandy industry, she said. The public/private partnership involving both the national and Northern Cape departments of agriculture and a community on the Orange River was aimed at capacitating emergent farmers. “We plan to expand this initiative to emergent farmers in the economically marginalised Eastern Cape and Klein Karoo, contingent upon access to the necessary water,” Reade-Jahn confirmed.