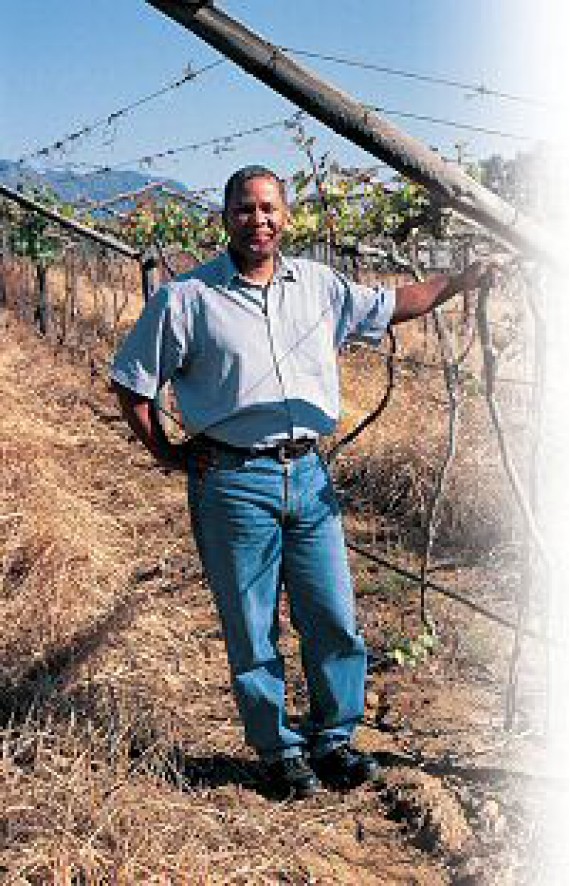 The CV of Charles Erasmus is an impressively lengthy list of career accomplishments. Recurring themes are socio-economic development, and negotiating between government and communities. Scanning the pages, skills frequently mentioned include strategic thinking, planning, lobbying and conflict resolution. Presumably these qualities were significant factors that swayed Erasmus’ appointment as CEO of the South African Wine Industry Trust (Sawit).

Erasmus grew up in the wheatfields of Wolseley in the Western Cape. He was inspired by the philosophy of Steve Biko, hence his three-year-old son is called Biko. He kicked off his career with theological studies at the University of the Western Cape, and was exposed to foreign views when he accepted a scholarship at Wycliffe Hall in Oxford, England, focusing on ethics within theology. During four years with the Institute of Democracy in South Africa (Idasa), Erasmus says he worked closely in planning processes aimed at easing the transition of an old to new South Africa.

During his next position with the Ministry of Public Services and Administration, a major challenge was managing a bi-lateral transformation agreement between South Africa and the European Union (EU). “Our task was to fast-track the development of black-empowered senior management in government. This was after 1994, where there was a lot of concern about who would replace the old guard in management,” he explains. “In a sense, my Sawit objectives are very similar. The organisation may be different, but the focus is black economic empowerment (BEE), which is part of the government’s transformation strategy.”

His most recent position was director of the Dopstop Association, where Erasmus focused on helping rural communities take control over social diseases, especially alcoholism. Erasmus sees the jump to Sawit as a means to support wider forms of social development within the industry, using his experience in strengthening social development initiatives.

He is particularly proud of being one of the founding members of the Western Cape Rural Development Network (Rudnet), which comprises 35 NGO’s – he resigned as director and chairperson with his appointment at Sawit. Rudnet was set up to co-ordinate and manage the efficient supply of welfare and other services between communities and NGO’s. Erasmus plays a key role in the Black Association of the Wine & Spirits Industry (Bawsi), as director and trustee. He defines Bawsi’s goals as empowering black South Africans in terms of shareholding, ownership and management within the wine industry.

He’s had his hands full from day one on the new Sawit job, after immediately being roped into final negotiations between Bawsi and KWV South Africa. The wine company offered 25,1% of its shares to an empowerment group, and the successful bidder was Phetogo Investments, a grouping of black empowerment groups and individuals, including groups such as Bawsi and the KWV Employment Trust. Erasmus sees the outcome as the “most significant empowerment deal to date within the wine industry and agricultural sector”, with Phetogo Investments now owning KWV South Africa shares worth R200 million.

Negotiations aside, Erasmus has strong ideas about how Sawit can be more relevant in an empowered wine future. To date, there’s been criticism of Sawit’s role as a ‘token’ funding NGO, but he plans to introduce a business focus and operate Sawit as a viable empowerment vehicle. A first step is amending the Sawit trust deed to accelerate transformation – completing the BEE charter due in March 2005 for instance – so Sawit can drive and facilitate the process.

Secondly, Sawit will consolidate five years of existing investments in social development, through assessing impact and ensuring returns on those investments – in other words, really changing lives in the empowerment of black communities.

Sawit’s current financial resources won’t be sufficient to sustain BEE initiatives, so Erasmus plans to support Sawit trustees in developing a “recapitalisation strategy” to fund future projects. “KWV put up R369 million in its agreement with government. Sawit is the conduit of this money, but there isn’t sufficient funding,” he explains. “We’ll be looking at alternative funding sources, or restructuring of existing BEE budgets. Specifics such as technology transfer, generic wine marketing and research to BEE candidates will be part of this.”

It’s a tough job combining the objectives of diverse social groups and finding a common goal, so I asked Erasmus how he can be sure the empowerment role players are truly committed. He admits it’s a challenge, but says the reaction to his own appointment has been positive so far.

“From the black communities, people say they’re encouraged by the idea that if I can do it, they can too. They’re saying they have more access to opportunities, more open communication, now that one of their own has been promoted to a level of responsibility. It’s no good to have somebody distant from the critical processes of social reform and services, so hopefully my background will help.”

Still, making a significant difference is a tall order, and Erasmus isn’t taking the responsibility lightly. “I had a lot of questions when the KWV-Phetogo deal was put together, about whether the BEE role players are adequately equipped with the relevant skills. I think there is a critical mass of competent skills within the industry. They’re only a small group now, but part of my role is to be a catalyst to strengthen and develop that talent.”

The Cap Classique Producers Association has re-positioned its marketing objectives to highlight the importance of time in the making... END_OF_DOCUMENT_TOKEN_TO_BE_REPLACED

The South African wine industry acknowledges the greater understanding from government with the announcement of the latest excise duties... END_OF_DOCUMENT_TOKEN_TO_BE_REPLACED

The wine industry body Vinpro recently appointed Dr Langelihle (Langa) Simela to its board to provide strategic insights into... END_OF_DOCUMENT_TOKEN_TO_BE_REPLACED
Go Back
Shares