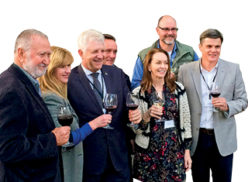 Years of hard work and planning have eventually paid off with the unveiling of the Wine of Origin Cape Town district.

South Africa’s burgeoning wine industry was given a massive boost and is expected to attract even more international attention after the launch of the new Wine of Origin Cape Town appellation in the Mother City’s Company’s Gardens on 1 June. The unification of the Constantia, Durbanville, Philadelphia and Hout Bay wine wards under the Wine of Origin Cape Town district follows years of planning and hard work before being finally approved by the South African Wine and Spirit Board. The move has been welcomed across the board and adds to the global recognition of Brand Cape Town.

“The value of what happened here is an absolute no-brainer,” Western Cape minister of economic opportunities Alan Winde says. “Brand Cape Town is internationally acclaimed and has developed into a global powerhouse. To now have the new Wine of Origin Cape Town district is such a cool idea. It will promote everybody in this country, not just those involved in the wine industry.”

The focus that has been put on the Western Cape’s growth is paying off, he added. “This new district speaks to the economy of this region, which is largely based on tourism and agri-processing. Agriculture and agri-processing alone provide jobs for about
448 000 people.

“Two important questions that are often asked are, ‘How do we sell more wine in bottle” and ‘How can we create jobs?’ Wine of Origin Cape Town is a step in the right direction as it’s aligned with the Western Cape’s Khulisa economic strategy, which was set in motion to grow jobs in tourism and wine.”

A series of dramatic events that started with Jan van Riebeeck’s arrival in the Cape in 1652 lead to the establishment of Wine of Origin Cape Town, Constantia Wine Route chairperson John Loubser says. “Jan van Riebeeck had a vision of vineyards adorning the hills of Table Mountain and surrounds. He planted the first vines in 1655 in the Company’s Garden. The first wine was made in 1659 and what started as a mere 15 litres almost
400 years ago has blossomed into a viable and important industry.”

These events have culminated in the launch of the Wine of Origin Cape Town appellation on the very spot where the first vines were planted in 1655.

VinPro MD Rico Basson stresses the importance of collaboration among the various wards and wineries to form the new district. “Collaboration in agriculture is not as commonplace as one might expect, but we persevered and the final result is incredible. Our wines are world class, as are the various wine routes, and if we look at Cape Town we can revel in its rich heritage, culture and modern wine styles.”

“South Africa’s Wine of Origin legislation is acknowledged and highly respected as one of the world’s best in terms of implementation and regulation,” Rico says. The Wine of Origin Cape Town district represents a winemaking and grape-growing entity with vast similarities.

Wines of South Africa (Wosa) CEO Siobhan Thompson echoes Rico’s sentiments about collaboration. “This is a fantastic example of collaboration which will ultimately lead to a boost in tourism, job creation and wine sales. Not only the region will benefit from this new district, but also South Africa and particularly South African wine. Cape Town is immensely popular abroad and we’re embracing this aspect fully.”

Duimpie Bayly, chairman of the Wine and Spirit Board’s Demarcation Committee, says it was meant to be. “We looked at the various wards of Constantia, Durbanville, Philadelphia and Hout Bay and found great similarity in terroir, as well as clear boundaries in a district that at its furthest point is 36 km from the Cape Town city centre. While the marketing potential of the new district was important, we remained scientific in determining the physical similarities of the wards.”

Duimpie was present at the inception of the South African Wine of Origin system in 1973 and has been intimately involved with the movement ever since. His passion has been influential in the establishment of 26 districts, with Wine of Origin Cape Town being the latest one.

Bernhard Veller, owner of Nitida also welcomes the new Wine of Origin Cape Town district. “Brands are extremely valuable and expensive,” he says. “And we picked up Brand Cape Town for free! The natural beauty of the region, Table Mountain and the proximity of the ocean are all things that have always been there and we can now harness them. We need to do things that are significant. We have the manpower and the resources it takes.”